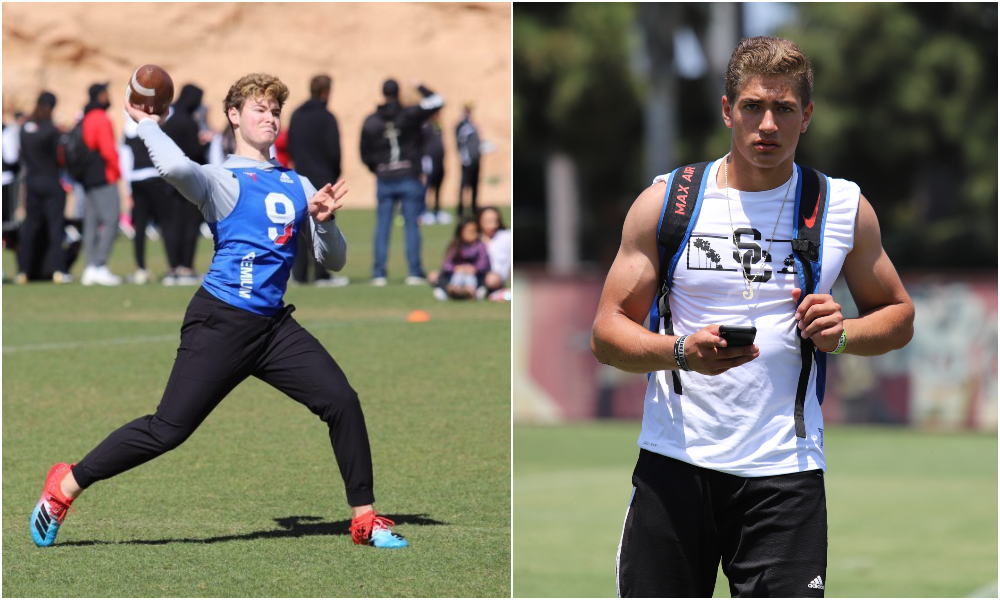 Simply put, USC had to bring in two quarterbacks in this 2021 recruiting class. And at this point–without prospects being able to officially sign letters of intent–the Trojans have surpassed expectations, landing commitments from four-star signal-callers Jake Garcia and Miller Moss. And that won’t be the last time those two names appear in the same sentence, as the two quarterbacks are headed for a duel on Howard Jones/Brian Kennedy Fields beginning in 2021.

The immediate future of the quarterback position at USC is in very safe hands, as Kedon Slovis showed during his true freshman season that with another step forward this year, he’ll be discussed amongst the best players in the country at his position. Slovis has at least two years left on the USC roster.

Beyond him, the question marks are limited because there simply aren’t many options. Absent any additional transfers at the position this summer, redshirt senior Matt Fink will be the No. 2 quarterback this year. And he’d better stay ready, as USC has used three quarterbacks in real game situations each of the past two years. Behind Fink, Vanderbilt grad transfer Mo Hasan is likely USC’s No. 3 quarterback.

USC would have been in better shape at the position had the Trojans been able to hold onto the verbal commitment from five-star quarterback Bryce Young in the 2020 class. But Young flipped to Alabama, where he is a potential starter for the Crimson Tide this fall. When Young flipped, USC chased a few options at quarterback and looked like it had a shot at Blake Shapen, but a late offer from Baylor convinced him and Shapen signed with the Bears.

A swing and a miss at the position in the last class left USC desperate to add some serious talent in the 2021 class, and as luck would have it, two of the top-10 quarterbacks in the country resided in the Trojans’ backyard. Garcia didn’t need a ton of time, as he committed in September of last year. At the time, it looked like Moss could easily slide across town and become a huge part of UCLA’s 2021 recruiting class.

But as Moss said in a story he penned for SI: “I grew up wearing Matt Barkley’s jersey to the park, Mark Sanchez’s jersey to the park. I could tell you where I was when Sam Darnold won the Rose Bowl and he threw that ball to Deontay Burnett over the middle. The idea that I have this opportunity to do the things that those guys have done is still surreal to me. It’s still something that I haven’t completely wrapped my head around. USC was my school growing up and obviously I’m an L.A. kid.  It’s hard, growing up in that area, to not be partial to USC.”

While there are some similarities and differences in their on-field skills, the first thing that has to jump out about both of these quarterbacks is that they are knowingly diving head first into a quarterback competition before they even step foot on campus. That drive to compete and be completely comfortable with the fact that they aren’t the only quarterback–and aren’t even the only highly-ranked quarterback–speaks volumes about the competitive nature and drive to challenge themselves. It’s not ever year that one program signs two of the top-10 quarterback prospects in the country. Texas did it in the 2020 class, but before that, it was Penn State all the way back in 2010. USC has come close twice, signing Nos. 9 and 12 in the 2014 class (Ricky Town and Sam Darnold) and Nos. 6 and 11 in the 2011 class (Max Wittek and Cody Kessler).

Make no mistake, this is not a situation where USC had to scramble and drop down its recruiting board in order to bring in a second quarterback in this class. Moss was down to Alabama, LSU and UCLA as his other finalists. These are both premium talents in this class. Garcia is a terrific athlete with a great arm and Moss has one of the quickest and smoothest throwing motions in the country.

The upcoming practice field battles between these two should be incredible, and there will likely be plenty on the line. Moss has hinted at potentially being able to graduate early and reclassify into the 2020 class, but has also said that would likely be completely dependent on there being no high school football this fall, which seems unlikely at this point. Miller is scheduled to enroll early this coming January, so that could give him a leg up if he has a spring ball session under his belt before Garcia arrives. But all eyes will be on both quarterbacks in the fall of 2021 and Slovis might be preparing for his third and final season as the USC quarterback, and these two are battling it out to be his backup, perhaps grabbing the inside track to be named the starter in 2022.

But if we’ve learned anything from going from potentially having JT Daniels and Jack Sears as Nos. 1 and 2 on the depth chart this fall to not having them on the roster entirely, it’s that projecting quarterback depth charts that far out can be dangerous.

There’s also a future reality to face here, and it has plenty to do with those double quarterback signings of past years. In both cases, one quarterback became a multiple-year starter and the other quarterback elected to transfer. At this point, it’s almost expected for quarterbacks to transfer at some point during their college careers. The last three No. 1 overall selections in the NFL Draft all transferred and all won the Heisman Trophy at their ultimate destination. There can’t be concern about potential transfers at this position on the recruiting trail. It has to be about bringing in the best talent, making the right choice, and letting that scenario play out. USC simply had to go out and find the two best options at quarterback in this class, and that’s exactly what Clay Helton, Graham Harrell and company did.

USC now holds commitments from six of the top-20 prospects in the state, and two quarterbacks who will be major assets for the Trojans in recruiting other prospects. USC coaches have talked at length about “Taking Back the West” and locking down the Southern California region when it comes to recruiting. Grabbing commitments from the top two local quarterbacks in a year where that seemed to be an absolute necessity is a strong statement from this staff.