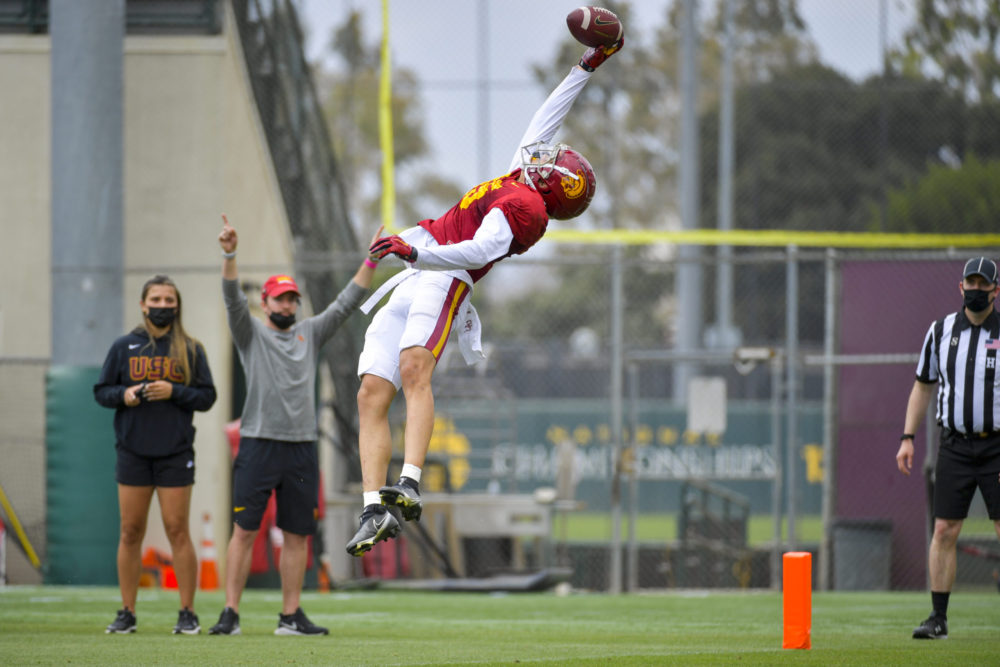 Two Trojans were named to the Biletnikoff Award watch list, a glimpse of the players considered the best FBS receivers in the country. Drake London and Tahj Washington got the nod from the USC roster. Both are deserving picks who have been very productive over their two-year college careers and could be in line for big 2021 seasons.

London was a star in 2020 and began that run late in 2019 as well, putting together a terrific true freshman season. In 14 games, London has 72 receptions for 1,069 yards and eight touchdowns. He spent the past two years playing alongside top targets in Michael Pittman, Amon-Ra St. Brown and Tyler Vaughns. This season, London is expected to step into a starring role, serving as the top receiving option for the Trojans and likely the best receiver in the Pac-12.

USC coaches are looking to utilize London as an inside and outside receiver, giving quarterback Kedon Slovis a variety of ways to get London involved in the offense. At 6-foot-5, 210-pounds and very difficult to bring down after the catch, London is a tough matchup for any defender who draws him. He had a handful of standout plays last season, but two that come to mind quickly are the game-winning, fourth-down catch to beat Arizona State in the season opener, and the 65-yard catch-and-run touchdown against UCLA where he seemingly broke double-digit tackle attempts from Bruin defenders.

Washington will be a new name to USC fans this season. The 5-foot-11, 175-pound speedster transferred this offseason to USC from Memphis, where he caught 43 passes for 743 yards and scored seven touchdowns last season. He’s very good after the catch and will inject a speed element the Trojans didn’t have much of in their returning group of receivers.

The wide receiver position is an interesting one for the Trojans. There is a ton of talent in the room, but London is the only one who has consistently proven anything while wearing a USC uniform. Bru McCoy and Gary Bryant Jr. had effective seasons last year and both are expected to take big steps forward this fall. McCoy has fought injuries during his time at USC, but is as talented as anybody on the roster when healthy. Bryant saw a bit of time as a true freshman last year, catching seven passes for 51 yards and returning eight kickoffs.

This is a position where there will be spots up for grabs this fall. London, Washington, McCoy and Bryant could wind up being the top four, but John Jackson III and Kyle Ford are turning into veterans looking to make impacts. USC brought in wide receiver K.D. Nixon from Colorado in the offseason, and signed three receivers in the 2021 class, in Michael Jackson III, Kyron Ware-Hudson and Joseph Manjack IV. Jackson was one of the spring standouts and it doesn’t look like he’ll need a redshirt year in order to make an impact at this level. Jake Smith will also be added to the wide receiver room this fall, after the former Texas standout elected to transfer to USC.

USC’s lone Biletnikoff Award winner was Marqise Lee in 2012. Alabama receivers have won the award three times since 2014, including two of the past three years. Any player who catches a pass is eligible for the Biletnikoff Award, meaning it could go to a tight end or running back if their performance warrants it.