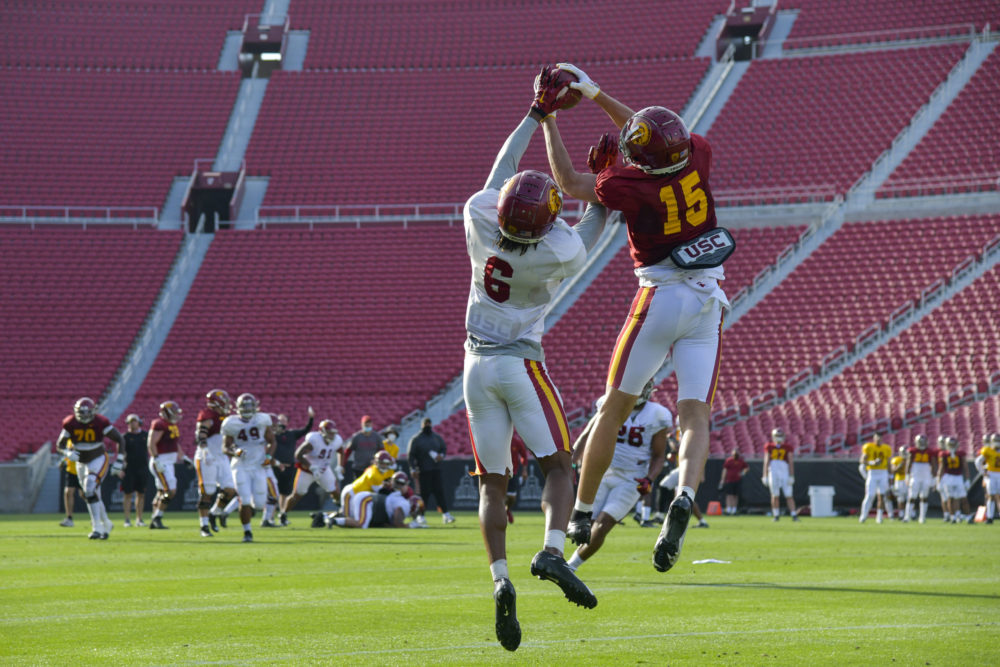 USC tight ends coach Seth Doege was a true freshman at Texas Tech in 2008, sitting out the season during his redshirt year. As such, he had a pretty good view of one of college football’s all-time receivers. Michael Crabtree put on a show in his two playing seasons for the Red Raiders. Crabtree was the first-ever two-time winner of the Biletnikoff Award and a two-time unanimous All-American, with 231 receptions for 3,127 yards and 41 touchdowns in just two seasons.

Drake London is listed as four inches taller and five pounds lighter than Crabtree, so the physical comparison isn’t one that would likely be seen right away, but Doege said he has flashbacks to Crabtree when he watches London on the field for the Trojans.

Doege said he tells offensive coordinator Graham Harrell constantly that London reminds him of the guy who caught one of the biggest passes in Texas Tech history, thrown by Harrell to beat No. 1-ranked Texas in 2008. On that play, Crabtree ran down the sideline and caught a back-shoulder throw from Harrell, then was able to stay in bounds against two defenders to score the touchdown. The abilities to make an adjustment on the ball, shield it from a defender and muscle through a would-be tackler are the things that come flooding back when Doege watches London play outside receiver this spring.

“It kind of correlates because both of them were really good basketball players, so they have extremely good body control,” Doege said, adding that slants and fades are the two most important routes this offense asks of outside receivers. “Especially out there, we want to be really good at slants and fades, especially versus man coverage. And it’s really hard to guard Drake London when he’s outside running a slant or fade right now. I remember that was Crabtree’s deal, too. You couldn’t guard him on a slant. You couldn’t guard him on a fade. They weren’t burners. Neither one of them are extremely fast players, but they are big, physical, very competitive with extremely good body control and body-positioning players.”

If London is capable of having that much success on the outside in this system, it raises the very interesting question of how the Trojans use him this season. London has obviously had plenty of success as the Y receiver in his career, lining up inside as a tight end hybrid. If he moves outside full-time, how does that affect the rest of the offense?

“I think it depends on what we’re trying to do, how we’re trying to attack the defense and where we feel like our best matchups are,” Doege said, adding that getting Bru McCoy back on the field this week and the continued maturation of Gary Bryant Jr. outside give USC more weapons to work with out there. “You don’t want to take a good player off the field either, but we have to figure out where we can manipulate and create some mismatches for Drake.”

That might be inside, where London has been one of the Pac-12’s most dangerous offensive threats for two seasons. And it might be outside, where the comparisons are obviously lofty. Doege could have something to say about that. Developing the tight ends to fill that Y receiver spot with a real weapon would make it much easier to move London outside, potentially get him matched up on a smaller cornerback and break some tendencies that defenses might be expecting from USC this season.

“You gotta be smart when you move him around,” Doege said. “But as long as you feel like you have a really good player at the Y position and we can find a mismatch on the outside, then let’s go expose that as well.”