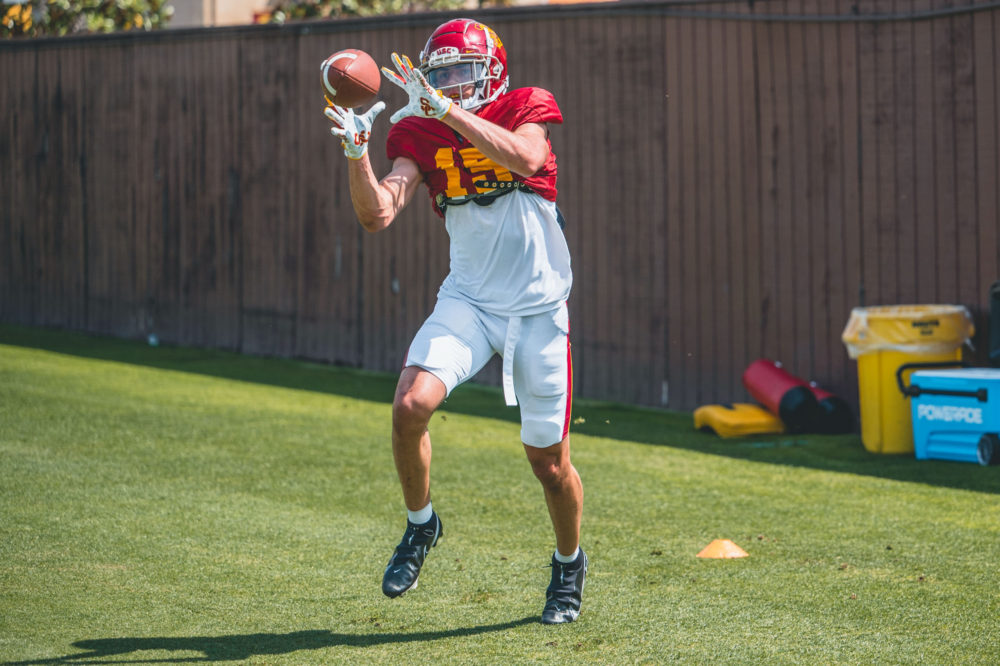 With Amon-Ra St. Brown and Tyler Vaughns NFL-bound, a new era has dawned for the Trojan receiving corps and Drake London is the clear-cut leader.

“Obviously we lost a lot of production losing Amon-Ra [St. Brown] and Tyler Vaughns,” wide receivers coach Keary Colbert said this week. “They’ve been players here for a while for us and you know obviously Drake is back and leading the group and we’re excited about that and we’re excited about the other guys in the room that are ready for this opportunity. There’s a lot of guys that are competing for some spots.”

London returns with by far the most experience among USC receivers. Bru McCoy and Gary Bryant Jr. saw the field more and more as last season progressed and the only other three scholarships receivers fully cleared for spring ball are transfer K.D. Nixon, John Jackson III and true freshman Michael Jackson III. USC hopes Kyle Ford is fully healthy and ready to play this fall, but he won’t participate in contact this spring. USC will also add true freshmen Kyron Ware-Hudson and Joseph Manjack IV in the fall, along with Memphis transfer Tahj Washington.

“It’s their room now,” Colbert said of the current crop of receivers. “It definitely is different without those guys there…Our room is like a family and I think we’re closer than we’ve ever been.”

Colbert has been pleased with the overall performance this spring, but he doesn’t let them off the hook easy as he expects continued excellence.

“Obviously there’s a standard in the room that’s very high and I think the guys are up to the challenge and upholding the standard and raising the bar, honestly,” Colbert exclaimed.

Colbert wasted no time in making it clear that these receivers are led by London, who heads into his junior season with 72 receptions for 1,069 yards and eight touchdowns in two years. Colbert praised London’s bright future with talk of how his body is changing and that London is primed to continue dominating at the position on his way to becoming a force in football.

Another key point Colbert mentioned about London was that it’s the first time he’s had a true offseason. London began his Trojan career as a multi-sport athlete, playing on both the USC football team and the men’s basketball team.

Playing basketball took away his first true offseason, while the second was ravaged by COVID-19. This makes 2021’s edition of spring ball all the more exciting for London.

“It’s been great just to focus solely on one sport,” London said. “Just going out there competing with the guys day in and day out; it definitely has helped me and it’s definitely been fun.

“It’s like night and day.” London said of the difference between previous offseasons and this one, adding that he’s been getting far more reps in.

After playing the inside receiver role thus far in his career, Colbert wants to give London some experience outside as well. Colbert said they feel he’s good enough to play both and to have no weaknesses in his game.

London had some great moments last season, but he shone brightest against UCLA with 97 yards, two touchdowns including a 65-yard touchdown that saw him bulldoze through the majority of the Bruins defense. Improvements in his game along with more leadership should give defenses nightmares for the entire upcoming season.

London said he’ll look to implement things he learned from St. Brown and Vaughns over the past few years. Namely, he wants to emulate how they practiced, how they carried themselves off the field, led by example and did all the little things the right way.

He’ll also get a boost from Colbert, whom London describes as “real.”

London is clearly one of the overall leaders of this team, but there’s a whole lot more to look forward to according to Colbert.

Colbert himself was known in the NFL as a tough receiver after a stellar stretch as a rookie with the Carolina Panthers in 2004. That’s why his continual praise of this group’s toughness is something worth noting.

When asked about Gary Bryant Jr., Colbert discussed how confident he is beginning to look within the offense. Colbert also added that K.D. Nixon adds a lot of veteran experience to the team as he comes over to USC from the University of Colorado. He even went so far as to call him a pro.

One of the most talked about rookies has been Michael Jackson III, and not just because of his name.

“Everybody made some plays this past week,” Colbert said. “Michael Jackson is the young guy that’s new…I thought he had a really good week.”

Colbert mentioned that Jackson is generally always studying or working out, making a point to highlight Jackson’s offseason conditioning. Colbert said he was, “excited about the opportunity to help him grow as a player and grow as a young man… I’m excited for what he’ going to do in his career.”

When asked about spring ball overall, Colbert said, “Spring ball is really for practice and just trying out new things.”

With London leading the way for this group of receivers, it seems as though these new things could prove dangerous for the rest of the Pac-12 and the NCAA.

Skyler Trepel is currently pursuing his Master’s in Sports Journalism at USC, where he is a sports anchor for ATVN, reporter, NBA columnist and podcast host, producer and editor for Annenberg Media. Skyler is also a writer for LakeShow Life, Host of the interview-style Mamba Moments podcast on the Bleav Network and co-host of the Shooting Bricks podcast, along with multiple guest appearances. As a lifelong sports fanatic and experienced multimedia journalist Skyler has a passion for the excitement, inspiration, and perseverance of the human spirits through interviews and storytelling within the realm of sport.