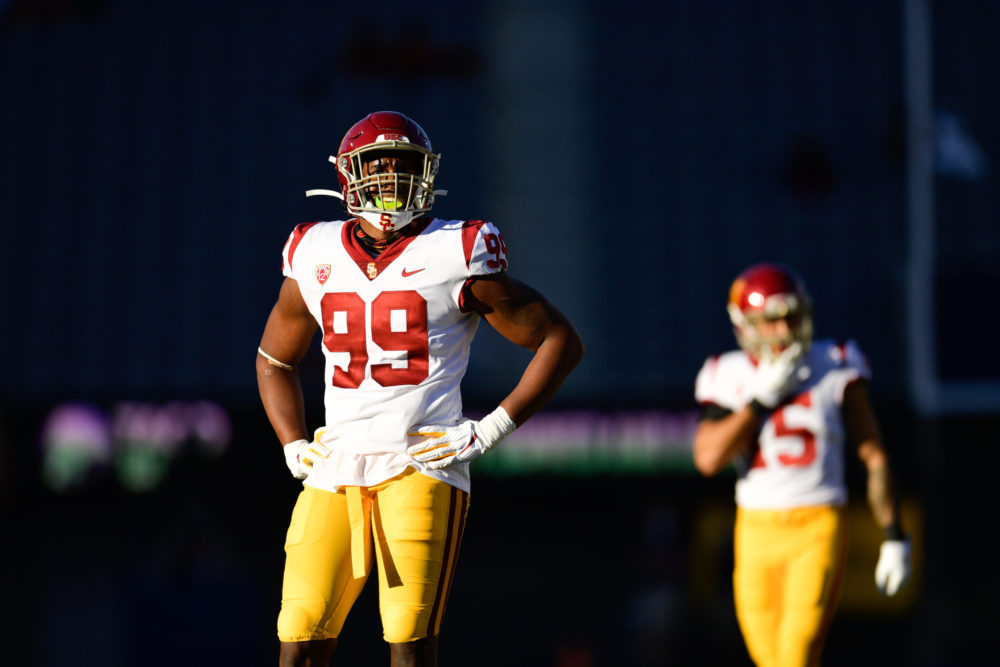 Expectations for USC’s Drake Jackson were through the roof heading into this season, after he led the team with 5.5 sacks and 11.5 tackles for loss on his way to being named a second-team All-Pac 12 player as a true freshman last year.

There was intrigue this past spring when it was revealed that Jackson would be moving from defensive end to outside linebacker, as he would fit in as the B backer in new defensive coordinator Todd Orlando’s scheme. Jackson lost around 20 or 30 pounds in making the move and showed up to fall camp noticeably lighter.

Questions began popping up about his use following the Arizona State game, as Jackson had just three tackles and didn’t seem to be a major factor in the defense, save for USC’s final defensive play when he got pressure on Sun Devils quarterback Jayden Daniels to force an incompletion.

But Jackson seemingly responded to those concerns in this recent game against Arizona, as he tallied five tackles and two sacks, despite missing a large chunk of the game as he received an IV. It would seem impossible to feel both twitchy and comfortable at the same time, but that’s where Jackson is right now.

On Wednesday, Jackson said the much bigger difference from last year is his body, rather than the new system.

“My role in this defense hasn’t really changed as much,” Jackson said. “I would say they just let me play more rather than thinking about anything. I like that a lot more, just having me play free and letting me do what I do.”

Jackson has three tackles for loss in two games, plus the two sacks and looks like he might top his freshman totals despite playing in far fewer games this season. He tipped his cap a bit to his physical transformation helping his pass rush.

“Just the quickness aspect is just about it,” Jackson said. “That’s the only thing I really see is feeling a lot quicker off the edge, just a lot more twitchy.”

Jackson said he worked bit more on dropping into coverage over the offseason, but it wasn’t a huge change from what he would have been working on anyway. Against Arizona, Jackson was consistently set after the quarterback, which was expected after Orlando said last week they needed to be careful in what they asked Jackson to do. That was taken to mean that pulling Jackson away from his pass rushing ability — maybe the best asset of any defensive player on the USC roster — wasn’t something they were looking to do too often.

Orlando was clear this fall that he thought Jackson was playing at much too high a weight last fall. Orlando agreed that Jackson’s quick twitch ability has been the biggest improvement this fall, but that Jackson was always going to stand out due to an unteachable advantage.

“To me, he’s got really, really good vision and that’s probably the thing that good players have that’s really non-coachable,” Orlando said. “He can see everything and he can adjust.”

While the stat sheet felt different with the two sacks compared to none the first game, Jackson said there wasn’t much difference in the two games. He praised Daniels for getting rid of the ball quickly and said that’s just how it goes sometimes when you look at sack totals.

“I would say it’s just a matter of me getting to the quarterback, because sometimes you get there and they just throw it away,” Jackson said. “But this week I was getting home.”

USC doesn’t know what quarterback its going to face this weekend at Utah, and the Utes are going to likely try to focus on a running game against the Trojans. But it was in last year’s Utah game that Jackson had his coming out party, as he registered eight tackles and a very important safety in helping lead USC to an upset win over the Utes.

Defensive linemen Marlon Tuipulotu and Nick Figueroa have shown an ability to get to the quarterback this season, but USC has to have production in that area from Jackson, as a dominant rush off the edge can completely alter an offense’s game plan. Last Saturday provided a look at what he’s capable of bringing to the field this season as he and his teammates continue to acclimate themselves to this Orlando defensive scheme.