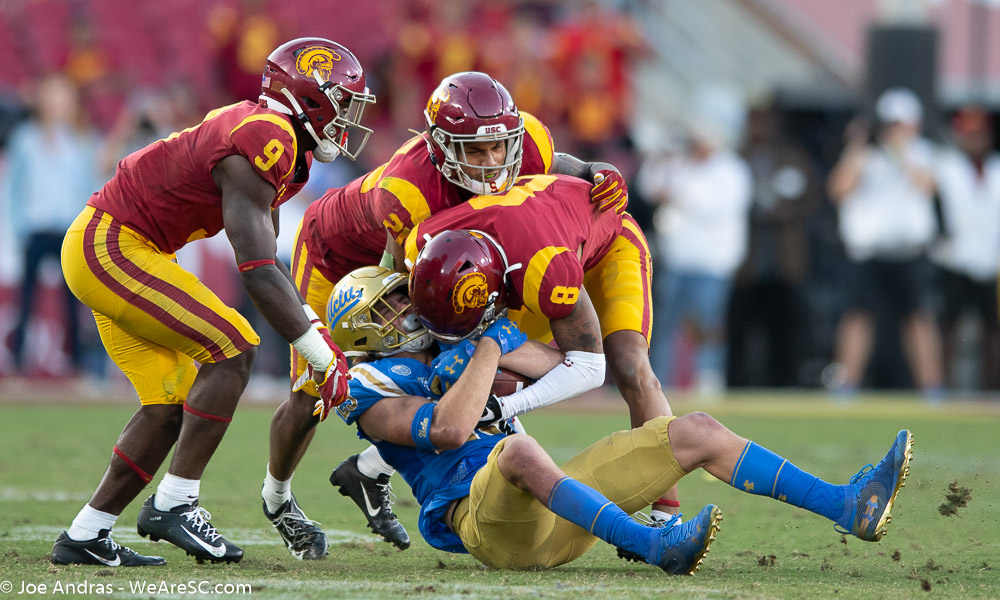 New USC cornerbacks coach Donte Williams joined Trojans Live on Monday night and spoke on a range of topics, including what makes him such a strong recruiter and his impressions of the new USC defensive staff and his group of cornerbacks.

On his connection to Los Angeles

On his start in coaching

“I went out there one day to LA Harbor College and luckily they gave me the opportunity. I realized as a player, I was extremely selfish. I didn’t know that, but it was all about me, me, me. And I started falling in love with coaching because in coaching you start realizing helping other people achieve their goals.”

On recruiting players to USC

On what makes him such a talented recruiter

“The biggest thing is, can you relate? Back in the day, it was all about one thing then, and what it is now. But at the same time these kids change every year. These parents change every year. You have to be able to relate. You have to be quick on your toes. You have to love this. You have to love this just as much as you do coaching. It’s almost being available 24/7. You can say I have one son, but all of a sudden if I’m recruiting and the guys already on the team, all those are my sons, too. And you have to look at it that way. You have to be fair and not treat anyone differently. And I think the things that have helped me the most recruiting, are my past players. And once you get guys who have been walk-ons with me, or guys who have been the starters, I treat everyone the same. There are no favorites. It’s not, because you’re the starter I spend two more hours working with you, or whatever the case. Everyone is the same and everyone has an opportunity to play. I don’t care how good you are. If you’re not doing things that we ask of you, you’re not going to play. That pretty much has been my motto always. Every guy is going to get the same treatment.”

On his Oregon defenders creating so many turnovers

“I hate to say it like this, but players, usually, follow the way that their position coach is. If you do something and you make a play, but you make a play the wrong way, some guys still cheer. If you look at me, if a guy makes a play but he makes it the wrong way, I don’t care. It’s not time to celebrate, because I know somebody in that [coaching] box or the next team we play, they’re going to pick on that. So I’m all about the correction. Good is never good enough for me. Great is never great enough for me. So no matter what, I don’t care, you could have had 100 plays today and if 99 of them were great, I’m focused on that play that wasn’t. And how can we fix that? How can I continuously get you better in everything? Whether it’s academics, whether it’s football, whether it’s life, this has to be bigger than football for all of us. Football is what brings us together, but it has to be something else that keeps us together and keeps us strong. Because there are going to be times when the guys in my group hate me, and I’m fine with that. But at the end of the day, they’re going to walk off that field still loving me because they know I want the best from them.”

“I’m not going to lie, I love it. Because it’s contagious, it’s the energy. When you talk about Todd Orlando—TO—the energy is always. You may come in there at 7 am  and think he’s going to die down around 10, but at 10 he’s just now getting going. He’s already hit the second gear. It’s the same thing at 2 in the afternoon. It’s the same thing just now, before I walked over here I passed by him at 5:50, he’s the same exact guy he was at 7:30. And it’s been like that every day since I’ve been here. And that’s everybody in the defensive room. The kids feed off of it. We get along great as a staff, and that’s only going to help our players bond with us and bond with each other. And it’s going to carry onto the field, because like I say, you never want to let the man next to you down.”

On his cornerback group at USC

“Some of them I knew through recruiting. One guy broke my heart multiple times, but that’s still my guy. I’m not going to mention any names…Chris [Steele]. That group is very talented, right? They’re still fairly young, so a lot of things that I’m asking of them technically, you have to continuously do it, because especially nowadays in football you want to get the same result. So it’s like, how can I keep getting the same result out of you without making it boring and doing the same exact drill? So you have go to step A through Z with these guys, because they don’t know what they don’t know. Last year, the things that were asked of them, to be honest, I’m not asking those things of them. I would like for it to be detail oriented, for them to be able to get up in front of the room to be able to explain it and teach it to me. There’s no room for error, especially when you play that position. Whether it’s a pass interference, or if you’re not at your best on the last play of the game, then we have issues. So, it’s getting them to perform.”

On going against this group of USC wide receivers

“If you guys see our group of receivers, they look like a whole group of power forwards and centers. It’s a whole bunch of freaks of nature. I think that helps our guys a lot, because you aren’t going to see better than that. That’s the best receiver group in the country and every day we get an opportunity to go against that. It’s only going to make us better.”