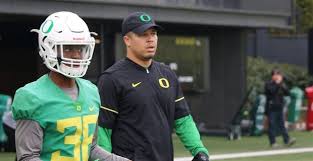 Oregon defensive back coach and ace recruiter Donte Williams is expected to be announced as the Trojans new cornerbacks coach and passing game coordinator, according to Bruce Feldman of The Athletic, along with other multiple sources.

The hiring of Williams, who has SoCal roots having played his prep ball at Culver City High where he was a three-time All-Bay League selection, is considered a Trojans major hire, as he is considered one of the elite recruiters in the country and arguably the best in the Pac-12 conference. Oregon finished first in Pac-12 Class of 2020 recruiting. Of note, Williams was the lead recruiter for prep All-America linebacker Justin Flowe, highly-touted receiver Kris Hutson, and was also credited with for landing five-star cornerback Dontae Manning.

Donte Williams joined the Ducks in January 2018 as the cornerbacks coach on Mario Cristobal’s staff.

(UPDATED) One of Williams main reasons for making the move from Oregon to USC was due to family considerations. In a social media explanation, he wrote, “But due to my father’s aging/failing health, I’m lucky Coach Helton and Mr. Bohn are giving me an opportunity to come home and make a decision where I can put my immediate family first and become head of MY household. With that all being said, it’s time to take back THE WEST. FIGHT ON”

Williams has spent coaching time at Nebraska, Arizona, and San Jose State, where he began his coaching career at the D-1 level. For his recruiting work at San Jose State in 2015, Sports Illustrated named Williams a top 10 recruiter in college football. He was also named the top recruiter in the Mountain West Conference in 2014 by 247Sports.

He started his career as the secondary coach at Los Angeles Harbor College before working in the same position at El Camino College (2008) and Mount San Antonio College (2009). Williams spent the 2010 season as a quality control coach at Nevada assisting with linebackers.

Williams graduated from Idaho State in 2006 where he served as defensive team captain.

The Trojans are still looking into filling the defensive line coach position, the lone position void to be filled, but that announcement could also be eminent.