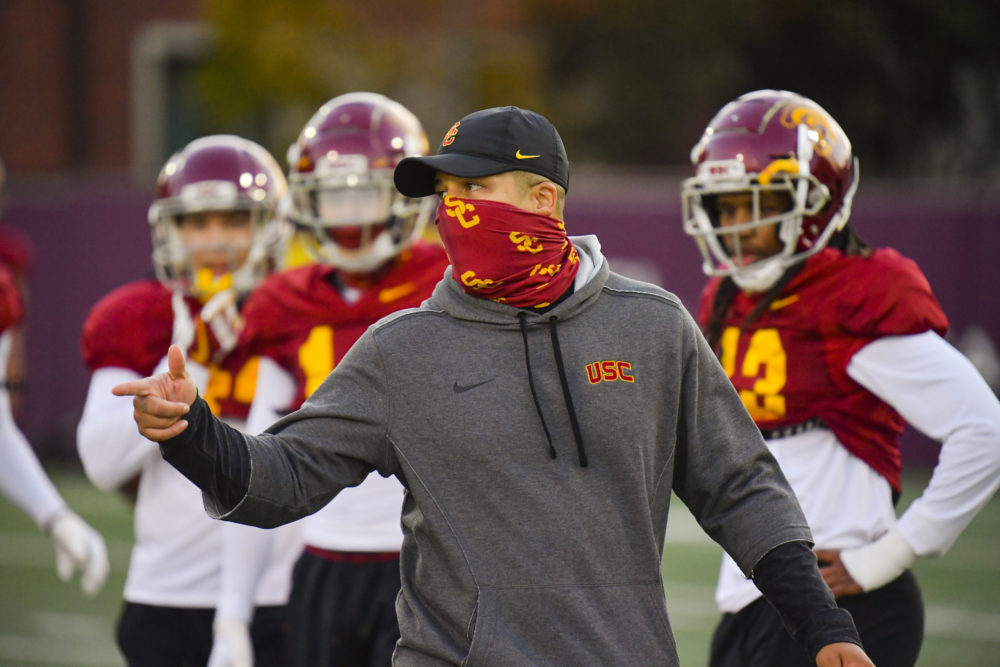 USC’s thinnest position this spring has been the cornerbacks. Returning starter Chris Steele and reserve Dorian Hewett have only recently been able to join full-pad practices and reserve Adonis Otey suffered an injury early in camp and has missed time. Even with Steele and Hewett back now, USC has just five scholarship cornerbacks this spring, but position coach Donte Williams has seen that as a positive.

“We were pretty thin for quite a few practices and guys were able to play a lot of reps and they were able to rotate,” Williams said, offering praise to USC’s new strength and conditioning staff for getting the players prepared to take on that challenge. “I’m really pleased with where my group is headed, for numerous different reasons.”

Williams said he’s pleased with the number of plays the cornerbacks are making on the ball. There have been a number of interceptions from the cornerbacks this spring, and they’ve come as a result of terrific athletic plays as well as great reads of the quarterbacks and understanding of positioning.

Steele had one of those impressive interceptions, which finished off Tuesday’s practice and came in the endzone after one-on-one coverage against Drake London. Though Steele is a virtual guarantee to start at cornerback this season, Williams slowed things down when asked to assess the “other” cornerback spot.

“Competition to me is daily,” Williams said. “You say, ‘the other cornerback spot,’ there’s always at least two. That’s just how it’s going to be. That’s how guys like Chris continue to perform, because the guys behind them are continuing to make plays. It’s not, who do I see as the other cornerback spot. It’s to make sure that we always have the two best players to help us win games, on the field at a time. So that’s what we’ll continue to make sure we assess, and make sure we put the best guys on the field going forward.”

Steele has been impressive in his return, and got his hands on a few passes on Tuesday, notching the one interception. The knock on him during his USC career has been his tendency to draw penalties with his physical play. Williams said that’s been a key point of growth for Steele this offseason.

“Athletically, Chris is up there,” Williams said of Steele’s ability to test well in things like the 40, the bench press and the vertical jump. “More for him is the mental aspects…Just making sure that he plays a lot better with his feet than his hands, because he’s physically strong, physically gifted.”

As for Isaac Taylor-Stuart, who has been a consistent presence with the first-team defense this spring, Williams said it’s about consistency, as it always has with the athletic Taylor-Stuart.

“He’s one of the guys I feel is taking the next step every single day,” Williams said. “Every day he’s getting half a percent better. He’s starting to make plays on the ball. He has some things that are going to help him, especially when it comes to his vision after spring football. He’s just making sure he pays attention to the details. It’s the little things for him. Whether at times he gets a little lazy with his technical aspect, or at times he plays too high, at times his feet cross over. The biggest thing for him is consistency. When it’s consistent, like everybody saw when he was in high school like at The Opening, he has all the attributes that you would want at that position. But it’s the consistent basis that kind of throws him off a little bit. Two plays that are really, really great – that’s not good enough. It has to be for a whole game. So that’s where we’re working at right now with him.”

With Steele out early on, Jayden Williams took extended reps with the first team and he’s picked off passes in each of the past two practices. He looks as though he’s ready to take that next step.

“He’s making plays on the ball,” Williams said of Jayden Williams. “Definitely making plays on the ball and he’s worked his feet. His feet and his eyes are two things that Jayden knows can get him in trouble just because he is extremely aggressive and he plays just like Chris. He plays with a chip on his shoulder. So at times you’ve got to get him to get back into the technical aspect of the game and making sure that he’s playing mentally, not just physically, because the game is 90% mental, 10% physical. Sometimes him and Chris get caught up when they’re playing the game almost at 50/50. So it’s my job to make sure the game is slowed down and calmed down for them and they’re playing more with a level head and playing technically first and physically second.”

And one of the most interesting stories of USC’s spring ball is happening at cornerback, where Joshua Jackson Jr. has settled in and played really well after flipping over from wide receiver. That’s a move that Williams has had envisioned Jackson making for a while, as Williams offered Jackson a scholarship as a cornerback while he was at Oregon.

“I already had, I guess, my eye on him,” Williams said. “Once things opened up to where we had a spot open and he was open to the idea, then he finally took it and ran with it and he wanted to stay there.”

Williams said it’s been about making some changes for Jackson, but also keeping in mind what made him a talented wide receiver.

“Everybody naturally is always able to go forward. That’s just a natural movement, just walking, running, everything,” Williams said. “So for him, everything is flipped to go backwards. But pretty much after the first five yards, you’re no longer the DB anymore. You’re now a receiver when it comes to covering. Now it’s a little different when it comes to tackling. Tackling is a bit different than blocking. But one thing I will say about him that I didn’t know—I didn’t know if he would come up and hit someone. I didn’t know if he would come up and strike somebody. And he’s definitely shown that he’ll do that over these courses or practice, because for spring ball right now, a majority of our practices have been live, so he’s definitely shown a physicality that I didn’t know he had. But at the same time, everybody knows when the ball’s in the air, he’s a receiver and he’s definitely going to make plays on the ball. That’s one thing that I have really focused on with him is learning the technical aspects of how to be a DB, and taking the things that he already knows about offense and flipping them to make sure his brain is working defensively.”

The cornerback group will get its first public test of the spring this Saturday during USC’s spring game. The Trojans’ passing game will put plenty of pressure on this group and these cornerbacks will have an opportunity to make a statement with their play.