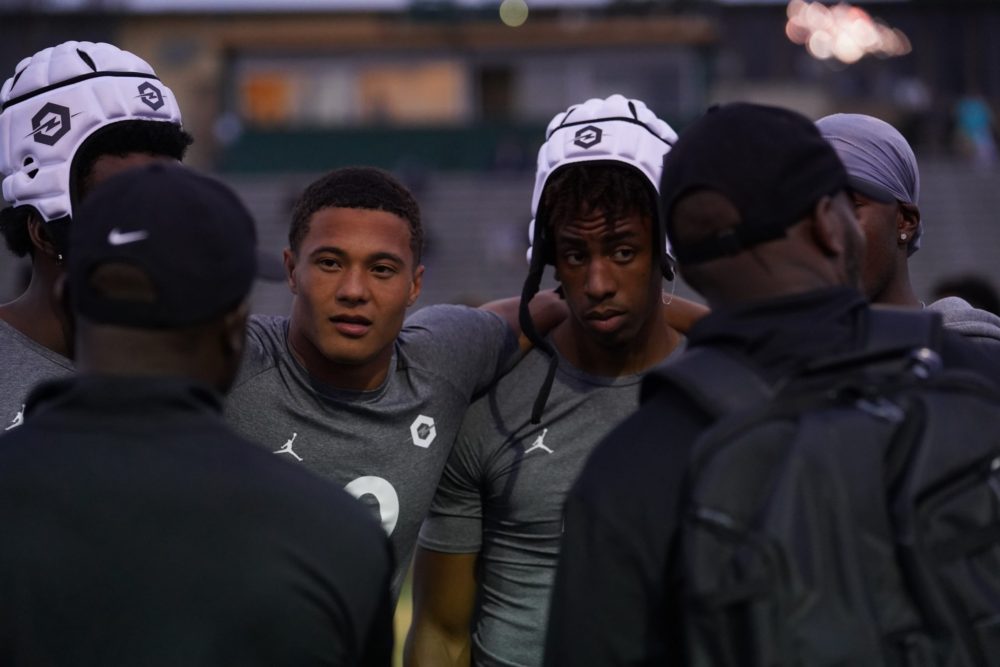 On the track or the recruiting trail, Domani Jackson (Santa Ana, Calif./Mater Dei) has been quick to do everything this year. The only five-star prospect in California this year, Jackson announced his commitment to USC back in January, much earlier in the cycle than is typical for many of the West region’s top prospects. In the 2021 class, five-star Korey Foreman and four-star Raesjon Davis elected to wait all the way until their respective signing days to announce for USC. Foreman actually signed during the earlier signing period and then waited another two weeks to announce on national TV. Davis did his on the traditional signing day.

Jackson’s commitment in January has allowed the nation’s No. 4 prospect to serve as a recruiting leader for the Trojans in this 2022 class.

“I had to be the big dog of the class and I have to bring the other big dogs with me,” Jackson said. “So that’s pretty much the main reason why I committed so early.”

Jackson has been a consistent recruiter for USC, and the Trojans are off to a very strong start on his defensive side of the ball. Fellow five-star, defensive lineman Mykel Williams (Columbus, Ga./Hardaway) joined the USC class in June. And Jackson leads the way for a phenomenal group of cornerbacks, with four-stars Jaeden Gould (Oradell, NJ/Bergen Catholic) and Fabian Ross (Las Vegas/Bishop Gorman) also committed.

As one of the best overall prospects in the nation and a guy with first-round talent at cornerback, Jackson had his pick of schools from across the country. And when a prospect is this talented, top programs aren’t going to back off even when a commitment is made. Alabama and head coach Nick Saban continue to pursue Jackson, and he took an unofficial visit to see the Crimson Tide in June.

“I’m always going to be solid with ‘SC,” Jackson said. “I think we have some great stuff coming in. ‘Bama is obviously Alabama, so I’m going to have to go look at it and stuff like that, but I’m fully locked in with USC.”

But Jackson didn’t just get it done quickly on the recruiting trail this year. In late-June, Jackson tied the California record in the 100m, at the state championships. Jackson ran a 10.25, a number his track coach suggested was possible but Jackson didn’t believe until he saw it.

“My coach always said I could be a 10.2 guy, but I didn’t believe him. You know how coaches just talk,” Jackson said. “I thought I’d just agree with him, so I was like, ‘Yeah, okay coach.'”

Jackson said a ton of work went into achieving that 10.25, including a “whole bunch of 150s with parachutes” and harness work.

“It was terrible,” Jackson said.

But the end result was terrific.

The Mater Dei team lost in the 4 X 100 relay that day, by .01 seconds to Mission Hills. Jackson said he took the blocks for the 100m finals with a bit of a chip on his shoulder.

“I had that energy built up,” Jackson said. “When I hit the blocks and heard the gun, I was ready to go.”

It was Jackson’s final run as a high school athlete. He’ll enroll early at USC and won’t be at Mater Dei for the spring track season. Now, he’s focused on leading the way for the rest of the USC class. He still has several more months to go until he can officially sign, and a bunch more recruiting pitches to give. He said his pitch to other prospects is a simple one.

Jackson showed just how great he could be while competing at The Opening late last week. The five-star cornerback teamed with four-star corner Bobby Taylor (Katy, Tex./Katy) and helped his team to the finals of the 7on7 championship. Jackson was rarely tested, showing how his reputation precedes him, even at events loaded with offensive talent. When he was thrown at, he was able to showcase his outstanding ability to read and react and then break on the ball with tremendous speed. The combination of that straight-line speed, anticipation in reading routes and quarterbacks and his 6-foot-1, 185-pound frame makes Jackson virtually a sure thing to excel at the next level and beyond