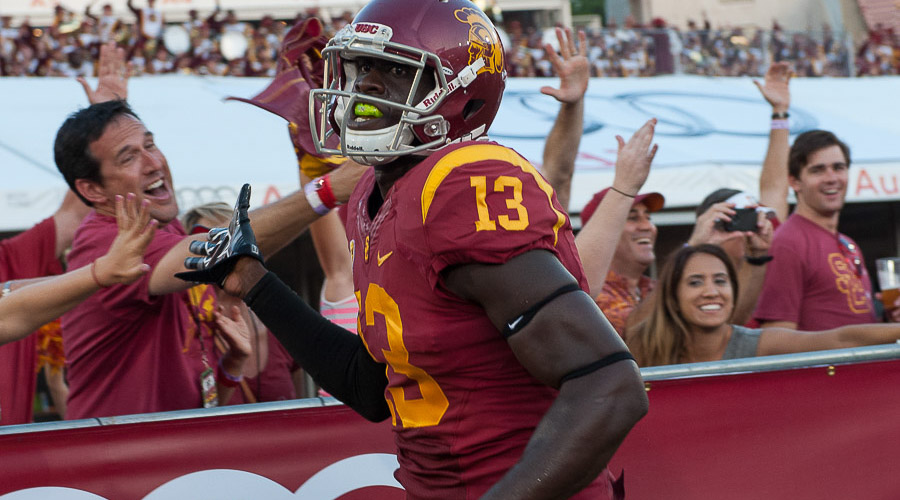 On August 24, 2015, former Trojan tight end Bryce Dixon brought an ex parte application (basically a same-day rush request) for an order to show cause re contempt against USC Vice Provost Ainsely Carry, which was denied the same day. While initially, before the court filings were accessible, this seemed like just a contempt proceeding to get reinstated, the filed documents appear to show that new measures have been put in place by USC after the expulsion was stayed.  What did Dixon claim made Carry in contempt, what did he want the court to do about it, and what was Carry’s response?

Dixon alleges that following the August 12, 2015 stay order by the court, USC refused to re-instate him as a student-athlete on his full four-year athletic scholarship, required he re-enroll at USC, withheld his Spring semester grades, and issued new sanctions including banning him from the football team.

Dixon alleges that on August 14, 2015, he notified USC of his intent to “hold Respondents in contempt” of the stay order. Following that, Dixon alleges USC released his grades and reinstated his scholarship, but still barred him from the football team.

Dixon states he “wants very much to play football for USC, but he was resigned to focus on classes this Fall and clearing his name of the false misconduct charges.”

Dixon claims that on August 20, 2015, Carry “authorized new sanctions” against Dixon including barring him from athletic training facilities and “taking away [his] access to paid meals by barring him from dining facilities within University residence halls, and banning any involvement Mr. Dixon might have had with organized football team functions.”

Dixon’s Request that Carry Be Imprisoned and Fined

Dixon’s Application requested that the Court find Carry guilty of contempt for allegedly disobeying its stay order and imposing new sanctions and restrictions on Dixon, and that upon a finding of contempt, that the court make orders to: (1) imprison Carry five days, (2) fine Carry $1,000, and (3) order Carry to pay Dixon reasonable attorneys’ fees in connection with the contempt proceeding.

Carry’s Opposition predictably characterized the August 12, 2015 stay order as “limited and directed only that ‘the sanction of expulsion…be stayed.’”

Carry’s opposition claims Respondents have fully complied with the August 12, 2015 order, in that Dixon’s expulsion has been stayed, he has been allowed to return to USC, and is “currently registered in classes.” Carry’s opposition also confirms that USC reinstated Dixon’s scholarship.

Carry also alleged that, while complying with the court ordered stay of expulsion, due to the sexual misconduct report and university “obligation to protect the victim, as well as other students,” it is University policy to permit “interim protective measures” “during the pendency of disciplinary proceedings.”

Carry thus states that, consistent with this policy, Dixon was allowed to return to school, but that he could “only attend the classes in which he is enrolled,” he could “only utilize University dining facilities that are not within University residence halls,” he is “not permitted to contact the victim,” he “is not permitted to access any athletic training facilities (i.e., those specifically provided for and solely used by student-athletes),” and he “is not permitted any involvement with organized football team functions.”

Carry stated that the above interim measures were “designed to protect the victim, who will be on campus in fall of 2015 and will be utilizing athletic training facilities, and the University’s other students.”

Carry also stated that, “because [Dixon] has not been reinstated to the football team, he is not permitted involvement with organized football team functions.”

Judge O’Brien issued a short order stating, “The ex parte application is denied,” meaning Dixon wasn’t given any of the relief he requested. No other orders were made.

Apart from the fact that the August 12, 2015 order seemed to be pretty limited in scope, judges in general do not like to grant ex parte applications unless good cause is shown, preferring that parties go through the regular statutory notice period for making motions/applications.

So What Does This All Mean From a Legal Perspective?

This just means that the judge didn’t find Carry in contempt of the August 12, 2015 order, which appears limited in scope to staying the expulsion.

The next scheduled hearing in the matter is the Trial Setting Conference, set for November 5, 2015.

Questions or comments, or any other legal topics in Trojan sports that you want to see covered? You can contact Lizelle via email to [email protected], or tweet her at @LizelleBrandt.