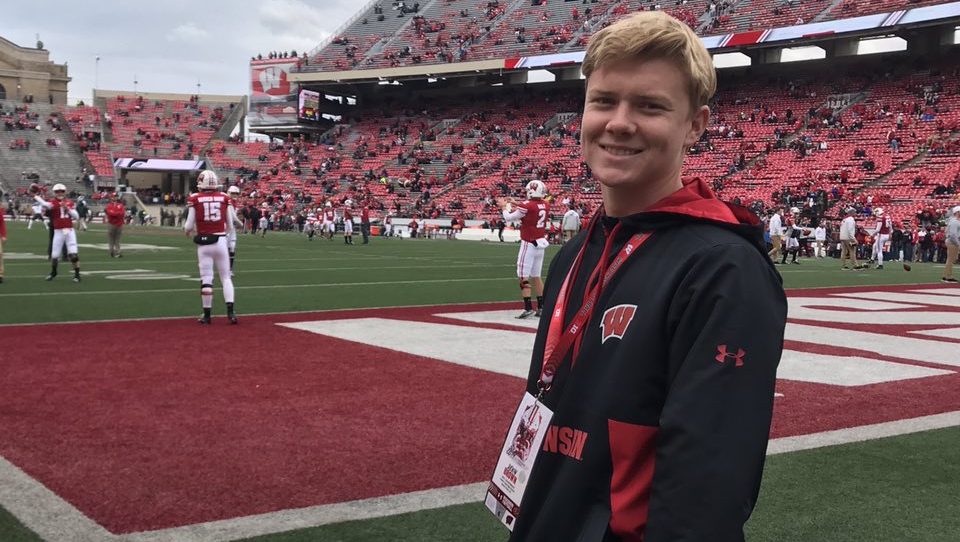 USC doesn’t often need to venture outside Southern California to find quarterback targets. Over the past two decades–and well beyond that–the list of USC starting quarterbacks is only occasionally dotted by those who came to Los Angeles from outside California. But the Trojans have a keeper right now in Arizona’s Kedon Slovis, and USC offensive coaches might be looking that state again for their 2022 signal caller, as Devin Brown (Queen Creek, Ariz./Queen Creek) added a recent offer from USC and is looking hard at the Trojans.

The 6-foot-2, 190-pound quarterback took over the starting job at Queen Creek last year after sitting out the first five games due to transfer rules, then threw for 1,319 yards and 10 touchdowns. He’ll need to cut down on the interceptions moving forward, but he had that gunslinger mentality and ability to bounce back from mistakes as a sophomore that his head coach, former Ohio State and NFL quarterback Joe Germaine, appreciated in a quarterback.

As for what USC likes about him, Brown said: “They like my athletic ability for sure. My offense is very unique. I still play under center and am taking seven-step drops, and that’s not something you see every day in high school football. It’s intriguing how much my offense can correlate to other offenses. They also like how I am as a person outside of school. They’ve talked to my counselors, my family, and they see how I represent myself.”

Brown has been in contact with USC coaches for several months, as he’s developed a solid relationship with offensive coordinator Graham Harrell and quality control coach Seth Doege. But things got more serious on September 1, the first day coaches could initiate contact with 2022 prospects.

Brown jumped on a Facetime call with Doege and Harrell and an offer was extended.

“I kind of figured it was coming at some point because of how close we got and how long we’ve been talking for,” Brown said of the USC offer. “But it was still very surprising and very exciting.”

Earlier this week, Brown was able to take part in a presentation from some of the USC offensive staff–notably Harrell, Doege and head coach Clay Helton–via Zoom video call.

“That was one of the few I’ve done,” Brown said. “It was a lot about how they develop players and USC’s great quarterback tradition. They were showing how you can go to their program and develop who you are.”

The quarterback tradition of the Trojans was no surprise to Brown.

“If you’re a quarterback and you don’t know the history of USC, I don’t think you’re that detailed of a quarterback,” Brown said. “I think every quarterback knows USC is a good place to go.”

Brown was very impressed with what Harrell was able to do with the USC offense last season and he’s well aware of the path Slovis took from Arizona to true freshman starter with the Trojans, posting top-10 single-season marks for passing yards and touchdowns in USC history. He’s followed Slovis’ career to this point and there is a fun coincidence, beyond just coming from a similar region of Arizona. Slovis is tied to Kurt Warner, the Super Bowl winning quarterback who served as Slovis’ high school offensive coordinator. Brown will be likely be tied to Germaine, who served as Warner’s backup for those Super Bowl-winning St. Louis Rams.

Arizona isn’t the hotbed of quarterback recruiting that Southern California is, but it’s not that far off. Oklahoma’s Spencer Rattler and Iowa State’s Brock Purdy are Arizona products starting in the Big 12. And more recently, Jack Miller was a big get for Ohio State in the 2020 class, Ty Thompson is one of the top quarterbacks in the 2021 class and headed to Oregon, and Nicco Marchiol is a coveted 2022 prospect.

Brown said he’s been able to speak with some of the Arizona quarterbacks who have gone out of state for college–not Slovis yet, though he’s hoping to speak to him at some point–and getting a sense of what their transition was like at each school has been helpful in navigating the process.

Brown earned offers from Arizona and Arizona State, as well as Iowa State, Michigan State, North Carolina State, Northwestern, USC and Wisconsin during his recruiting process, but said that since Sept. 1, he’s been able to get a much better sense of which schools are more seriously recruiting him. Brown said it’s been extremely helpful, since he wasn’t able to take unofficial visits over the summer.

“That was a factor that slowed a lot of people down. It slowed me down,” Brown said of not being able to see coaches in person. “But getting to be on the phone with coaches now has been really helpful. It’s a huge deal being able to talk to coaches and I think you could see a lot of guys start to commit. It’s narrowed things down for me because I see who is really pushing for me and who wants me as their guy. The schools that really want you, you can talk to them pretty much every day.”

At this point, Brown said he’s looking hard at Northwestern, USC and Wisconsin.

The Badgers are likely USC’s biggest competition here, as Brown visited the Madison campus last fall. His comfort level with Wisconsin will likely play a part in his decision, but the USC offense should keep the Trojans in the mix. USC attempted 514 passes last season compared to 351 for Wisconsin.

“Some schools throw more than others and that’s definitely a big thing,” Brown said.

But Wisconsin will also be able to pitch the offensive line they’re building in front of any potential future quarterbacks. In the 2019, 2020 and so far in the 2021 classes, Wisconsin has signed or holds commitments from seven 5 and 4-star offensive linemen, including two who are regarded as top-20 overall prospects in their class.

The combination of academics and athletics will be big for him.

“Education is a big deal for me, so that’s something that plays a big role,” Brown said. “And at the end of the day, I want to go to the NFL. It’s academics first, but I want to go where I can play and help a team, where I can fit in as a person and where I can thrive.”

Brown doesn’t have a strict timeline for a commitment, but said he thinks he’ll be able to make one “sooner than later.” His first game this season is scheduled for October 2, and he said there’s a chance he could be ready to announce before then.

USC has commitments from Miller Moss (Santa Ana, Calif./Mater Dei) and Jake Garcia (Valdosta, Ga./Valdosta) in the 2021 class, though Garcia is still a top target of Miami’s. It wouldn’t be completely out of line for the Trojans to take two quarterbacks in both the 2021 and 2022 classes. As the depth chart stands now, Matt Fink and Kedon Slovis are the only scholarship quarterbacks, and with Fink in his final year of eligibility and Slovis a potential early entrant into the 2022 NFL Draft, getting four scholarship quarterbacks onto the 2022 roster would necessitate two each in the next two classes or going the transfer route. It would certainly create something of a backlog and lead to a transfer or two, but after playing three quarterbacks in each of the past two seasons, it’s a position that needs some depth and options added to it.