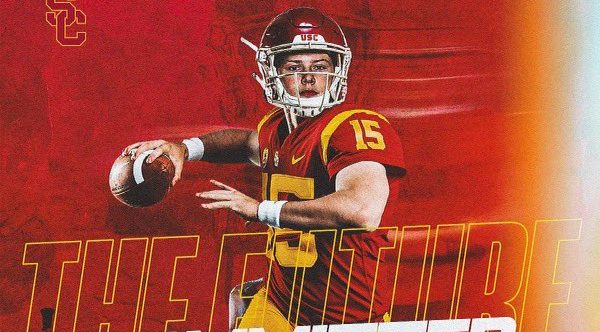 Brown said he felt a commitment coming on last week and the decision was cemented on Saturday. He hopped on a Facetime call with USC offensive coordinator Graham Harrell and quality control analyst Seth Doege. It was good timing, as it turned out, as USC head coach Clay Helton was at Harrell’s house, and was able to jump in on the call as well.

Brown said it was great that he got to announce his commitment to all three at once.

“My parents were in the room and they were cracking up laughing because all of them were screaming,” Brown said. “You should have heard coach Helton.

“They were so happy that I’m on board,” Brown continued. “They said this class starts with the quarterback. They want me to be the face of the class and the face of the program.”

Brown said the coaches told him he would be the only quarterback they take in the 2022 class. The quarterback depth chart has been very fluid over the past few years. The Trojans have just two scholarship quarterbacks right now and USC will likely lose Kedon Slovis following the 2021 season. USC holds commitments from two quarterbacks in the 2021 class–four-star prospects Miller Moss (Mission Hills, Calif./Alemany) and Jake Garcia (Valdosta, Ga./Valdosta).

“We’ve thought about that and talked about,” Brown said of he and his parents discussing a couple of talented quarterbacks getting a head start at potentially replacing Slovis. “They’ve shown with Kedon that it’s truly an open competition. The best player plays.”

Brown said USC coaches have told him they see similarities in he and Slovis, adding that the two played in nearly identical high school systems. Brown’s head coach is former Rams quarterback Joe Germaine, who served as the backup to Kurt Warner during the 1999 Super Bowl winning season. Warner was Slovis’ offensive coordinator in high school. Brown said he and Slovis have discussed how the offenses are very similar, in terms of play calls and concepts.

Brown held offers from Arizona, Arizona State, Northwestern, Wisconsin and others before ultimately settling on the offer from USC. Now that the decision is made and the recruiting process is over, Brown turns his attention to two important items–preparing for his junior season and helping USC build the best possible 2022 recruiting class.

He’ll begin his junior season at 6-foot-3, 185 pounds and just 16 years old (he turns 17 in October). And now, he’ll head into the season with plenty of extra outside pressure.

“There’s obviously a big target on my back being a USC quarterback commit, but now I have to focus going into the season,” Brown said. “It adds onto how people think of me and how they expect me to be, but it’s not going to affect me. I’m the same guy I’ve always been.”

While it’s rare that USC brings in a three-star quarterback–even Slovis was a four-star prospect according to ESPN’s rankings–Brown wasn’t able to take advantage of any evaluation periods or summer camps in order to impress coaches or recruiting analysts. Last year was his first year playing varsity football and he was forced to sit out the season’s first handful of games due to transfer rules.

“I think I’m a top guy,” Brown said of his ability compared to other quarterbacks. “But it’s not arrogance. It’s about having confidence, and that’s how you have to be as a quarterback.”

That confidence will extend to the recruiting trail for Brown, who is looking forward to getting started building a 2022 class for the Trojans that includes just one other prospect, four-star linebacker Niuafe Tuihalamaka (Mission Hills, Calif./Alemany).

“I have to have a really strong relationship with the guys who are going to be around me, so I have to start now in getting those guys,” Brown said.

He doesn’t yet have a complete idea of what USC’s recruiting board looks like–he plans to check in with the coaches soon to see who his main targets should be–but he’s already started doing research and looking up a few of the wide receivers the Trojans have offered. He said he expects Class of 2022 prospects to potentially make decisions and commitments earlier than their 2021 counterparts, as the unknowns of recruiting during Covid-19 are causing prospect to make commitments sooner because spots are filling up quicker.

Asked to break down what his recruiting pitch will sound like, Brown said he hasn’t organized any thoughts on that yet.

“I haven’t spoken to any players yet, but I’m just going to let them know, look at the history,” he said. “I don’t know if there’s a better fit to go put up stats and yards and throw it a bunch of times.”