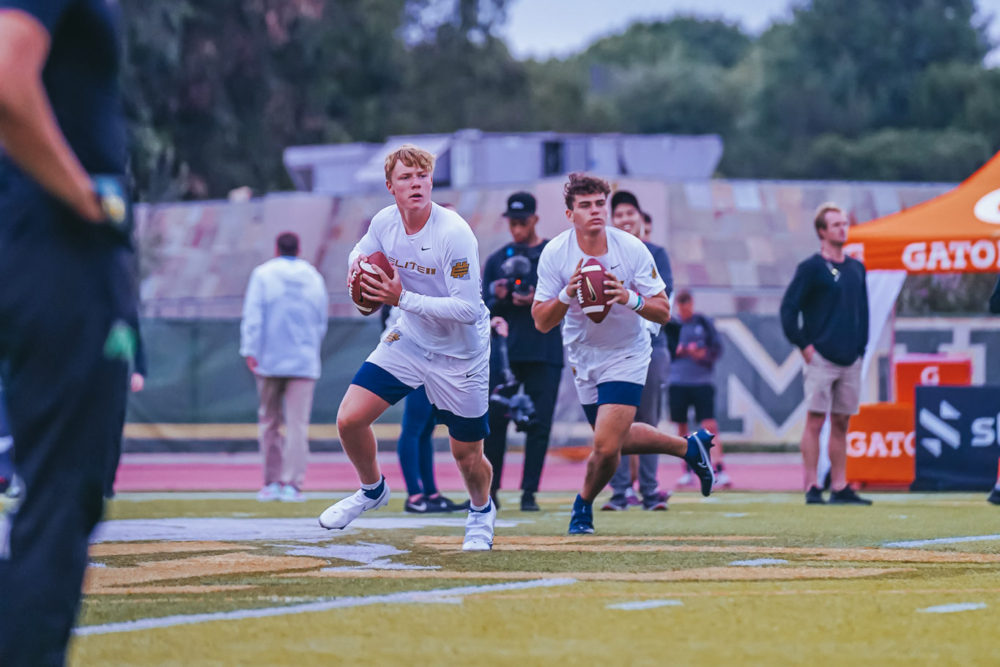 When quarterback Devin Brown committed to USC last September, he was a relatively little-known, three-star quarterback with offers from Michigan State, North Carolina State, Northwestern and Oregon State. After a nice junior season, he’s climbed the rankings since then and now sits as the No. 283 overall prospect and No. 22 quarterback. This week, Brown has an opportunity to show he belongs even higher up those lists, while he goes toe-to-toe with the nation’s top-ranked quarterbacks at the Elite 11.

Brown put together a very good performance on Night One of the Elite 11, Wednesday evening, and was mentioned as a top performer by just about every publication in attendance.

It’s not an easy group to crack, with the top four quarterbacks and eight of the top 10 quarterbacks in the nation in attendance. But Brown said that’s right in line with his goal for this week, which was to prove he belongs on this stage and with this group of talented quarterbacks.

“I thought I did really good today,” Brown said. “There were a couple high balls that hit the track (surrounding the field), but other than that, I thought I had a really good day.”

Brown said he started out with some nerves, but settled into things as the evening progressed. He called it a “super fun” night, participating in the prestigious event.

Brown and the other quarterbacks will continue to be put through the paces over the next three days, with the third day of the event taking place on Friday, then the quarterbacks participating in The Opening 7-on-7 event on Saturday.

As a junior at Queen Creek (Ariz.) High School last season, Brown threw for 1,761 yards and 18 touchdowns. It’s safe to expect those numbers to rise precipitously this fall. He made the move to Draper (Utah) Corner Canyon over the offseason and is looking to take over as the starting quarterback for the Chargers, filling the shoes of last year’s Gatorade Player of the Year and USC quarterback signee, Jaxson Dart.

Brown said the move was for family reasons and had nothing to do with following Dart, but it’s a happy coincidence for the Trojans, who will get a chance to see their quarterback of the future turned lose in that Corner Canyon offense, orchestrated by head coach Eric Kjar. Last year, Dart threw for 4,691 yards and 67 touchdowns against just four interceptions, and ran for 1,195 yards and 12 touchdowns on 128 carries. Brown has the same kind of throwing ability and should be able to post big numbers this fall.

“I know that offense is great and coach Kjar is an incredible coach,” Brown said. “There’s a lot of great guys around me, so I’m just super excited to be there this season.”

Brown said there are a lot of similarities between the Corner Canyon and USC offenses and that the USC coaches had positive reactions to his move. He said the wording is different, but a lot of the plays are the same.

“It was an awesome time,” Brown said. “I actually got to throw for coach Helton, coach Harrell and coach Doege. They were all out there, so it was super fun to be able to throw in front of them.”

That was Brown’s first time seeing the USC coaches in person, but he said he’d gotten to know them well virtually and they were exactly how he’d come to know them over phone calls and FaceTime chats.

“They’re pretty real about who they are,” Brown said of the USC coaches. “I’ve been talking to them for longer than a year, so it was just like family. We got in there and chopped everything up, so it was a really great time.”

Brown said the visit didn’t exactly firm things up for him in terms of his commitment because there was nothing to firm up.

“I was all the way in from the beginning, but going there, I know that’s where I want to be and I’m not going anywhere else,” he said.

Now, Brown will turn to recruiting players to join him in the 2022 class. He said fellow commits in tight end Keyan Burnett, wide receiver Kevin Green and cornerback Domani Jackson are on his list to connect with this week at The Opening. Also, uncommitted wide receivers Tetairoa McMillan and Nick Anderson are targets.