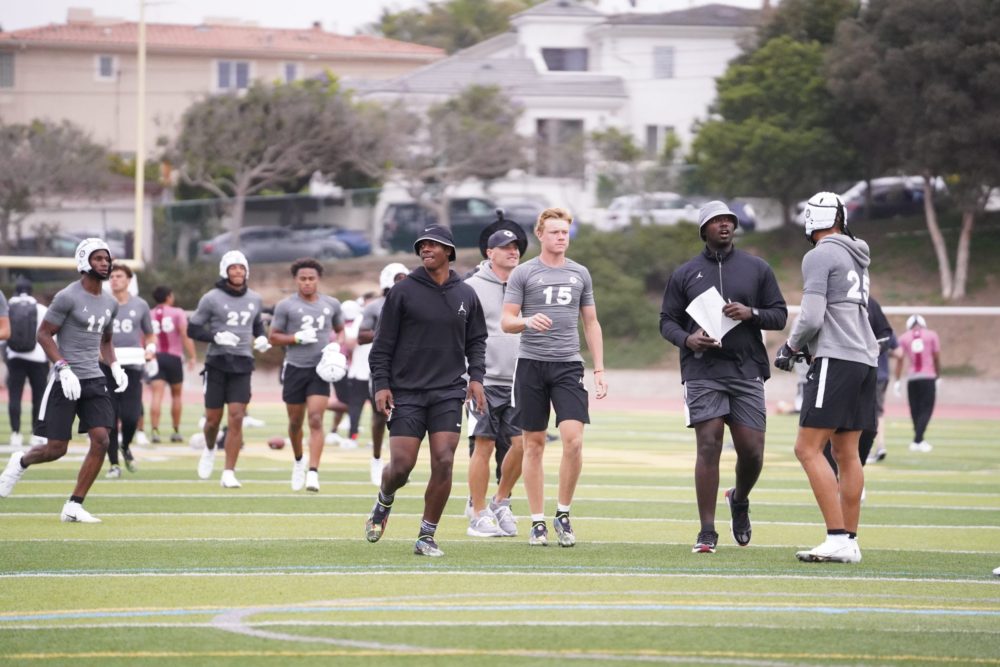 USC commit Devin Brown is the nation’s No. 283 overall prospect and No. 22 quarterback.

After four days of Elite 11 and The Opening competition, the 6-foot-3, 189-pound quarterback who will guide Draper (Utah) Corner Canyon this fall is certain to get a bump in those rankings whenever they are updated. The only question is how high he will rise.

Brown didn’t win MVP of the Elite 11 — that went to Clemson commit and five-star prospect Cade Klubnik (Austin, Tex./Westlake), who is another quarterback likely to see a bump from his spot at No. 64 overall — but he absolutely turned the most heads and opened the most eyes with his play. Of the 20 quarterbacks at the event, Brown came into the event as the No. 13 quarterback in the composite ranking. He finished fifth in the Pro Day event and tied for fourth in the target challenge. He entered the final day ranked fourth at the event and ultimately accomplished his goal of proving that he belonged on the same stage as guys like Quinn Ewers (Southlake, Tex./Southlake Carroll), Walker Howard (Lafayette, La./St. Thomas More), Ty Simpson (Martin, Tenn./Westview) and Conner Weigman (Cypress, Tex./Bridgeland), commits to Ohio State, LSU, Alabama and Texas A&M and the Nos. 1-4 quarterbacks in the country.

Former Texas A&M quarterback and current Indianapolis Colts offensive quality control coach Jerrod Johnson got an in-depth look at Brown, serving as the offensive coordinator and playcaller for his team.

Johnson said he was able to see Brown a bit when he performed well enough at the Elite 11 regional to earn an invite to the finals. But his showing over these four days lapped any expectations coming in.

“I’ve been blown away with him since he’s been here,” Johnson said. “He’s twitchy. His eyes are quick. He moves at a pace that is sudden. The ball kind of jumps out of his hands. And the hardest thing to do, as we try to put them through a simulated mini version of an NFL-type offense, is that decision making process and when to lock onto someone, when to turn it down and get to the next…I’ve been really impressed with how quick his eyes are and decision making, because it was all arm talent before this.”

Brown still has a senior high school season to keep improving, and while he’ll continue getting bigger and stronger, Johnson said the next steps for Brown will mostly be mental.

“He’s gotta keep learning defenses,” he said. “Right now a lot of this is natural. It’s reactionary. He knows open looks; he knows how to feel the game. You want to be intentional. Twitchy guys can get away with playing off reaction and feel, but a twitchy guy who can anticipate, that’s a whole other level. That’s his next thing as a 17-year-old is to start learning defenses. I know coach [Graham] Harrell and everybody will get him right at ‘SC, so he’s in a good spot.”

Brown is clearly on the right track and this performance is likely to spur him on as he tries to take over a program that went undefeated on its way to a state title last season.

“I think he’s sure of himself,” Johnson said. “I think he plays with a little chip on his shoulder. There’s an intensity there that’s good. I think all the guys have rallied around him because he’s rolling.”

And after getting a chance to spend time with him, Johnson understands why Brown is ascending so quickly.

“He asks the right questions,” Johnson said. “We try to push the kids, especially the quarterbacks, to keep asking, ‘why?’ Not just know what to do, but ask coaches why. Know why we’re doing everything, and he keeps throwing whys. I think that’s why he’s done so well is he really gets what we’re trying to do, a lot of that is because throughout the week, he asks a bunch of questions. He sought the information, got the information and he’s rolling.”