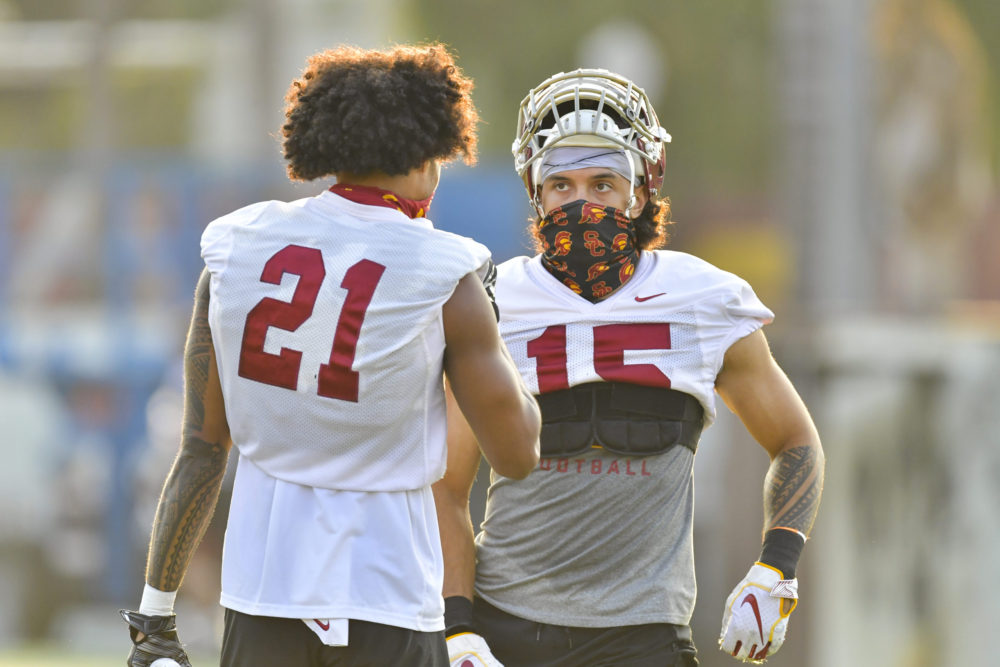 It hardly seemed like a great way to break in a new defensive scheme and coordinator — missing all but one practice of spring ball and not having physical access to players for months. But this off-season hasn’t been anything close to a worst-case scenario for defensive coordinator Todd Orlando, as he took over a USC defense looking to improve drastically from last year in all phases.

Orlando said that he actually got more teaching time with the players than he normally would, which allowed the defense to get the scheme installed off the field well enough that they could hit the ground running this fall.

“In actuality, we’ve had more time because you only get X amount of time in spring football and then we go on the road recruiting,” Orlando said, adding that the summer is filled with the camp circuit and then a month off in July. “So from actually teaching the defense, it’s actually been beneficial for us.”

Orlando said where the team was affected negatively was in the inability to apply it on the field.

“The thing that hurt was going in there and teaching practice habits and teaching the things that you need to defeat a block and to tackle somebody,” Orlando said. “That was probably the urgency when we first got the pads on, was we need to do this as much as humanly possible because this takes some time. We’re not going to try to figure out how to do this on Saturday.”

That made this season’s process of installing a new defense different than in any of his previous stops, but Orlando feels confident that they’ve been able to successfully play catch up with the physical aspect.

“We had to make up for it during that two week stretch of camp,” Orlando said. “My biggest thing was — give me a couple weeks to figure out who’s going to tap out when we do really hard stuff. That’s all I was looking for, to see when it got really hard, because to me, that measures a person. Not the easy stuff. Everybody’s great when they’re front-running. When it got difficult, which group were you concerned about? And there’s not a group that we’re concerned about. I love our approach.”

Orlando said the two-week ramp-up period before camp was hugely beneficial to getting the defense ready for a physical camp, and now the Trojans are just days away from taking their first real snaps of the 2020 season.

“I think we’re all very excited to get going. It’s been a long road,” Orlando said. “We had a stretch of time where we really challenged the guys in the physicality part and I think, my own personal opinion, they’ve done an outstanding job of embracing what we want to try to get accomplished and, like I said, a few days before the game, we’re ready to go.”

Orlando was asked to pick a group on his side of the ball that has stood out to him through fall camp and he went with the safeties, though he was clear that it wasn’t meant as a slight against any other position group.

“The group since I’ve gotten here that has been exceptional in terms of doing anything, whether it’s on the field, off the field, as been the safety unit,” Orlando said of a group that includes returning starters in Talanoa Hufanga and Isaiah Pola-Mao, as well as last year’s nickelbacks now. “I’ve been really impressed with that. But everybody has collectively gotten a little bit better throughout camp.”

Orlando has a few standouts in his defense, with defensive tackle Marlon Tuipulotu and outside linebacker Drake Jackson expected to lead the way up front, and the aforementioned safety duo should get some help in the secondary from a pair of talented cornerbacks in Olaijah Griffin and Chris Steele. The inside linebackers will be worth watching however, though Orlando offered praise for the three most likely to be seen there — Palaie Gaoteote, Ralen Goforth and Kana’i Mauga.

“It’s the player’s decision when you have talent,” Orlando said when asked about Gaoteote, a junior poised for a breakout season in this defense. “When it finally clicks in to say, you know what, I can be really good. It’s the player. There’s a lot of things that are behind the scenes with it. You’re going to butt heads a little bit. There’s going to be some hard love. There’s a whole bunch of stuff that goes into it.”

At middle linebacker, the Trojans are likely to use both Goforth and Mauga at times this season and Orlando said it could depend on what kind of pace opposing offenses play at. He said they have a lot of trust in Mauga as a guy who has some playing experience. But he’s been really impressed by Goforth this year.

“Ray’s (Ralen) a pro now,” Orlando said.” To me, it’s the way he approached the game. I took a photo and sent it to the linebacker group. I usually go down to our meeting rooms pretty early and on his desk where he sits, his playbook was open, the Arizona State two-deep was right next to him and his iPad was open watching cut-ups. I love the way he approaches everything. He’s very prideful about when he makes mistakes or he’s not sharp in terms of doing stuff. He works his tail off. I’m really, really proud of Ray. I really am. We’ll see how he does on Saturday, but of these guys in that room, he’s one of the harder workers that we have.”

Mauga has been battling a hamstring injury this camp, but head coach Clay Helton said he expects he will be ready to play against Arizona State.

As for what the Sun Devils will bring offensively, Orlando and company will need to be ready for a variety of things. Arizona State brought offensive coordinator Zak Hill over from Boise State, and Hill will have starting quarterback Jayden Daniels at his disposal. The Trojans watched some film of Boise State to prepare for Hill and Orlando said they have at least an idea of potentially what to expect early.

“We’re all in anticipation of a whole bunch of shifts, trades and motions,” Orlando said of how busy the Sun Devils could be pre-snap. “We know it’s a big part of what they’ve done at Boise…That’s what we anticipate early in the game, trying to get us moving around and now having our feet set in the ground, so that’s going to be important.”

From there, it becomes all about containing one of the more dangerous quarterbacks in the Pac-12.

“Jayden can extend plays,” Orlando said. “He can make all the throws. We’ve studied him quite a bit. He can step up in the pocket, he’s willing to take hits and he’s smart with the football. He’s a good player.”