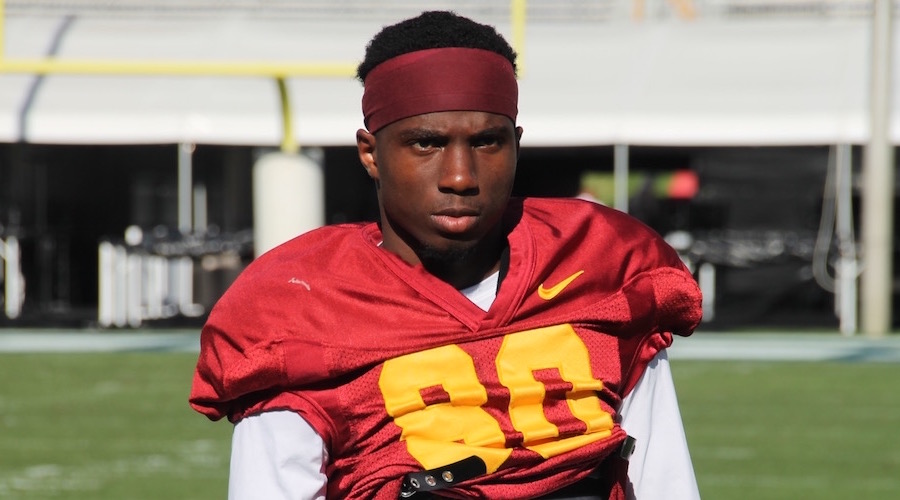 With fall camp officially in the books, and the Trojans’ season opener against Alabama less than two weeks away, here’s a position-by-position look at the depth-chart released by USC head coach Clay Helton on Sunday.

Having been entrenched in a heated duel with Darnold since last spring, Browne, the perceived favorite from the outset, was declared the starter this past Saturday. He brings poise in the pocket, an excellent command of the offense and a high level of maturity to the position. To Darnold’s credit, he made this battle a lot more competitive than most ever imagined it would be, making a big impression with his playmaking skills as a dual-threat option – so much so, in fact, that Helton revealed that he plans to use the San Clemente product in special situations this season.

The fact that Justin Davis sits atop the depth chart comes as no surprise. The veteran leader of the unit, he had an excellent camp. Jones continued to show off his big-play ability, while also showing signs of growth under running backs coach Tommie Robinson. He figures to combine with Davis to form a potent one-two punch. Ware and the explosive Dominic Davis look like they’re ready to contribute as well if need be, while Peters, a former walk-on, was rewarded with a scholarship after seizing the role as the team’s top option at fullback.

Smith-Schuster is still the headliner of a unit marked by depth, but if fall camp was any indication, expect the ball to be spread out a little more than we’ve seen in recent years. Burnett made a strong statement with his play, coming up with highlight-reel catches on what seemed like a daily basis. As a result, he’s now listed atop the depth chart with Mitchell at the slot position. In a mild surprise, Greene and Pittman are listed ahead of Whitney at one of the wide receiver spots. Both players really stood out at times, with Greene showing that he just might have a very bright future at wide receiver, while Pittman shined over the last few days of practice.

A position group that looks to be in a much better place than it was heading into last season, the tight ends saw a noticeable increase in the number of passes that came their way in camp compared to recent years past. As the veteran of the group, McNamara is a classic pro-style tight end with excellent skills as a blocker and receiver. Both Petite and Imatorbhebhe will undoubtedly play quite a bit as well, with Petite, in particular, looking like he’s ready to become a real weapon for the Trojans in the passing game.

With Brown and Mama having performed at a high level throughout camp as they battled at left guard, USC offensive line coach Neil Callaway opted to list them both atop the depth chart – something Helton also hinted at a couple weeks back when he noted that both were likely to play this season. Wheeler is listed as the starter at left tackle, but he was out the entire last half of camp with plantar fasciitis. In his absence, both Edoga and Banner took reps at the position, with Edoga lining up exclusively at the spot through the last four practices. If Wheeler continues to be sidelined, expect to see more of that. Lobendahn jumped right back in with the No. 1 group at center after tearing his ACL last season.

Thought to be a point of weakness heading into camp, the addition of graduate-transfer Tu’ikolovatu, as well as converted offensive lineman Rodgers changed the entire picture here. It’s interesting that Green is listed as a co-starter at both defensive end positions. He’s likely to be in the lineup with the No. 1 group when USC faces Alabama at one of the spots, but the question is who will be at the other – Jefferson or Dorton? Jefferson, who lined up at nose in the spring, sat out the bulk of camp with a back injury, but he returned late and stepped right into action, moving well in the final scrimmage.

Gustin showcased an even-more bulked up 270-pound frame in camp, but he certainly didn’t appear to lose any speed or quickness because of it. Nwosu was a consistent force at SAM, but it’s also worth noting that Ruffin, listed as his backup, finished off camp with an outstanding showing in the scrimmage, compiling at least three tackles-for-loss including two sacks. Hill enjoyed a productive camp after missing the spring. Both Betiku and Murphy were predictably raw, but they also showed off unique skill-sets that make them players to watch as well.

The big story on the inside was the faster-than-expected return of Cameron Smith, who tore his ACL last season. He was brought along cautiously in camp at first, but it wasn’t long before he was back taking reps with the No. 1 group. Almost as impressive was the performance of Hutchings, who is listed as the starting WILL linebacker. A heady veteran, he spent the first half of camp at the MIKE spot, and it’s that versatility that makes him a key piece of the puzzle here. Masina, who possesses prototypical size for the inside, is another player who will continue to push for the starting job at WILL. Powell and Tucker also figure to see the field, with Houston potentially also in the mix. Iosefa made a fast impression at MIKE after flipping over from outside linebacker late, but as a true freshman, there is a chance he could wind up redshirting this season.

The Trojans have a formidable starting duo at corner in Jackson and Marshall. Having missed the entire spring and most of the summer workouts due to track and field obligations, Jackson shook off some initial rust and rounded back into form in a major way, shining throughout the final week of camp. Converted wide receiver Ajene Harris, meanwhile, was one of the surprises of camp, and he will provide valuable depth. Jones was one of the most impressive freshmen performers, and he, too, figures to see the field this season. Lockett and Langley are two other key reserves.

There was quite a bit of mixing and matching here due to a number of injuries, but the overall product appeared to be good regardless of who was in there. McQuay, who also lined up over the slot in the nickel alignment, showed definite signs of renewed life under Clancy Pendergast. Hawkins was sidelined early due to a hamstring inury, but he came on strong at the end. Tell missed the last half of camp with the same injury as Hawkins, but he was in with the No. 1 unit early, with Pendergast praising him for his play on more than one occasion. Lopes and Ross also figure to see time in the rotation.

With Brown sidelined mid-way through camp with a quadriceps injury, the competition at placekicker never quite fully developed, and Boermeester took advantage of the added reps and really got hot over the last six or seven practices. Tilbey and Budrovich are still duking it out for the role at punter, although it looked like Tilbey was starting to catch his stride near the end of camp, booting some deep shots with greater frequency.