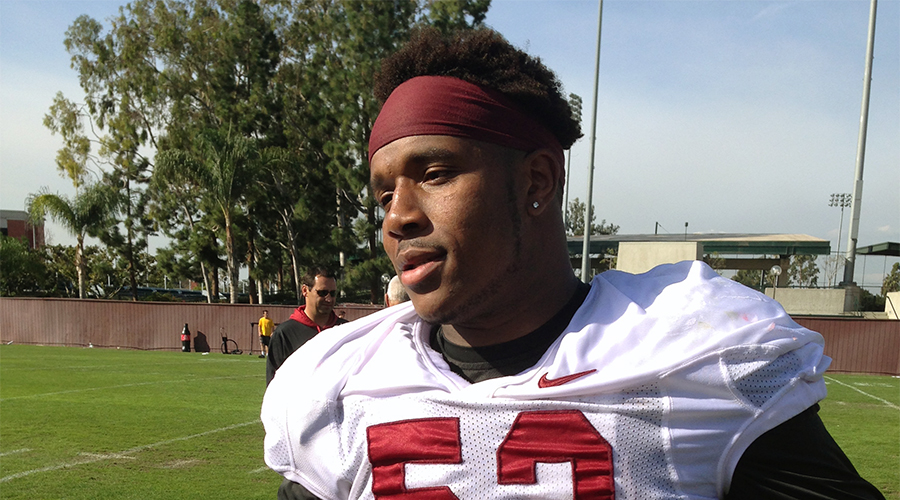 It it game week this week, the start of a new season. Is there there a different energy that’s going around the team?

Oh yeah, because it’s game week preparation. I mean it’s always been high energy, but this week in particular I feel the energy is a lot higher because everybody is itching to get back out there and hit somebody else, you know?

With the loss of a big time player like Leonard Williams to the NFL, how has that impacted the defense?

Leonard’s a big loss, you know? He’s a hard guy to replace, but we got a group of good guys that I feel that can step in and play that role? So, I mean, everybody misses a top player, but it’s just the new ones gotta step up and be able to play that role.

Speaking of stepping up here, you’re a senior now. Can you talk about yourself stepping up as a leader on the team?

I feel like I stepped up to be a leader this year, you know, but I feel as if I learn I also learn from Antwaun and all the other guys about how to lead and how to be a leader.  I feel like guys look up to me so I gotta set the right example.

You mentioned Antwaun Woods, what about Claude Pelon and Greg Townsend, how are you all performing?

We’re performing great, you know. People competing at a high level. We’re making each other better by coming in and working hard each and every day. Just knowing that, that you have such great guys behind you or in front of you. Knowing that spot that can easily be taken, makes you work hard each and ever day.

Arkansas State quarterback Fredi Knighten is a mobile quarterback.  What are you doing to game plan and prepare against him?

We are game planning everybody, not just one person, you know?

How excited are you to be returning to the Coliseum this Saturday?

Oh, very excited. I can’t wait. It’s like a special feeling stepping in that stadium. So historical, you know.  Playing with a great group of great guys, you know,  so I just can’t wait to play on Saturday.