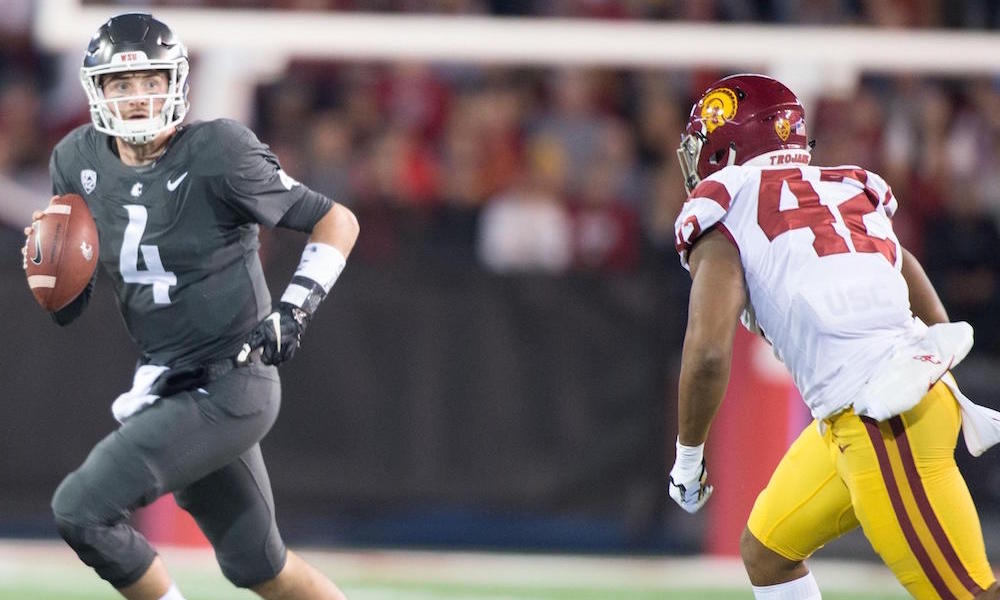 A solid defensive performance is a terrible thing to waste. Yesterday’s loss to a pretty good Washington State team was preventable and the defense played just well enough though to allow for a W. But it just doesn’t work that way as this is a team sport and you win or lose as a team. I’m not sure which hurt our defense more; Washington State’s offense or our own offense. It’s also regrettable that this loss was so expensive in terms of injuries, negative momentum and confidence shaking. Said plainly, just not a lot of good came out of this game and result. I did see at least two upsides to at least try to focus on some positives… 1) our kicking game and coverage is much better and 2) Tyler Vaughns showed something special with his six catches and downfield blocking.

But Defensively Speaking this was a costly game. I really thought we would match up well defensively and I still think that is partly true but less than I thought. Our defense was 85% pretty good but that gets you beat against a quality opponent. WSU is quality enough to beat us though difficult to see that team as the best in the state of Washington let alone go undefeated and win the Pac-12. Let’s see how they do on the road but which does nothing for our team.

One of the keys to the game that I mentioned earlier this week was to watch to see how our offense on the field wins the LOS and time of possession battles. We won neither of those which of course puts additional pressure on our defense. Some folks wonder how we were even in the game late into the fourth quarter given the state of our play especially on offense. Easy enough to figure out…5 sacks, 2 PBUs, holding WSU to 3 out of 4 conversions in the redzone and 1 interception on the WSU’s 3-yard line. Honestly, it was then when we couldn’t put the ball into the end zone that I knew we were really and truly in a tough situation and our magic was getting stale. So, when WSU runs 81 plays vs. our 58, converts 9 of 19 3rd& 4th down attempts vs. our 3 of 12, commits 6 penalties vs. our 9 (I’ll not comment on the Pac-12 officiating since it’s to no effect anyway) that’s not a great USC team effort.

Defensively though the effort was about consistent with the prior week but you could see the guys wearing down both upfront and in the secondary. Secondary play was pretty good about 2/3’s of the time. Then there would be a blown coverage or too much pocket time for Falk or a bad angle by a ILB missing a tackle. These breakdowns offset the brilliant plays by Nwosu and Green plus solid play by a few others including Fatu

The defensive scheme used was creative by Clancy Pendergast with the coverage responsibilities designed to take away the slants and intermediate crossing pick routes. I was surprised by the two ILB look used for much of the game as I thought he would use more 6 DB (dime) look for maximum coverage. But that’s also why the RBs would find the side away from strong coverage and get open for short gains in the flat or sideline. That’s a lot of territory for an ILB to cover especially if the ILB (Will or Mike) is watching for the underneath route first then reacting to the RB. Frankly you’re trying to cover 5 receivers then and unless you pressure the QB somebody is going to get open short. Also, with WSUs use of wide splits there is a tendency for more isolation in the LOS box. That makes stunting harder but also creates an opportunity for us to defeat one-on-one blocking. Producing five sacks is a pretty good day but just not enough when combined with our serious offensive struggles. And we are struggling, badly. As a side bar the offense just hasn’t improved most of this season injuries or not. Except for Stanford (who wishes they could play us now btw) our offensive performances have been choppy at best and we very publicly ran out of magic yesterday.

So, what’s next? Well apparently, the team has the today and tomorrow off. Unclear to me how that helps this team improve especially the younger players who little practice and playing time and that now need to contribute effectively for us to be able to compete the win the Pac-12 South and Pac-12 championship game and lest we forget beat ND in South Bend. Even at this time last year we saw more improvement on both sides of the ball and on specials than what we see today. That has me more concerned than even the frightening toll of injuries that continue to mount or even Sam’s shaken confidence.