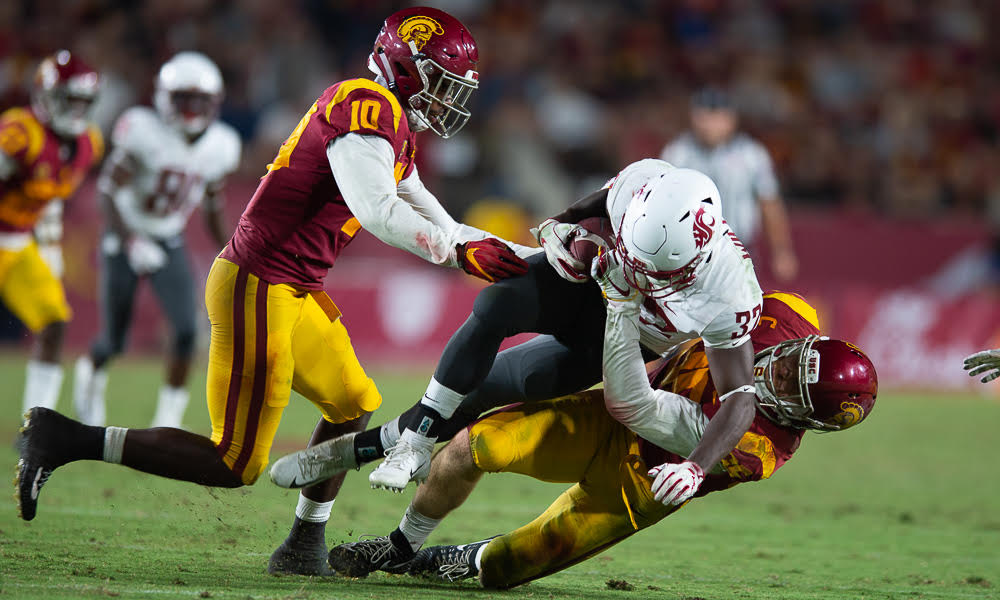 Friday night’s game was equal parts entertaining to equal parts frustrating. At the end, we stole a victory away from WSU with just enough offense and barely enough defense and a memorable field goal block by Jay Tufele which was the game saver play of the night.

Clancy Pendergast threw just about everything he had at Washington State. The cupboard was bare with respect to schemes, tricks, personnel packages (there is always more mathematically I suppose), line calls and secondary coverages. What we saw was a great clinic showing different coverages and alignments. The fact that much of it didn’t work doesn’t take away of the illustrative value. Of course, USC football games aren’t about producing a clinic but they are about winning. We did, thought the defense was less a part about the solution and more about the problem.

• D-line pass rush continues as “awful”. We have 2.5 sacks for the season so far and one on Friday which was really a coverage sack and Menshew escaping the pocket.
• Why is our pass rush awful?
o Our DLs continue to lock up with O-linemen and can’t penetrate.
o When it’s a clear pass play the DLs must move their arms and arm chop the O-linemen. If they let the OL get their hands on them cleanly forget about it… we stand little chance of breaking down the pocket. Our interior linemen (including Rector & Gustin) have a “whopping” 8.0 sacks with only 2.5 from the interior DL.
o The DL has produced (excluding sacks) another 2.5 TFLs…that’s it. Not productive and certainly not impressive. Sure, we miss Green and Nwoso but that’s college football. We have to better.
o I think that Graduate Assistant Austin Clark’s move to University of Illinois as their DL coach has had a much bigger impact on our DL production problems than the coaching staff ever thought.
• We still are looking for our first interception of the season. Out of 141 attempts for the season we have zero picks. WSU put it up 52 times, completed 37 (a whopping 71% completion rate). We got zippo picks…or fumbles for that matter.
• So with or without Gustin, we couldn’t get to WSU’s QB and rarely pressured. What was positive were the PBUs and in particular the pass blocks in the box. A shout out to Hufanga who had a pretty good game and a critical PBU downfield on a fade route. On that play, there was a little pressure on Menshew and he threw the pass too shallow and Hufanga made a great play on the ball. Oh, and he was where he was supposed to be in coverage too. It’s nice when a plan comes together…
• Clancy threw multiple coverage at WSU including: Cover Two, Single high, man-up, man-back, zone press, cloud (two safeties and one CB in deep coverage with one CB tight in the flat short zone), quarters and even Cover 8. I’ve never seen CP call a cover 8 (3-man rush with 8 in coverage) in a regular game situation. He was trying anything to help the secondary. Btw, WSU did check (audible) to a run play on one of the Cover 8 looks. WSU was well coached and prepared.
• Regarding 3rd/4th down conversions; not good as you know. 3rd down 7/16 and 3 for 3 on 4th down attempts. Total is 10 of 19, 53%. Somewhat worse than the crazy overall 71% completion rate for all passes by WSU.
• What adjustments did we make? CP did get his guys focused on sideline audibles in the second half. You could tell if watch the defense looking to the sideline pre-snap after th defense signal callers give a hand sign.
• Also, CP rolled more guys into game but stayed with Hufanga at safety. Good call. We need Hufanga and Tell working together as a unit. Nickel back is a jump ball.
• Biggie played pretty well again, got away with a tug and was very effective against the run. But our opposite CBs are just getting picked to pieces and not helped by weak pass rush. That’s a lethal combination.
• Run game control should be stronger.
o We don’t run any D-line stunts so our DLs are predictable targets. CP uses the two ILBs in the A-gaps to confuse the O-line but that ship has sailed unless they can blow up some plays in the backfield.
o Difficult time defeating blocks…fundamentals are a work-in-process. Shouldn’t be at this point in the season.
o Poor tacking continues to be a huge issue. Tackling drills in full pads might help.

So, this coming week will be a huge road test for us. Tate at QB just worries me to no end especially in Tucson. Hopefully preparation will include full pads this week.