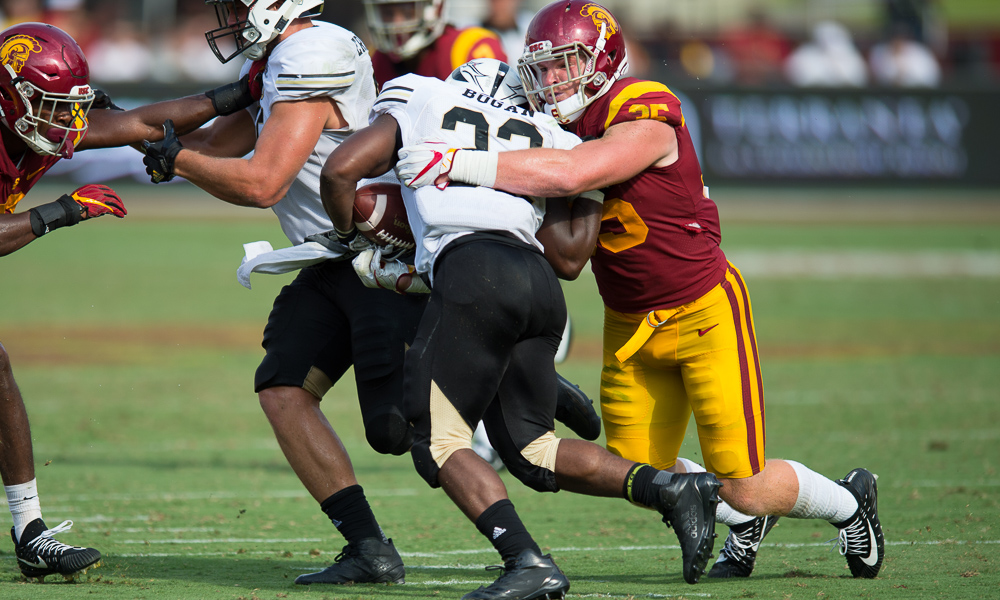 Let’s get this point out there upfront…we were very fortunate to get a win yesterday against WMU. They out hit, out played and out coached us in this opening game. In particular, this is even truer when looking at the video replay and isolating certain players and their reactions. The prevailing viewpoint has been that our defense was more prepared and ready to play with fewer questions than the offense or special teams. That was certainly not the case yesterday and was on full display to all…including Stanford who are up next.

A quick but heart felt shout out and congratulations to Jake Olson and the Olson family. These are great people and Jake’s celebration is as genuine as can be. Awesome and it is truly great to be a Trojan…always.

The base defense was classic Pendergast vanilla package with limited use of blitzes and other pressure sets. Cornerback covers were press/zone (mostly Biggie) and zone back on the offside cornerback (Jones). Standard safeties set with both a strong and free. D-line was a combination of 3 and 5 techniques with the usual defensive end set on both ends of the line of scrimmage (LOS). Inside linebacker set was Mike (strong side & middle) and Will (weak side away from tight end). Ok, that’s the typical set and used largely throughout the first half.

The defensive performance shortfall starts right up front. Regrettably this is not a new story regarding our defensive play for some years now. We had similar issues last year until Stevie T. took over and Coach Pendergast went strong on “manufacturing” pressure with riskier blitzes and tighter press/zone or man coverages with cornerbacks (after the Utah game). I suspect we’ll see more disguised blitzes and A gap (over the offensive center) linebacker pressures next week. Btw, Stanford knows that too and will try to identify our pressures and audible and/or read plays away from the stunt. Stanford is good at attacking in this way. Western Michigan didn’t have to as we played a pretty straightforward look. That’s ok if we get a good push upfield but that didn’t happen much at all yesterday.

When looking at the statistics the view gets even more in focus. In the first half WMU averaged 6.2 yards per play in the first half versus 4.6 yards per play in the second half. So what was different? Yup, Cameron Smith makes that big of a difference. There were some adjustments along the D-line with some inside shading of both 3 and 5-technique defensive lineman but the biggest change was Smith with his physicality, presence and motivation. Our Will linebacker play was soft and showed inexperience. The play from that position has to get physical or Stanford will just attack those gaps directly and with mis-direction. An example of over-pursuit and mis-direction was the quarterback throw back for a touchdown. The current focus is on Porter Gustin’s near interception miss on that play. But when you review the video, look where Houston is as he’s way past the centerline while he should have reacted back to the ball much faster and helped defend that play inside out. He was more aggressive (good) but over-pursued (not good). Also all inside linebackers have to attack the blockers. You can’t sit back and let the blocker come to you especially when you’re 5 yards off the LOS…you have to get up into the gap and take on the blocker so that the running lanes are squeezed down. This is about technique and is readily fixable with drills and practice.

One thought that I’ve heard from some players is that they weren’t sure what offense WMU was going to run so our practices were broader and less focused. Well I guess that’s ok as far as it goes but it doesn’t explain the lack of physicality that was on display.  I think that an opposing QB with no starts vs. an experienced excellent proven running back crew would lead me to get ready to stuff the run and set up 3rd and long situations. Can’t say we were successful as WMU had 25 first downs 12 by run and 13 by pass. WMU was 100% effective in the red zone all touchdowns too. The defense was on its heels much of the game with the 3rd quarter our best defensive output. Our 3rd down stopping effectiveness for the total game was only 4 out of 11 situations…really bad 3rd down defense which unfortunately keeps our offense off the field. The defense produced only three TFLs (one was a sack) all in the second half.

So what happens next? There is plenty to build upon from this game. A win makes this defensive lesson more tolerable and WMU is a very competitive football team. Stanford doesn’t have to adjust much of their approach based on this game. They will focus on more of their same game plan plus add a much more effective passing game. We have to get better this week and in a hurry. All these issues are fixable but I suspect there will be some personnel review and rotational changes this week. What changes? I’d start upfront and work backwards; Coach Pendergast will need an updated game plan for ‘Furd. Our defensive guys are better than this performance indicates but you have to execute the fundamentals with physicality. Frankly I was hoping that this season we had put these kind of issues behind us…not yet.