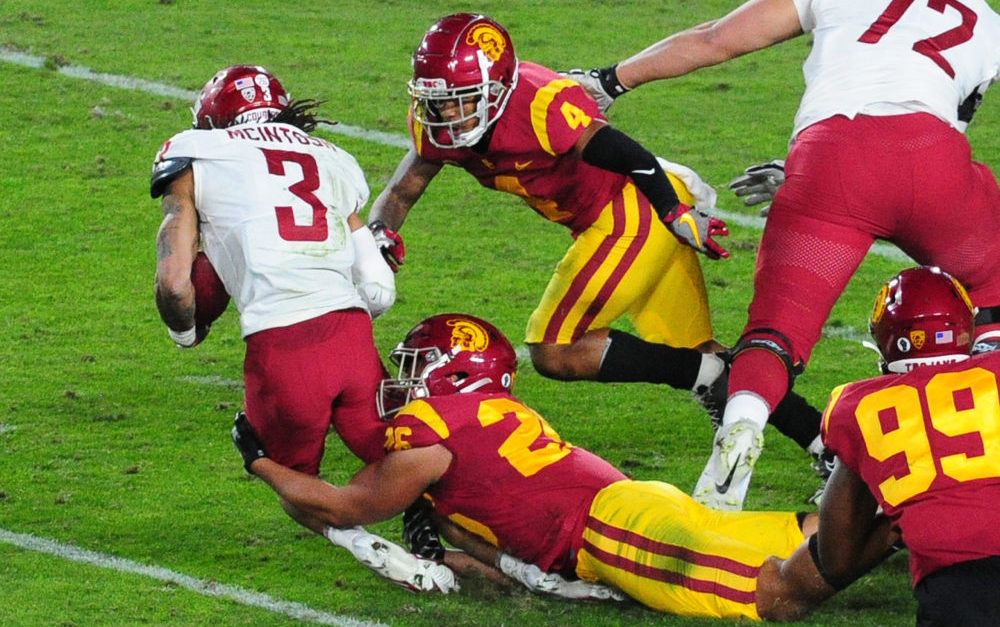 In case you were wondering about our defense against WSU, it actually was quite clever. Orlando cobbled together a defensive set that was a quick and athletic lineup utilizing the players he had available. To say that the statistics for this game were bizarre is an understatement. But the athleticism and enthusiasm were phenomenal. Watching Talanoa Hufanga play football at any position is a joy for me and I don’t care where he lines up, I just like watching him play a man’s game of football…not bad for a guy with gimpy shoulders.

So what was the defensive set that so thoroughly confused WSU that they also decided that they too needed to play man coverage? Big mistake by WSU but oh well, I’m way over that already. What the defense did was really use (don’t hurt me) a Clancy Pendergast throw-back retro look. Orlando used Hufanga and a dime back in the box which is what Pendergast did with Su’a Cravens especially against a running RPO quarterback when the ILBs were not crowding the A-gap. We don’t usually crowd the A-gaps and we didn’t have any ILBs. So In this case last night, it was a matter of necessity being the mother of invention.

When looking at the stat sheets, it is baffling to see things like:

* No tackles by Drake Jackson

* Only one tackle by a Tuipulotu and it wasn’t Marlon

* Only 5 USC penalties in total, but three led to first downs

* Plus 3 turnovers for the defense – great job

* SC offense had the ball for 9:43 minutes but produced only 3 points in the 3rd quarter

* Total game net 5 yards of USC rushing. While 80% of this total was gained in garbage time (yup, 4 whole yards!)

* Season high of silly dance moves (there will be a penalty called eventually, it is the Pac-12 you know)

For the record, the defense did its job again, similar to the Utah game. Get turnovers, spark the offense and populate the special teams with enthusiasm and good coverage. The offense is so good against man coverage, why would any coach do that??

Maybe UCLA will try to prove something too, but I doubt it. The formula is simple; Cover 7 or 8 with two high safeties with an occasional pressure package, stuff 1st down runs and short yardage. As for defense, pound the ball at us, use some misdirection, pull some OLs, RPO and breakdown the defense with QB runs up the A/B gaps. I don’t expect UCLA to make life easy on us with man coverage so it’ll be a contest of patience on our offense but some deeper throws and completions will be critical for us.

And the defense will have to penetrate the LOS and stop the run game on first down and short yardage. Therefore, the LOS box players (Marlon, Drake, Nick, Tuli have to play the game of their lives to hold back UCLA which is a dangerous team and matches up very well against us.