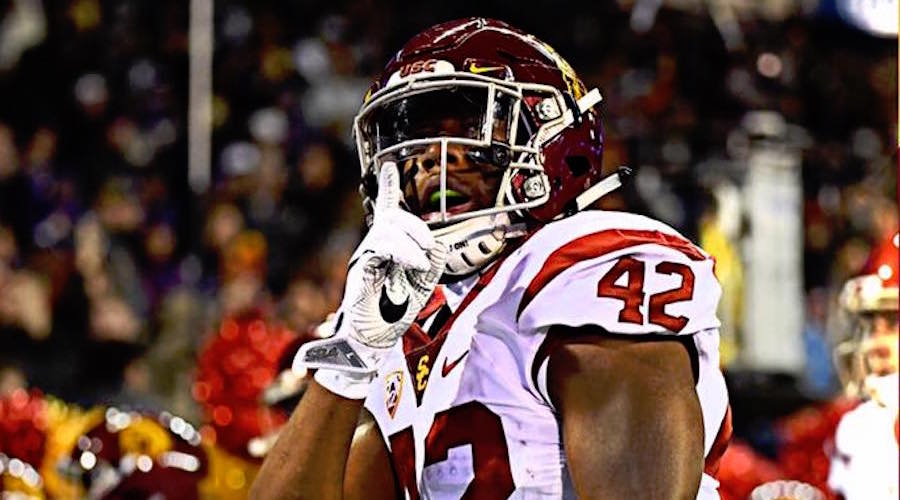 And that folks is Trojan football. For the first time in years we clearly out hit and smashed-mouthed a highly ranked opponent for four full quarters. We never took our foot off the gas or their necks. I am thrilled for these players and coaching staff. Much was lost earlier this season and large national audiences saw it too. Well some of those same folks just saw what real Trojan football looks like and much was regained. Sure there’s more wood left to chop but this team has raised its own bar.  Not Alabama or others who showed us how far from great we were but this team last night showed themselves and others wo might be paying attention how Trojan football is played and what our expectations are. Enjoy the great win but let’s not be surprised that we accomplished what we set out to do. It’s time to back our pre-eminence in Pac-12 and CFB. Now we are a very dangerous and confident team. One to be feared when we focus and bring it. We know what we are capable of achieving in very hostile circumstances…and so do others. Awesome and grateful for these players and coaches.

Here are some key highlights from yesterday that we should think about. Then I’m going to describe some of the X’s and O’s. And there was a lot of game planning that took place for this defense to so thoroughly throttle a high-octane league leading Washington offense. Consider this:

This is about the game within the game. CP had three missions to accomplish 1) Make Browning uncomfortable and lessen his progression reads 2) stop Gaskin’s running and 3) contain Ross (a tall order as his speed is blazing fast). We can all agree that missions 1 and 2 were well achieved and Ross showed how good he is but scored only one TD…so he was controlled in scoring but was still a dangerous weapon that was close to making last night’s game a lot closer.

One of our key strategies was to pressure QB Browning with four rushers and variants of Cover 7 (seven players playing pass coverage on pass plays). How we did that was interesting using almost exclusively two DLs (there were occasional three DLs but probably not even 5-6 plays mostly short yardage). What CP did that was new was using Hutchings and Smith to cover the A gaps with two DLs in 3 technique and 5i (inside) technique and then several options happened 1) they rushed and Gustin and Nwosu drifted a bit wider for contain or coverage for screens and reverses 2) one would back off into underneath pass cover on TE, slot or the closest hot receiver threatening 3) both would back off and then Nwosu and Gustin would bring strong pressure off the edge. There was a lot going on here beyond the obvious. The key to this approach was Stevie T and Rasheem in that order. Stevie T had to own the offensive center (most vulnerable player for UW’s offensive line). This dominance of the center allowed Rasheem to get upfield penetration and start to shorten and collapse the pocket. That in turn makes DE/OLB angles much more favorable to attack the QB and interfere with his vision and passing lanes. Also Gustin (but not Nwosu) twisted inside at least three times that I counted. Ok that was a lot to absorb but what CP did wasn’t done before in that manner. Again another new wrinkle that was added to the base scheme which the defense is clearly starting to understand pretty well. To put good pressure on the QB with four rushers is key to this defense (and many others too) otherwise you have to manufacture the pressure with exotic blitzes which creates vulnerabilities.

Run stopping was clearly impressive and was main pillar of great defense. The A and B gaps were well controlled with the two DLs and two OLB/DEs. Hutchings had a monster game even though he is clearly banged up with bad shoulders so that he has trouble wrapping up. Smith and Powell played well with Smith just being a big rangy player who can really make a mess of the underneath throws for a QB. Gustin and Nwosu both played lights out a very savvy and disciplined rarely losing contain. One vulnerability that Washington exploited was our C and D gaps to our 5i technique (sometimes it looked almost 3 outside to me). What happens is the offense generally used a TE, pulled an off guard or center, offensive tackle blocking down on our 5 or 3 technique DL. This creates a running lane just off tackle that the ILB has to get over and fill. That is a tough assignment to carry out cleanly as there is a lot of traffic and clutter on the inside and our ILB (Hutchings usually) really has to sell out to the C/D gap…that’s a problem as his first responsibility is reading thru the A gap to the running back and taking away the inside run. U-dub converted several first downs with this play though we controlled the run game overall very well.

Secondary coverage was very complex yet fast. The coverage was pretty much about Ross and controlling him. He was given a lot of room but with personnel surrounding him to reduce explosive plays. We all know that his 70 yard TD pass was a result of a great move on AJ and no way can safety help get there is time on a fly/wheel route. The stop then has to come from QB pressure and we didn’t get to Browning in time. It was a good reminder to the defense that UW is a dangerous offense. The idea is to use the underneath coverage to take away the easy throws and force Browning into a perimeter game and deeper balls which he has trouble with. It worked well…this time.

This was a great performance home or away but doubly so given the hostile environment. For those who haven’t been to Husky stadium it is loud with fans seemingly ready fall on top off the field. The standard that this team established is the re-establishment of Trojan football. While new to this team this is what we do. Remember the work and preparation. Remember the four quarters of hard hitting and remember that winning isn’t a birthright you work for it so enjoy it. Fight on!