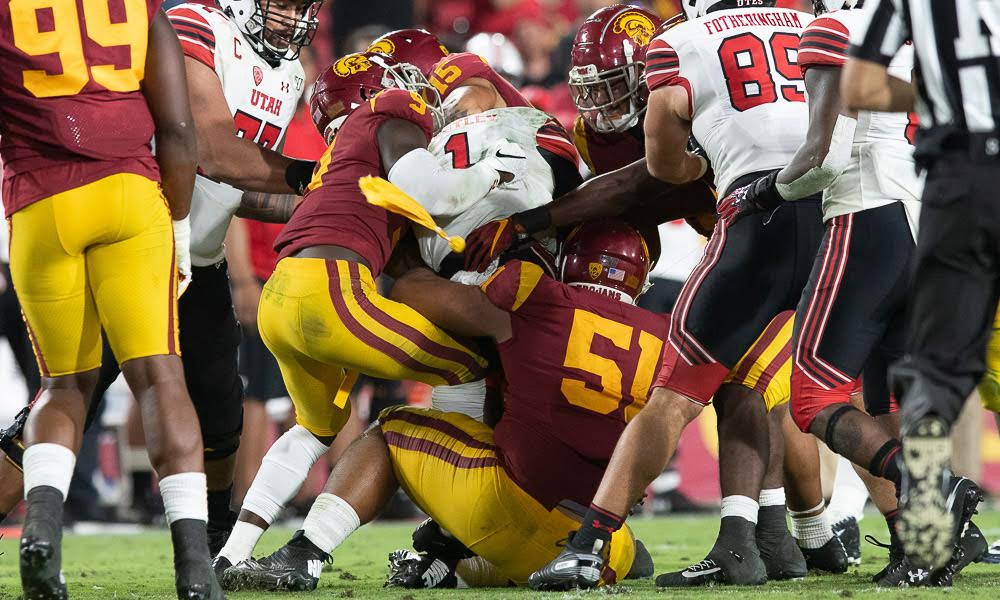 Like a lot of things, I suppose, last night’s game against Utah was a beautiful thing to watch or maddingly frustrating. I would say both are true but with a heavy lean into beautiful.

Ok, so we all get it. We got out gained, out TOP and generally fell short in such critical areas that I’ve never seen a team win against a Top 10 opponent like this ever before. This is certainly not a recipe for sustained success but let’s keep in mind that we hammered Utah with big play after big play with our “3rd” string QB. I put that in quotes since the coaching staff may have put Matt Fink as 3rd string right ahead of Jack Sears but most of us never really bought into that notion.

Defensively Speaking, what was going, you might ask? That is a question that I sure was paying close attention to because Clancy threw just about everything we have in the cupboard at Utah to try and stop them. I like to understand the scheme we use and how it worked and who played well in the scheme and what are the Areas of Opportunity.

I’ve read from a few other sources conflicting thoughts and analysis regarding our defense and how they performed. Frankly, I think they all get it wrong most of the time. So let me try to settle this matter down and provide insight into what is scheme and what is execution.

Our base set on most first downs was w DLs (two DTs and two DE). Their techniques varied…a lot. The two DTs played mostly 3-technique with inside shade on TE side (generally strong side). The two Des played some 5 tech (outside) and 7 tech (inside). Now, there were variations all night but this is the base. Mike Linebacker aligned with the running back if to the TE side. Will linebacker generally aligned on the inside of the DE but back about 5 yards. We played man or zone-up to one side and man-up on the other. We started out single high safety (Palo Malo) with Hufanga toggling near the box or back. This was our base defense.

What Clancy did was personnel and situationally dependent. The edge containment was generally a train wreck most of the game. In some 3rd down situations CP substituted a linebacker (Mauga, Echols and others) and played line stunts on the strong side edge. By this I mean a safety and linebacker would twist off the edge often times with a inside pressure. I noticed some great twist work by Tremblay freeing up both linebacker/safety combo in the 4th quarter. In this situation, we moved the DEs inside to a 5-technique. Ok, this was an early adjustment that CP clearly had ready as part of the game plan. He also simplified EA’s role on the backside of this alignment by rushing him off the weakside edge then flatten down the line of scrimmage or get at the QB spot. These moves worked pretty well when executed properly. The risk here is the intermediate zones are going to be exposed so you have to pressure the QB or it’s an easy throw and catch.

What didn’t work was poor tackling. Honestly, I’m just flummoxed about our lousy tackling. The solid tacklers (starters) are: Hufanga, Tufele, Jackson and Tuipulotu. The rest of the gang really range from ok to really bad. Rector was not an impact player, EA made some tackles but missed quite a few TFL opportunities and 3rd down stops including missing Huntley the QB…badly. Pili gets gassed too easily and as such isn’t a pass rush factor or in pursuit. Houston is a lateral player and has his share of misses…not a new factor. Tremblay is really improving which is encouraging. Murphy is a mixed bag with height and strength but inflexible hips which is a real problem for a DE. Our secondary is in constant flux so its very difficult to judge, but Palo Malo got in a few licks but his physicality needs to ramp up to match Hufanga.

We all know that mobile QBs just cause us fits and last night was no different. Once Moss was out of the game QB Huntley carried much of the team’s offense on his shoulders…and legs. Our Red Zone defense turned out to be the difference maker. Penalties have to get corrected and I’ll bet you Whittingham is working on Utah’s penalty issue too. Let’s just say it, Pac-12 officiating is just an abomination. Officials throwing a combined 29 flags (two were declined) is nuts.Officials should not be part of the storyline.

I have to make some comments regarding the offense. We witnessed the emergence of a new Trojan hero…Matt Fink. Matt, way to go and we’re going to need more of your leadership and football savvy. Congratulations to you and a special shout out to Michael Pittman. MP, you are a man among boys and I am a grateful Trojan that you came back for this season. Finally, I’m concerned about Slovis and his apparent concussion. He got his bell rung last week at BYU as well but kept playing. There is no question about his heart but he needs to be protected from additional head trauma.

Finally, we’re going to need to run the ball to beat U-Dub. Everybody on this site knows that. Boom, get it done guys as you can’t pull off this type of unbalanced win in Seattle.