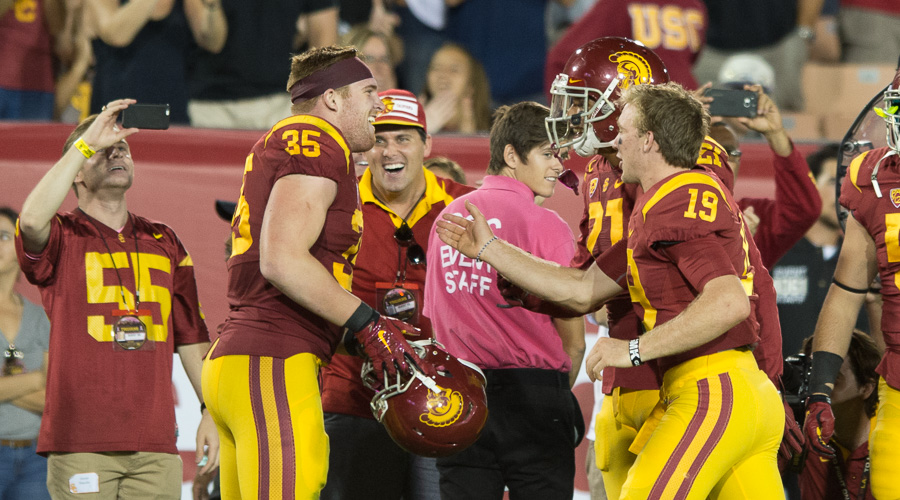 Well that was one for the books wasn’t it?? Wow. Sometimes one player can just turn something around. Usually it is an offensive player or special team big play…but sometimes something very, very special happens and you saw it yesterday. An 18 year old true freshman took the entire game, season, coaching staff, fan base and program and carried it into a new better different and legendary place. Boom and there it is. Once in a generation defensive performance and once in a lifetime freshman effort. Some Hollywood wacko is writing the movie script right now going, “naw, I can’t do that nobody will believe it”. Believe, it happened and he’s a Trojan. You know I’m not given to hyperbole but that was one for the ages and I’m glad I saw it and enjoyed it.

Pretty interesting I’ve gone an entire paragraph with no mention of a name and ya’ll (I’m in Texas right now) know exactly who and what I’m writing about. But how did this individual record come about and how did the rest of the team do? Ah, the rest of the story is fascinating to me. Let me explain…

We opened and stayed in our base 3-4/4-3 Hybrid (depending on your POV and whether we use a NT or a DT). You better get used to that as that’s Wilcox’s scheme…period. He will blitz, he will slant but he will not twist the DL or drift from his Hybrid basic. Done. We used a 3-man rush about 12% of the plays (by my count), 4-man rush about 50% of the time and 5 or more man rush 38% of the plays. Ok so statistics are nice but a really smart guy told me once “if you torture the data long enough it’ll confess to anything” so what’s up? Against a predominately power running Utah offense we blitzed and brought multiple angled attacks more than any other game this season…by far. The closest I’ve found was against ASU who threw the ball a ton against us and we maxed pressured them about 25% of the time versus 38% vs. Utah (according to my notes). Why the max pressure against such a strong running team? We were trying to take away the running lanes and in particular neutralize Deontae Booker with our smaller quicker bodies. One result by utilizing different reads Wilcox confused QB Wilson and prevented him from easily calling an audible or utilizing late signaled pass plays.

I think this is a creative approach so for Wilcox that is a positive move. Also it is consistent with his nuanced approach to defense. However the physical punch and counter-punch defensive game isn’t his strength. But here I think Coach Helton stepped in and upped the P-meter (physicality meter and I just made that up but it would great to create that metric). But if there were such a thing as a P-meter that metric would have seen a dramatic increase with ebb and flow. Utah is a tough team with some serious talent coached to play tough every down. The 2015 Trojan defense learned a lot about Pac-12 football and themselves and Coach Helton. I’ll add that Helton’s commitment to the run and TOP was spot on against this team…frankly against any team for that matter sprinkled in with the big play.

According to Utah’s free safety Paul “Wow, credit SC they came to play today. Didn’t expect to get punched in the mouth like that…” A pretty telling statement on so many levels but let’s just be clear that more mouth-punching (metaphorically) is in order for this and future teams. There are generations of physical Trojan football which leads to more success than an anomalous finesse approach. I can’t think of a successful finesse defense ever. The net results of last night’s smash mouth approach utilizing a three DL setup is pretty unique but an impressive outcome of 33% Utah conversion rate of 3rd & 4th down attempts, 3 sacks, 3 pass breakups, 7 TFL’s and +4 turnovers and one pick six. While the scheme was a familiar one as mentioned earlier there was a heavier emphasis on slants and second level bodies into the box. From the third level McQuay was also tasked on certain situations of bringing the wood to RB Booker. Nicely done too. Remember that for future reference against Cal and our remaining opponents. Not suitable for all occasions but a nice effective change of pace with possible forced turnover implications and tough to practice for. I would like to see a corner read blitz added in on a very select basis…these guys are ready and I think Iman could do with an occasional change of scenery.

Cam Smith…that’s the headline for sure but how and why was in position so well so frequently? First the commitment to stop Utah’s run game and Booker forced quite a few passing situations. Second Wilcox’s Hybrid is difficult to read and audible against if the DL is getting pressure on the QB. DL pressure makes everybody’s job a little easier. I surmise Smith did his homework on tendencies and got “coached up”. Cam is a really, really good football player with great on field IQ and skills. Instinctual some would say and I’m OK with that but good instincts are honed well when combined with film sessions, tendency break downs and learning how to transfer the practice field to game day. There for all to see yesterday. Oh did I mention he’s a “true” freshman…incredible actually. Smith’s day included 3 int’s, one pick six, 122 yards All-Purpose, 9 tackles and at least a dozen interviews. A nice day’s work and what a fun and fulfilling day. Nice…

A few final observations 1) I didn’t like that last Utah touchdown…that was an adjustment to man-back to Seymour on a slot screen. We got burned and needs to be addressed as to why that adjustment was called in from the bench…way too easy of a score 2) Soma is a man among boys 3) punt block and punt coverage need lots of work 4) Wood still has to work on his FG’s…we’ll need him to hit a clutch kick or two before this season is over 5) Su’a…please knock down the Hail Mary’s even if it’s not for real. You stole a pick there and I get it but it is bad form…but good game Su’a.