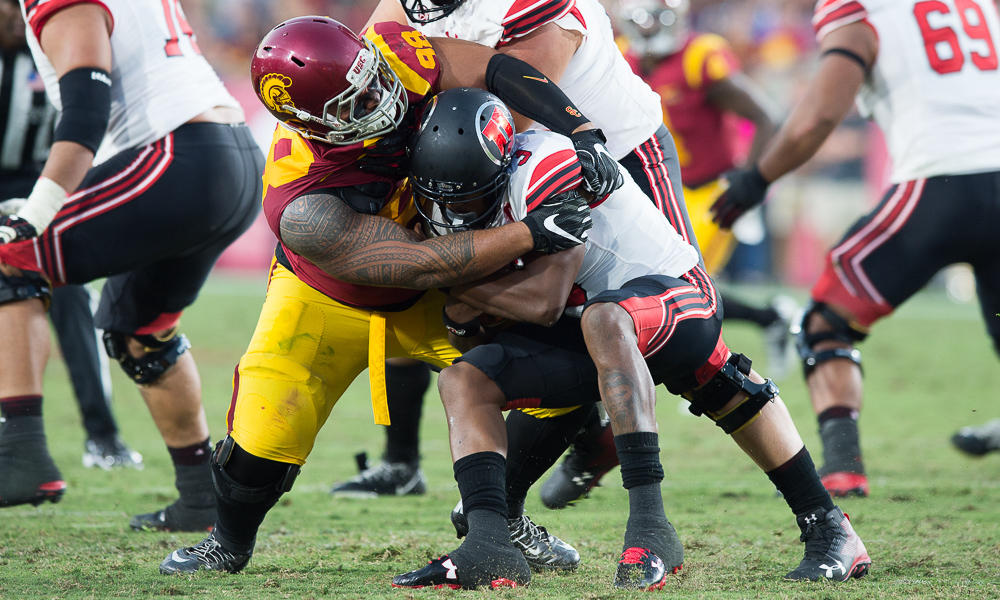 I sure am glad that Coach Whittingham decided to go for a 2-point conversion late in the 4th quarter…otherwise, if overtime was required we might still be out there trying to decide who the winner of last night’s game would be. It was that close as has become the trend of these back-and-forth games against Utah. Nothing but respect for Coach Whittingham and his team and frankly if 1) the game was played in Utah or 2) the regular QB had played then this outcome is different. But it’s in the books now and full attention can be focused on Notre Dame who had all last week to prepare plus this week. How special and so likely (not) coincidental.

Defensively this game, in its entirety, was very much in the “expected” range. But each quarter and drive were unique in their own ways. Let me point out a few things:

1. Utah scored no offensive points in the first quarter…but we did
2. We lost the Time of Possession (TOP) battle by over six minutes (27:16 vs. 33:34) total game and a whopping 11:44 vs. 18:56 in the first half
3. The defense held Utah to 2 out of 4 Red Zone conversions (includes missed FGA)
4. Defense held Utah to 4 of 14 on 3rd down conversions but couldn’t stop the 4th down tries (2/2)
5. Cam Smith had 16 tackles yesterday and a beautiful interception. He really likes to play Utah.
6. Ajene Harris may struggle with punt returns but he made a difficult but game-saving tackle on the 2-point conversion…all is forgiven. If he doesn’t make that tackle Biggie doesn’t get there in time and we have a totally different outcome.
7. Utah’s last TD drive was 11 plays and 75 yards consuming 4:12 of the game clock running it down to 42 seconds…shades of last year but with a better ending (how big was that missed FG?)
8. Btw, our TOP in the 3rd quarter (offensively) was just about equal to our entire TOP of the first half (11:44 vs. 11:43)

Given the disparate TOP results it was essential for Clancy to do a number of things:

1. Change the secondary look between nickel & dime and disguise it. CP did this well using Yikili Ross (#14) in place of Houston to start the game. And even when Utah used a power set with TE we didn’t switch out but stayed with this personnel set early in the game. Pretty interesting use of personnel to make the QB have to make very difficult reads with a look we’ve not used before to start a game especially against a power team. I also noted that in the 3rd quarter Biggie got pulled for a while and Ross was used as a CB in his place. Very interesting though Biggie was back for the next series so I’m not sure about the reasons why. It was clear that Utah decided they’d had enough of picking on Jones and switched their one-on-one isolations to Biggie which paid off big time. Easily Biggie’s worst game on coverage and tackling too. A bad combination.

2. Substitutions were brilliant…again. Nobody uses the substitution rules better that Pendergast. Even the TV announcers figured it out finally (but I kept my mouth shut this entire season just in case somebody would read about it). Without a lot of details if the offense substitutes then the defense has to have an opportunity to do the same…and there is usually no need to hurry…’nuff said. But these tactics helped this defense withstand a very lopsided TOP battle.

3. Offset our one-on-one battles that we were losing in the secondary with good line push and hands up in the throwing lanes. This was an in-game call by CP and he had to increase the pressure for better run stoppage and shorter secondary coverage requirements.

4. Win the line of scrimmage (LOS) battle aka “War in the Box”. We won a few battles here by sacking Utah’s QB four times and making four other TFLs. That said the TOP and final Utah drive were clear indications that the LOS war tilted towards Utah. In the first half Rector was losing his one-on-one battles on running plays too often which surprised me. He went on later in the game to make two excellent sacks and stouter play.

5. Demonstrate excellent and effective gang tackling. Ok, not so much here. There was really poor tackling and given Utah’s RB (Moss gained 141 yards on 20 carries…impressive) strength and determination we showed that this continues to be an area we just don’t get done. Frustrating in the extreme and this will cost us if we don’t fix it. And you don’t fix tackling by “we’ll watch the film and clean that up.” Uh, no that’s not how it works. You improve tackling by teaching it, practicing it and putting people on the field who do it. Look, this isn’t a 100% miss but we are not impressive here. One ILB (not Smith) missed a crucial tackle because his head was down and his eyes were probably closed. That is a fundamental “don’t”. Good tackling starts with positioning, feet moving in short choppy steps, eyes on the mid-section (or the ball if visible), coil at the knees and unload into the runner while “exploding” your eyes open so you don’t whiff. Fundamentals… so if you want to see an example of really great tackling go isolate on Marquise Blair from Utah and watch him tackle.

This was an entertaining and physical football game with a great last second heroic play (Ajene Harris). With the offense struggling and inconsistent this defense will continue to be challenged. Against a full package offense with a top-level QB we will be up against it. The DL played pretty well (Fatu, Green, Dorton, Rector and Pili), LBs mixed (great to awful) and secondary mixed with Jones playing very good football, safeties/dimes/nickels just ok and Biggie had a real bad night which I’m hoping he can improve but have questions.

I do want to point out that we had only 3 penalties last night and all 3 were defensive and lead to first downs. Can’t happen again and Nwosu needs to look inside to the ball not listen to the cadence to stay onsides (Football IQ).

Finally, the O-line played a pretty good second half with minimal mistakes, better run blocking and an ok/solid pocket. This was about the most encouraging aspect of improvement I saw by any unit or group. That combined with tough running backs and the will to win it was enough – just enough.