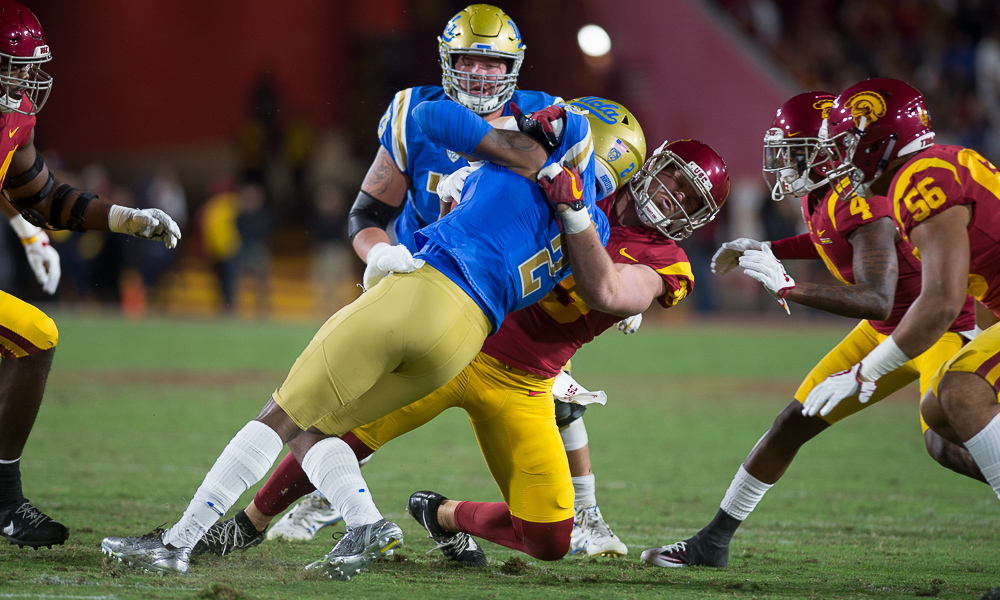 Last night’s 28 -23 defeat of UCLA was not exactly a game for the ages but a welcome victory nonetheless. And that, even after a grueling and grinding 12 straight regular season games surviving many challenges, adversities and air miles. I did appreciate that there were a number of memorable plays, good red zone defense and stretches of strong efforts. But clearly there were also a number of missed assignments (secondary’s most damaging), new or nagging injuries, up-tempo derived fatigue (a new syndrome – UDF I guess) and other issues that were ultimately overcome by this, now 10 – 2 team…just barely.

The defense opened the game by using our usual base set with some success. The strategy was to limit 1st down yardage while putting lanes of pressure and containment around Rosen on 2nd and 3rd downs. In the first half we used press man and a press zone with an occasional safety in a single high look usually on a few 2nd and then 3rd downs. This set up was oftentimes working but with stretches of frustrating ineffectiveness. Up-tempo fatigue was an important weapon used against our defense with great effect on each of the scoring drives. We had to defend 83 UCLA offensive plays (69 for us). That’s a lot of plays to defend against with such an elite thrower (Rosen) with a pretty good set of receivers and pass-catching running backs utilizing a very up-tempo offense.

A review of explosive plays and 3rd4th down conversions is revealing. UCLA produced six explosive pass plays exceeding 20+ yards and also one running play 20+ yards. On the other hand, we produced for ourselves only four explosive pass plays and also one explosive run. When looking at the conversions numbers “ouch” is the kindest assessment I can come up with; UCLA 11 of 20 (55%) vs. our anemic 3 of 12 (25%). Not a lot of help from the O and in particular the O-line.

TOP (time of possession) was about equivalent and penalties “favored” us by one; 11 vs. 12. In total, UCLA had 28 first downs compared to our 24. Yet we won this game largely due to opportunistic defense (two turnovers vs. one by Sam; only 3/5 red zone conversions by UCLA), special teams punt return for TD (now that was memorable and you rarely see that kind of play working in real game situations), missed FG by UCLA (bobbled snap) and just enough offensive scoring to keep ahead of the Bruin scoring.

After getting shredded on several drives in the first half by Rosen but only giving up seven points, Clancy made some helpful halftime adjustments. Good thing, since by holding UCLA’s second half points to just 16 (including a key 2-point conversion stop) our offense was able to put just enough points on the board to win by five. Clancy had to move away from press man coverage to a combination press zone with single high and press man or zone offside. He showed “quarters” a few times in the second half which looks like four secondary players dividing the field into fourths. We used a lot more nickel in the second half which opened up the run game for UCLA (as did Rasheem Green’s shoulder re-injury).

I also noticed some bad “run fits” by Harris and eye discipline issues not just with the secondary (there was plenty of that) but even Cam got suckered a couple of times and one cost us a TD. Btw, that last UCLA touchdown was more on Tell than Jones. I know that Jack Jack got beat athletically but Tell (who had a marvelous game overall) in the second half was supposed to help Jones on deep balls. UCLA ran a two man vertical route on Jack’s side and Marvell bit on the shorter inside vertical route for a fraction of a second too long and Rosen pounced on it and dropped a dime on Jack for the score.

I do want to recognize some shout outs too: Malik Dorton (great effort and filled in for Green), Brandon Pili (who is having the time of his life and is just fun to watch), Marvell Tell (grades out the best most weeks of any defensive player), John Houston Jr. (is improving last few weeks and is becoming effective on perimeter plays), Jordan Iosefa (for staying home and contain), Reid Budovich (for blowing up Holmes on a KO return…and probably his own shoulder) and Rojo (he still makes chicken salad out of chicken s#*t).

So ok, it’s now the long anticipated bye week. These guys need it and I guess deserve it too. The team can go into this T-giving week feeling pretty good about being 10-2 though the pundits will rightly or wrongly criticize our play. As for me, I continue to be concerned about this team and hope they can play a complete game of all facets soon. We commit to running the ball but we eschew a power running attack. We fail to anticipate UCLA’s defensive set (watch Kenny Young #42 btw and that will tell our O-line how the pressure will come run or pass) which is inadequate preparation. We punch down in our weight class but have difficulty punching up. All these concerns and more come to a head on December 1st. For now, get healthy, relax have some turkey and then get ready to win our Pac-12 finale. For that the Trojan family (we’re not a nation, we’re a family) will be thankful.