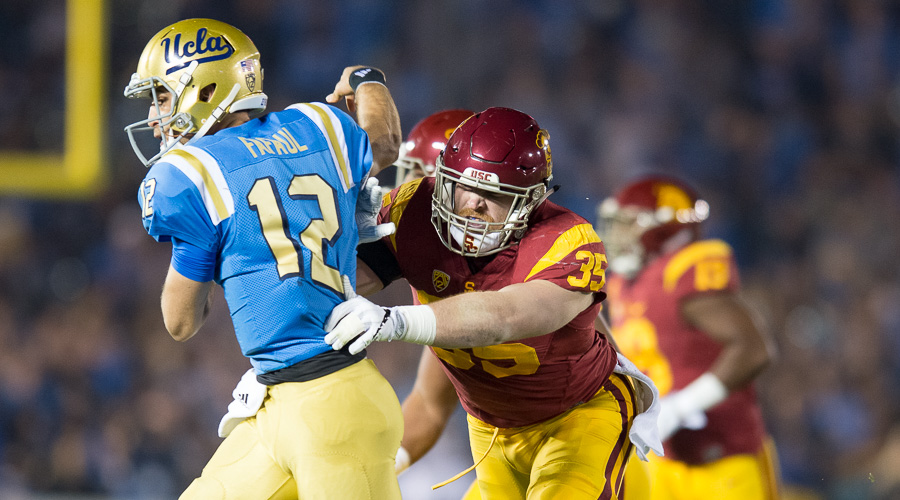 There are a number of pieces that have been consistent with this USC defense over the past several weeks that point to very effective defensive play:  1) good A and B gap control 2) good switching in the secondary and communication and 3) line scrimmage control (LOS). Yesterday’s win in the Rose Bowl was more about #3 than anything else. Since UCLA has some pretty good skill players and a stout defense this game really came down to smash mouth “I’m tougher than you” football. We were tougher than UCLA yesterday which played out pointedly over the last three quarters. There are some eye-popping stats which we’ll cover but the score was much closer than the game was. What is hard to measure is how physical that game was and it was easily the most physical game I saw since the winning streak started. Before we talk about the defense hats off to the O-line for an excellent job smacking UCLA around and controlling a pretty talented group with a lot of 5 and six rushers.

Here are some stats that’ll blow your minds;

The game plan was straight forward enough with a first down run stop commitment, short yardage run stop and force throws either in front into the underneath zones or to the perimeters where we can make a play on the ball. The secondary did a great job in run support and the team reacted well to 3rd down conversion challenges. We covered the A gaps with LBs and used Stevie T. and Rasheem to pressure B gaps or slide inside. Good containment by Porter and Nwosu (who had a quiet game).

That first quarter TD pass was a really excellent call and read by Fafaul combined with a missed tackle. We brought up the safety and blitzed the LB which creates a lane if we don’t pressure the QB and move him. We didn’t pressure and the result was a punch in our mouth that needed to be answered. It was then an interception and a tough one-on-one assignment for AJ that he just plain couldn’t handle. As the game progressed AJ and the entire defense started to dial into their assignments better and the unfamiliar look of the field caused some hesitation by Fafaul. We did set a strong edge to the boundary wide side of the field mostly which allowed us to put more speed and numbers against the perimeter game. This does expose the underneath slants and crossing patterns but by controlling 3rd down we managed this very well.

The net of these factors really lands on the fact that the defense had some execution issues in the first quarter but rallied and out physicalled the Bruins…badly. That is how to take the Bruins down…beat them at the LOS, gang tackle, confuse and attack. We should be proud of what this team has accomplished since 1-3.