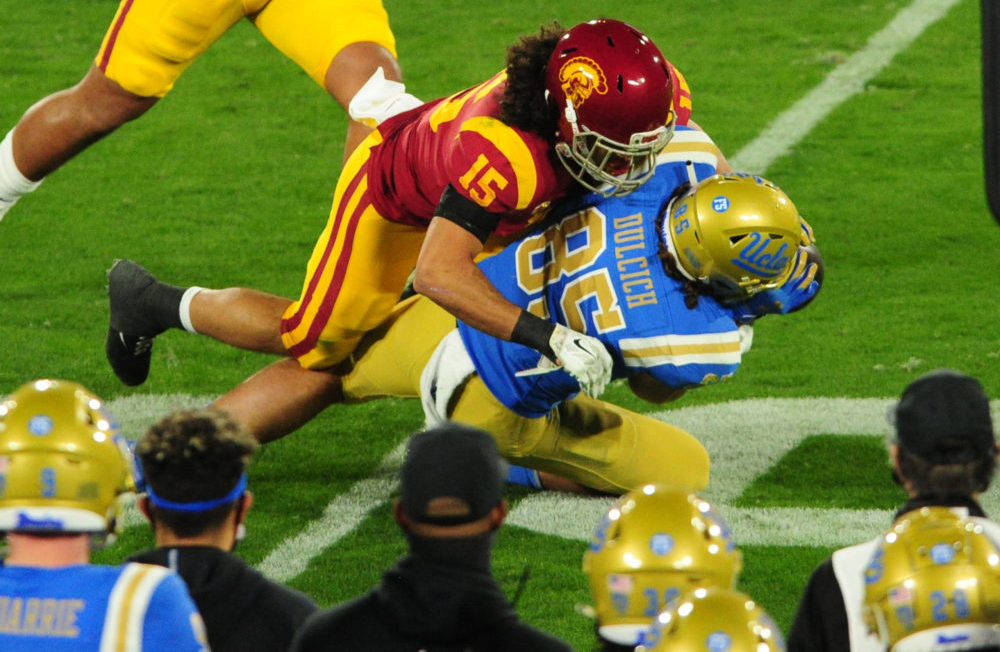 I told a friend and former player that we stood maybe a one-in-10 chance of beating UCLA. I also said to have a chance, UCLA would have to give us the ball +3 we would have to give zero first downs by penalty and UCLA would rush for 250 yards and we’d be lucky to gain 100. But I went on to say, you always have to factor in the UCLA vs. USC weird game factor. And there it is.

We win because this team didn’t play well (especially the defense) but played harder in the 4th quarter than UCLA and our QB is better than their QB and we have some of the best receivers in college football and Hufanga is just a great player. Being down 28-10 early in the 3rd quarter and coming back to win this game in dramatic fashion just underscores something special about this team. We’re accused of playing down to our competition, but in the case of UCLA, they’re pretty good and we just outscored them when it counted, and played just enough defense and special teams to create another instant classic. This reminds me of the ND Charlie Weis situation that after a heart-breaking loss to us in South Bend he got an extension. So maybe Chip will get an extension too. Like, good try, and boy that was close and we’ll get ‘em next year. We’ll see about next year later. Right now, I’m going to enjoy this victory.

This was a game of really anemic LOS (Line of Scrimmage) play both offense and defense. Focusing on the defense, Nick Figueroa had a solid game (bad & unnecessary penalty during Hufanga’s interception return), Hufanga was a man among boys with 11 solo tackles with six assists and an interception. That’s a full day’s work. It’s fair to say the toughest guys on this team are Hufanga, London and Malepeai.

By observation, I don’t know what’s wrong with Marlon Tuipulotu but he is not the same the last few games. But bringing in Tuli in the 4th quarter really turned around the lackluster LOS play. Drake Jackson was routinely blocked by TE or OT and lacked some intensity. That’s two games in row that Marlon T. and Drake Jackson played at substandard levels for them. Putting Drake into 9 technique might make him able to threaten the QB but he’s not fast enough to convert those long pass rushing lanes/situations into sacks and then dropping him into coverage is a poor use of his skill set, unless it is to the short side of the field. However, I really was intrigued when they moved him to ILB and he seemed really comfortable there and made a nice pursuit play. That might be a more used set and effective against a running UW team and we don’t have many, if any, stout ILBs left.

Our quick or “Lite” package is not very effective against a power running team and UCLA is a power running team. Their OL is solid and a Chip Kelly team will pull their OLs often. We lost containment routinely, which made run stoppage very difficult. Secondary coverage was mostly man/press by the corners with single high safety with nickel helping either in the box or zone coverage in the middle zone, taking which every receiver was crossing and “hot”. We got burned by the TE as we had to commit secondary players to run stoppage and the inside vertical routes will generally be available the way we play blitz and pass coverage now without ILBs. We blitzed slightly less than we did against Utah. Overall, Orlando had a tough day but had just enough big plays to put a defensively speaking “W” on the board.

Ok, I’m going to enjoy this win before shifting gears to a quick turnaround for a Friday game against UW or possibly “Orygun”. This was an instant classic and I’m happy for these players pulling this one out against the odds, including mine.