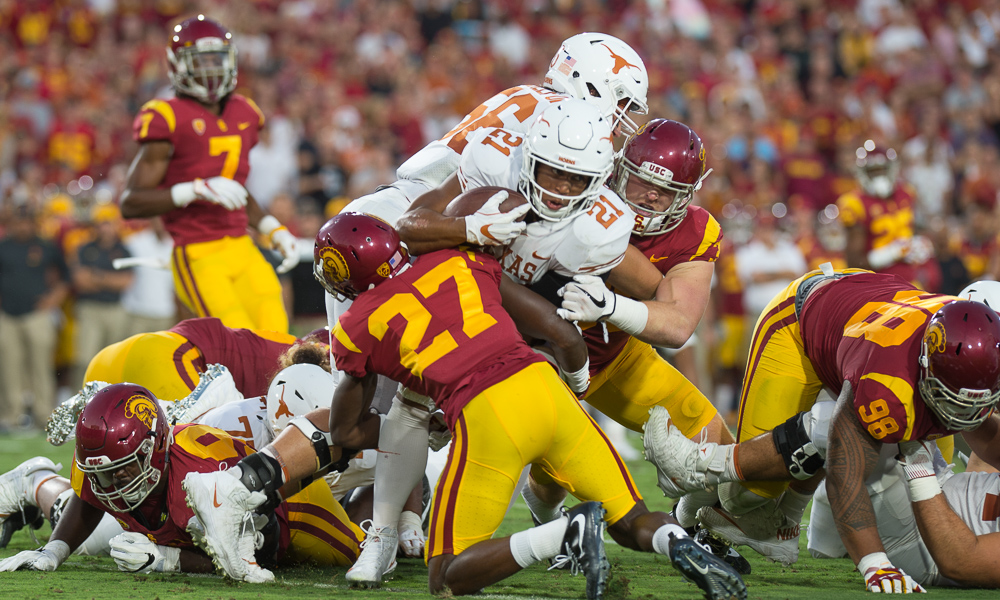 If yesterday’s epic battle of attrition, physicality and skill doesn’t get your heart racing go see a doctor…now, as in right now. Btw, if your heart is still racing consider the same action! That was quite a game with a “sigh-of-relief” exhale final score combined with a more than a little bit of “did I just see what I think I saw?”. This defense was stout for most of the game; pressured the QB, put up 10 TFLs (tackle for loss – includes QB sacks), two interceptions, two fumble recoveries, hold opponent to 68 yards rushing, three rushing first downs, a paltry 33% redzone conversion, 30% 3rd/4th down conversion rate, sniffed out every trick play and more. Awesome…we won the game by 3 points in 2OT which puts all of these pluses into perspective. This was really a close game…and really, really physical.

Our first half defense was outstanding holding UT to 0 offensive points while pressuring another pretty savvy freshman QB. Btw UT’s defense was pretty darn impressive and physical upfront like we haven’t seen since Alabama last year (yeah, that game). Coach Clancy Pendergast (CP) dialed up a similar game plan to last week’s Stanford game but centric to a pistol, wildcat and RPO (read pass/option) vs. Stanford’s sophisticated power attack (another parenthetical btw, but is Stanford overrated or what??). CP used both two and three DL sets depending on down (mostly first and some second downs) in the first half. He had to adjust in the second half to lots of injuries to starters that required a bit more vanilla look but using bigger bodies since that’s who were available. A nice job adjusting to the inventory of skill sets available. The cornerback coverage was man-up on the wide side usually with a zone (both press and back used situationally and to confuse) with safeties helping over the top and inside out on any slot receivers. Texas’s Collin Johnson was not coverable by any of our CB’s one-on-one hence seven catches for 191 yards (0 TDs) and he put a lot of pressure on our secondary with his mis-match. CP blitzed less frequently than last week but got good production out of Gustin, Nwosu, Green and Rector especially in the first half.

The defense got worn down through injury to Gustin, Green and to a lesser extent Jack Jones (knee) and Cam Smith (dislocated finger). Regarding the dislocated finger, been there/done that – hurts a lot, snap it back into place, scream, tape it, go back into the game. Smith did all of that…I really like this young man as he’s smart, effective, tough and reliable. Marvell Tell also had an excellent game not just with his athletic interception but his run support was impressive. Frankly most of the defensive players had their moments and it wasn’t until the fourth quarter that I noticed they were getting worn down and gassed but still putting a strong effort out on the field. We saw Iosefa start and play a solid game and was generally pretty stout and making himself useful and getting around the ball and being physical. Rector had a big day of course and Nwosu continues to terrorize folks. I should point out that Connor Murphy got some meaningful minutes and showed some upside after his first play which he’ll not want to watch in film session this afternoon.

So what’s next? Up comes Cal in Berkeley and they are a real enigma showing signs of a real defense under new head coach Justin Wilcox. More importantly than Cal will be our trainers and medical staff. This season-long battle of player attrition will challenge our coaching staff more than most opponents will. There will be no mercy from the Pac-12 or any team we play. So the youngsters, walk-ons (pretty nice story there with McGrath!) and fifth year seniors et al, I think everybody is going to play some meaningful minutes and situationally this season. This is about team at all levels. Yesterday was a memorable game and I’m grateful for the win. It did cost us a lot to get it.