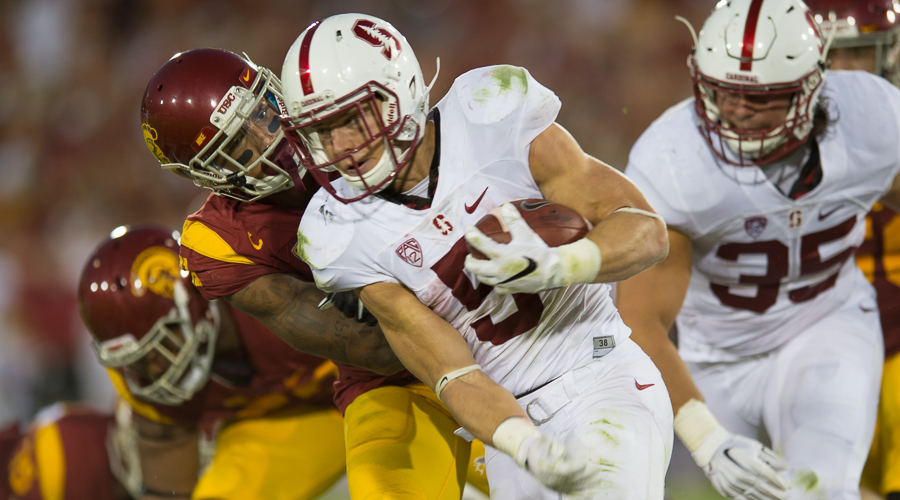 I’ve had pre-game jitters twice this year and both times it was about the Stanford game. This time I was excited that maybe just maybe we would finally put out the real Trojan football defense in a must-win Championship game. That sure didn’t work out too well though it was a good thing that I didn’t eat much as I would’ve had that much more to toss as the game progressed to our whimper of a finish. That was an overall sickening performance on defense and as a team. Saturday was a big flop by a team that doesn’t yet know how to play championship caliber football. Ironically we’re on the right but painful path to improve but that’s for later…

What defense was that? Simple it was the Stanford v1.0 defensive shell played poorly against a very good, disciplined, tough and predictable Stanford team. Yup we got out-USC’d by ‘Furd…again. If we don’t get this fixed quickly most folks will forget about what real USC football looks like and what our stout defenses were ever all about! We ran 3-4 Hybrid with Cover One or Cover Three with safety coverage (safety moving near or into the box situationally). We ran a lot more zone than we did against UCLA. I can’t rationalize or explain that really well but Coach Helton explained it this way, “We decided we were going to load the box, try to stop the run with Cover 1, Cover 3 and they caught us with a couple man situations where he (McCaffrey) had big plays.” I’d say that was a bit understated.

It was a lousy game plan and that’s on Wilcox first and Helton secondly as he approved it. Cover 1 is single safety and zone up or Man-up (tight) coverage by the CB’s. While no panacea and it is often times contra-indicated against power teams I thought it is fine against ‘Furd. I did like it as the base shell for this game as it allows easier deployment of safeties into the box for run support though more difficult to blitz out of in cover One. It also puts tremendous pressure on the CB’s of course and sets up a lot one-on-one contests. In this case we didn’t force many passes as again (like the Stanford v1.0 game) they only threw the ball 13 times (12 by Hogan and 1 by a probable future Heisman winner). Of course that was 10 of 13 completions with 2 passes going for TD’s…that’s a 20% TD conversion rate for completed passes which is unheard of in today’s college game. Stanford’s 3rd/4th down conversion rate was 56% again an awesome performance (our conversion rate was 5 of 13; 38% which is pedestrian at best).

Upfront we got man-handled…again. As Su’a said,”Déjà vu all over again. It’s like we reverted back to our old ways and Christian (McCaffery) made us pay for it. They just beat us, plain out. We can’t go back and say, if we could have made this play or that play, like we did in week 3. Hands down, they just beat us on both sides of the ball, on every level.” Ok there it is and I totally concur and commend Su’a’s straight-forward talk. Stanford ran the ball 51 times netting 13 first downs by the run. That my friends is a pounding and it showed up late in the 3rd and 4th quarters. Interestingly we won the TOP in the second half but were out controlled 21:08 minutes to 8:52 in the first half. The fact it was only 13-3 deficit was a testimony to a few big plays and Stanford penalties. Frankly I also have to throw specials in there too as sub-par performance consistent with the rest of the team. Stanford averaged 24 yards per kickoff return we managed just 16. We made 1 of 2 PAT’s Stanford of course was 2 out of 2. Both teams were 100% on FG conversions. All said not a pretty night for the Trojans.

So what’s next? Of course the obvious answer is Wisconsin in San Diego. But less obvious but more important is the coaching staff build out. Coach Helton gets credit for making the sweeping decision that is a prerequisite to getting this team on the championship path I’m more excited about that than just about anything right now. We have good talent but we need to build a LOS dominance team first. Recruit, teach and train. Win upfront every player, every play, every gap with discipline and aggressiveness. That is as much about Trojan football as anything. I feel badly for the guys that can’t or choose not to put the uniform on again. But as we look forward let’s go get it done starting in San Diego.

Kevin Bruce played linebacker for the Trojans from 1972-75 and was a member of two national title teams. He is now a member of the FWAA.