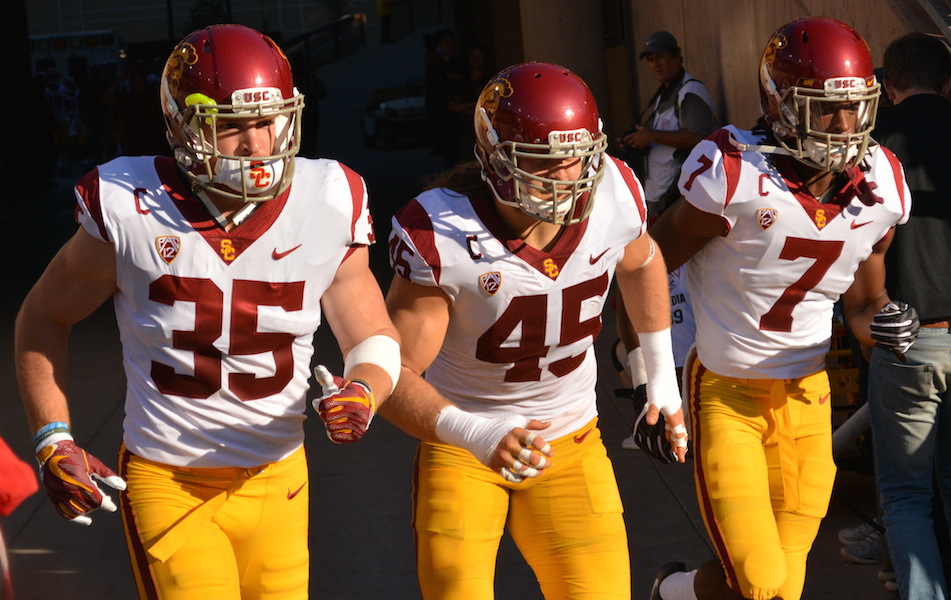 The temptation is to go into some sort of a mini-rant or such. Serves no earthly good and doesn’t help us understand just what the heck is going on out on the field. So that is what I’m going to focus upon. But I do believe it is time for some open, honest truth telling…as in straight talk. I’ll get to the defense in a moment, but first;

• Shaw made no attempt to hide the fact that he goes after us hard.
o We get “great athletes”
o He gets “great football players”
o He wants California recruits to know that Stanford owns us and last year was a fluke. He also wants the recruits to know he’s still the best coach in the Pac-12. Yesterday’s controlled stomp is the norm for Stanford vs. USC
• Stanford practiced in full pads on Wednesday…over a 2-hour practice I’m told
o Stanford had a full practice on Thursday – shells
o Stanford practiced on Friday helmets only
• SC were in shells on Wednesday
o Thursday light practice
o Friday a walk-thru…only
• If you play as you practice (you do), then who is more committed to winning? Toughness? Football IQ? Identity? [fill-in your favorite attribute here]
• We have many great athletes; but the football team is a serious work-in-process…again
• Coaching leadership is accomplishing exactly what it is willing to demand of the players …and each other.
• What we saw yesterday is why Shaw was voted Best Pac-12 coach last season. My goodness, they might make him commissioner (probably a great idea btw) now
• A Top 10 opponent on the road…forget about it. Until we start to practice like we mean it and increase the intensity level we will struggle.
• Coach Helton’s program is established. This is it, fresh legs and all. Results will vary.
• A 4th and 2 with 1:23 left in the first half. We were struggling and down 0-7. Keep it close and punt. And that’s not second guessing that just situational football vs. putting a somewhat shell-shocked JT Daniels in a situation that is fraught with peril. So results are; pass blocking evaporates, JT goes down, ball is fumbled from his dinged up right hand and the defense gets a short field to defend and can’t answer the call. Halftime score is now 0-14.
• Fink’s run package was the most energized the offense looked all game. Having Dedich (#99) in the backfield was energizing and Stanford looked dumbfounded when we ran that series.

Coach Pendergast put out everything he had in cupboard yesterday and then some. As I mentioned earlier in the week he did use both his ILBs (usually Smith & Houston) and lined them up in the A-gaps. Then one or both would move (stem) out of the gap into different areas and responsibilities. It caused some confusion along the O-line forcing a line call on the line of scrimmage. CP also threw in Rector and used him occasionally in a two-point stance with 2 or 3 other DLs. This is a run stopping alignment and was reasonably successful. Stanford was not ready for that look.

The 3, 4 and 5 DL look was pretty effective against the run but not attacking the passer. Costello had way too much time to throw. Secondary coverage was man, zone press and man back with different alignments including Cover 0, Cover 1 and Quarters (rarely used).

What Stanford was obviously ready and hoping for was the Fade and TE routes…and we weren’t. I know we practiced against these route packages but we really couldn’t stop them and also couldn’t get to Costello with no sacks and only three QB hurries. Our 3rd down coverage was frequently falling apart since at its most basic level, we rely upon a rush and disrupting the QB to make the man-type coverages more manageable. Limited pressure equals limited success.

Defensively there were some good things happening but against a Stanford team you just can’t have a couple plays off as that is when they kill you. Explosive plays and a few 3rd and long conversions then it’s another long drive or a red zone conversion.

Some shout outs to Tufele and Rector who both played a solid games and gave as much as he got. Tell had a physical game and I think he rung Love’s bell late in the game and was why Love went to the locker room. Nobody on defense backed down one bit (which I believe I saw from some players on our offense). This is a tough defensive group that just needs 1) start much faster and tougher 2) get some help from the offense 3) get their arms up if not able to pressure the QB 4) plant yourself slightly short of the first down line for pass coverage if nickel or LB in coverage.

Next up is Texas…need I say that they are very much looking forward to our visit.