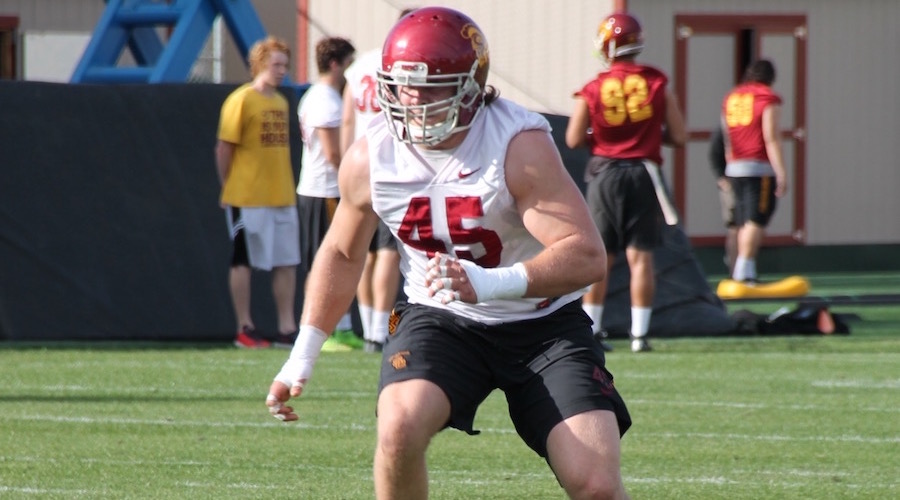 I was hopeful that we could answer some pressing and compelling questions about our 2016 defense. Given the over “controlled” nature of the Spring Game we will have to wait until fall and after the first couple of games to get a clearer picture of our team and defense. I am very concerned that Coach Helton cannot determine who the starting QB is after seeing Max Browne play now for his fourth spring practice. Frankly either he’s ready or he’s not. This part of the drama will play out now throughout summer and into Fall Camp. Are we going to be ready for Alabama? The defense clearly needs work but this type of Spring Game just doesn’t get it done for me. Frankly this practice was unserious and festive at the expense of using it as a game condition learning experience. I saw the sloppiness and “me-first” attitude displayed that just drives me crazy. As a warm up I watched portions of Ohio State, Michigan, Alabama, Georgia, LSU and others play a scrimmage. All those schools played in front of huge spring crowds in full game conditions and there was nothing unserious about what I saw from those teams. When I last checked Alabama is next on our schedule in Dallas so get ready…

As for the defensive aspect of the team some pieces of the puzzle were made a bit clearer for us.

Here are some of the questions I was looking to find answers:

Ok, I could’ve stopped sooner but I keep this list and others throughout the season and note how we progress. While the list of questions is not collectively exhaustive it does cover the waterfront pretty well so as to get a good read on our defense. So how did we do on Saturday?

I could draw almost very few conclusions from Saturday’s controlled scrimmage and practice. It certainly wasn’t a Spring Game which is just as well so as to reduce potential injuries. Maybe Coach Helton was going to employ this style of scrimmage anyway but when Kenny B. went down his injury had to enter Helton’s thinking. Btw for the record losing Kenny is a tough blow but others will just have to step up…period and no option. Yes this is a tall order but there it is. Since there is no NCAA free agency system to tap into this gives opportunities to others; but what a loss especially in this type of 5-2 with only two true DLs on most plays.

So what did we learn? This 5-2 has no NT and is clearly geared for an every down “one-gap” attacking defense based on speed, offensive line confusion, missed blocking assignments and multiple attack angles. Secondary coverage will be a fair amount of Cover One with safety flex, press zone and man-to-man (mostly off-man but with hard press man coverage as the season progresses…CP has done it this way before). I only saw an extremely vanilla package on Saturday so I am really extrapolating from my CP-1 write ups and notes from years ago.

A Clancy Pendergast defense is designed to disrupt but not necessarily dominate the LOS. It’s a distinction to note as we face physical OLs like Alabama, ND and Stanford. So on Saturday I looked for those signs in the play at the LOS. Because of the controlled nature very little truly full speed contact took place. There was the initial pop followed by closing fast to the ball form up but not crisp or full form tackling. That’s fine for the purpose of this Saturday’s practice but nobody is make the team or starting role with those rules in place. I did see a lot of athleticism, speed and mobility. I did see the offense essentially win the LOS battle…it’s what I would expect in a ¾ speed drill and the bigger guy will win more often since speed is neutralized and holding calls, illegal receiver downfield and offsides/motion penalties are not called. I did see Marshall moving more slowly than normal, get stiff-armed and is probably embarrassed about that. Frankly Biggie didn’t have a great day either learning or playing…a missed opportunity and something we’ve seen before. Leon McQuay too was dialed down as well so much so I had to check the roster numbers to make sure that was him.

Our play on defense along the LOS was basically to hold bags for the offense to punch. They did well at that but certainly you don’t want players to even get a whiff of not putting out 100% regardless of situation. Noah went after one play and I guess tweaked his back again…better get healthy because we are really low on DLs. Speaking of which how can we get to a point where we don’t have enough DLs running a 5-2 with only two DLs??!! To me it looks like we have more quality QBs than DLs by number. Did we miss out in the recruiting wars? The Des and LBs looked talented as far as I could tell but that really wasn’t a question I had. I do think that Gustin is in his natural position and that is a great thing as he is the disruptive force that we need along the LOS. But he can’t be the only one.

My highlight without question was seeing the smile on Jake Olson face after he snapped perfectly for a kick. That folks was worth watching and remembering. That is Trojan football.

I didn’t want this report to turn into some rant based on one data point and that a spring scrimmage/practice. It’s not like the season has started…or maybe it has.