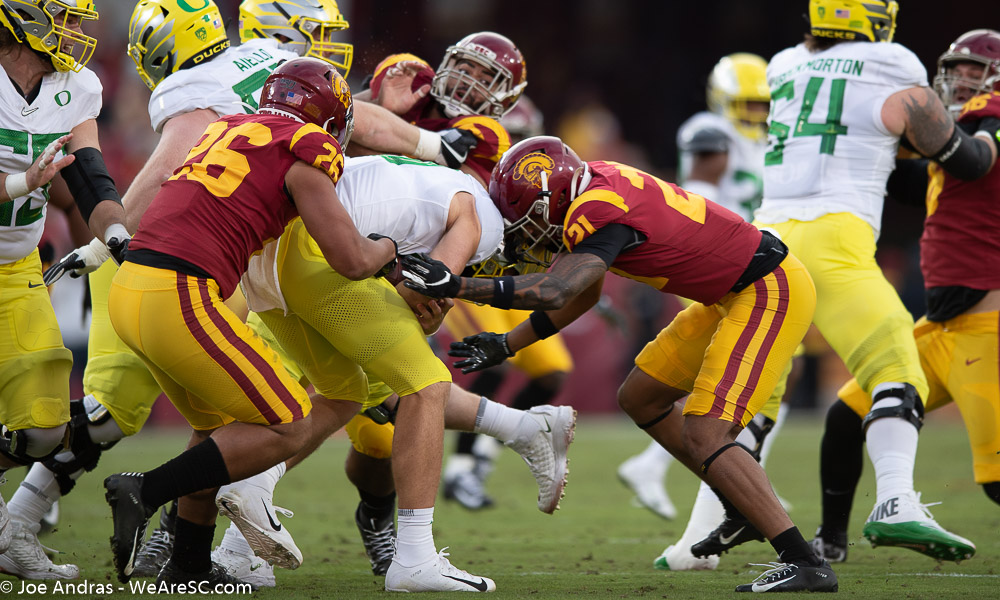 Last night’s Oregon vs. USC nationally televised game was surely a game for the age…the Helton Age. As my wonderful bride (who is a multi-degreed Trojan, btw) pointed out to me: “This is like watching the Night of the Walking Dead.”

The “Living Dead” would have been an upgrade. Frankly, not a bad description if you want to think about it. And I really don’t. As I have pointed out to a number of fans already, how we played last night and much of this wasted season is like watching some of the YouTube videos of baby seals getting clubbed to death. It’s grotesque, but you watch it anyway. Well, the score is Seals 24 and the fur-traders 56, which was actually merciful. Today’s column less about the defense, offense, special teams or related topics but it is clearly about the current Trojan football situation with some X’s and O’s thrown in because I still love Trojan football and want to share with you the full story.

Let’s start with Coach Helton’s prescription to remedy this utter and complete collapse of our Trojan football program, including recruiting, as we know it. Coach Helton said “I’m going to show up on Monday and work my butt off for the next one, that’s what coaches do, that’s what ball coaches are, and I’ll continue doing the only thing I know which is to fight. Thank you for that question.” Ok, here’s a question that comes to my mind, “Why are you and the team taking Sunday off?” Back in the eras when we won National Championships, we had time for Sunday church, then it was film study and critique, medical treatments as necessary and then a short practice. This was true for John MacKay, John Robinson (now part of Coach Orgeron of LSU fame’s advisory team now at LSU after getting the boot by Swann, btw) and Pete Carroll. I can’t speak to the Howard Jones era, but they could have been the toughest crowd of all.

Last night’s game was less about pure execution as it was about complete and ongoing failure of the current leadership establishing expectations, preparations and recruiting. If you look at the statistics your head will spin since the numbers are odd looking. As an example, the team with more first downs, 60% 3rd down conversion rate, one-third less penalties and significantly greater time-of-possession got run off the field 56-24. We were defeated on offense (pick six, three interceptions, red zone fumble lost, and inefficient red zone offense, special teams giving up a 100 yard kickoff return for a touchdown, a KO returner who can’t get to the 25 yard line, a special team’s coach that calls for a regular kickoff with 8 seconds to go in the first half, a defense that started well and then got ground into the ground giving up 42 of the total 56 points.

I could spend more time on analysis, but you still end up with an embarrassing home loss on national television 56-24. Helton and staff have created a recruiting disaster and ticket sales are plunging. I dunno…time for a change or do we like being baby seals?