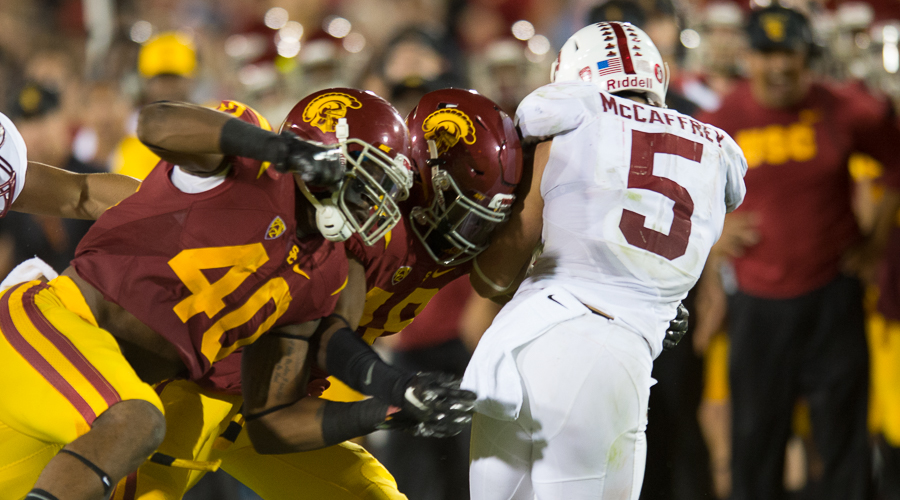 I am convinced that we’ve seen proof that alien abductions are fact! There is no way the team that played against Oregon is a USC Trojan football team. Not even close. So clearly then the most obvious answer is group alien abduction and our guys were substituted with all the 4-5 star recruits we never offered scholarships…or maybe something much worse. The worst case is that these are really our guys who have turned themselves into a ghostly shadow of real USC football. Right now the only Trojan that can pressure the QB or cover a receiver or even make a tackle is Traveler. The famous and lovable dog Turd from 1972 played tougher than this group. At least he know what was important and showed up ready to play.

This team and this program is in the most serious condition in decades and probably since the last two losing seasons under Coach Don Clark though I wasn’t around then so I’m guessing. I’ve ever seen it this bad…ever. In the past three season we’ve seen the most yards ever against a USC defense (657 yard vs. ASU), the most rushing yards ever allowed (452 yards vs. Boston College) and now the most ever touchdown passes allowed in a game (six and all by Vernon Adams/Oregon). We’ve been playing football since 1888 for those keeping track of these things. Plainly speaking this is scary bad weak-ass football with no real sign of toughness or fight to the end attitudes. I am flummoxed as to what’s going on. I can explain the X’s and O’s (and will), I can even explain the emotional roller coaster ride of this season and the weak coaching but what I can’t explain are players that get used to losing, take selfies with the opposing QB who just ripped them apart and just wander around like they’re in Disneyland instead of behind enemy lines. And this group is going to rally against UCLA for the Pac-12 Southern Championship? The Bruins are laughing their asses off right now and getting ready to apply the coup-de-grace and put us out of our misery. To which I say bullsh*t. Get me 11 guys willing to play every second of every down full out with bad intention and I’ll show you a team that can win. If necessary I would bench every player that didn’t grade out on effort and start somebody or anybody else. Play the players not the pretenders…maybe they’ll all learn.

The defense was the base 3-4 with a lot of nickel packages. Oftentimes we moved to the 2-4-5 nickle package and blitzed frequently predictably. We played cover three a lot with a tight zone with the three safeties and man up or man back on corners. Heyward said they played zone with “plaster” cover which is a tight zone that really looks like man coverage except it isn’t “man-through” or anywhere on field same man. Tucker had a nice night in horrible circumstances with nine tackles (2.5 TFL’s) and Green as part of the “Lengthy” line had five tackles. The stats are totally misleading but the scoreboard isn’t as it reflected the game well. One stat was interesting to me Oregon nine kickoffs five touchbacks; USC five kickoffs and no touchbacks…again. Kicking game is really another problem area regardless of kicker.

Here’s a classic quote from Coach Wilcox,”We obviously didn’t do a good enough job preparing them. We didn’t execute well enough to beat the team that Oregon is. I thought we would execute better in the pass game…We’re going to have to watch the tape to see exactly what it was, there was a couple busts that they took advantage of and there was a couple times where we got to finish better. So obviously, unacceptable and disappointing and we got to go fix it.” Here we go again…we’re going to go fix it. What have we’ve been doing before all season but trying to fix stuff that stays unfixed? If you don’t know how to fix it ask for help. Use different players and try for a different result…say maybe Uchenna Nwosu?? Tucker did well why not Nwosu too? He was ready. Wilcox is so concerned about getting the numbers right…screw it, attack and count the bodies later. Make something happen and quite thinking and start letting players play. Make some difficult decisions and replace ineffective players with others who have earned a shot. You got one week to get it right or as these guys like to say “we got to fix it” but you’re now out of time and out of work. Good news is at least we get a crack at UCLA but will the aliens drop off our real guys please!!

Kevin Bruce played linebacker from 1972-75 and was a member of two national title teams. He is now a member of the FWAA.