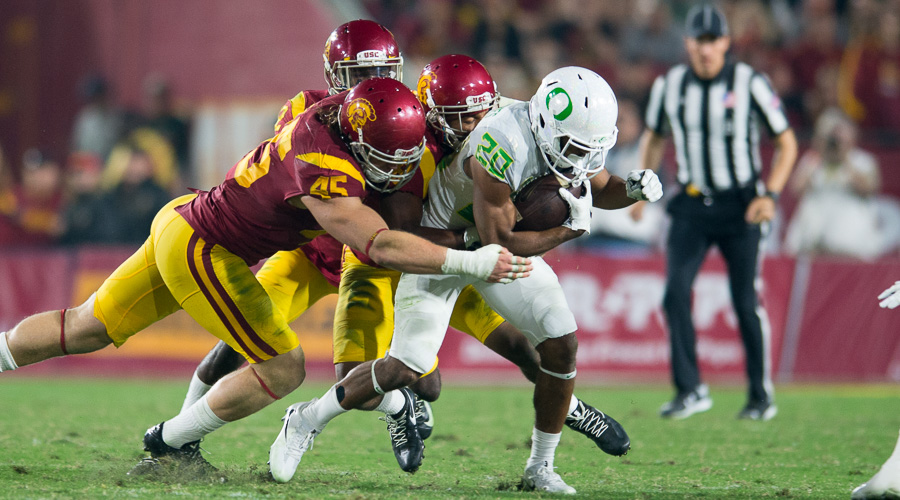 There is no doubt that Coach Pendergast’s defense is designed to handle the majority type offense in the Pac-12…namely the RPO (Read-Pass-Option) with the occasional spread formation combined with up-tempo. The last two weeks of outstanding defensive performances point to a well-designed defense set and scheme with excellent game day adjustments. The Cal game was a true defensive test of this scheme. Oregon despite their defensive woes can put up a lot of points in a hurry and can run the ball better than any Pac-12 team as far as yards per game and average yards per carry. What we did to Oregon yesterday was impressive…very impressive.

Let me point out some of the metrics of success and then talk about the X’s and O’s.

What I really appreciated was the excellent first down defense which set up longer than usual 3rd down conversion requirements. That in turn set up our third down defense that was more manageable. The base first down scheme was our standard 4-3 hybrid with a 50/50 mix of nickel and regular secondary on first down. Some of that nickel set on early downs was set up by Oregon’s up-tempo play and the difficulty of substituting easily. So you want your nickel back out there early just in case you have to toggle a safety into the box on those early downs to support the run defense and then transition to a pass on second down. It worked well. Well schemed, well coached and well executed.

Third and 4+ yards (which was about 2/3rds of the situations) CP went to a 4-3 odd front. That means Stevie T. (I really hope he’s ok btw) or others were lined up over the center. I can’t tell you how much I like that set against that situation. The blocking scheme is different than the even set used for first and second downs, it occupies the center who is the most vulnerable OL position and apt to mess a snap up when pressured (happened on a 3rd btw) and allows (wait for it…….) for a twist between OLB/DE and the 3 technique. That was what happened on one of the sacks and tears welled up in my eyes.

In the second half Oregon made some nice adjustments that took us a while to adjust to but ultimately we did…another good sign. The Ducks went to second and third down screening which was a very heads up change and we got burned by those early-on in the 3rd quarter. Also Oregon ran more waggles against Cam and Porter. A waggle play has been around since they starting putting air into the football. But it’s been around so long because it works. There are variations but Oregon’s version was usually without a pulling guard but did include the QB on a reverse pivot after a run fake then stretching out the pocket and flooding an area with two sometimes three receivers. This puts edge pressure on Porter (take the QB or drop off) and Cam has to get to the hot short receiver or take the TE who is behind him and crossing. If given time the QB should have an open receiver. Though infrequently the QB can make the difficult longer throw to a deeper receiver. One key to stopping these plays is back side pressure. Oregon usually did not pull their OL on their waggle plays since we usually keep personnel on the backside. Therefore we’re bringing some kind of pressure and Oregon keeps guards in. However the screening plays which by definition have OLs out in space. My guess is that Washington is looking at their version of waggle plays and will bring that package next Saturday in the first half. Ultimately we solved the “waggle” problem which included Porter making some really nice athletic plays.

So yesterday was a good day. Scheme, game planning and execution worked. While not a particularly physical game it was nicely done. But does this scheme and game plan apply to U-Dub? Most folks say no as Washington appears to be a power team. I don’t think they are a true power team but they are a much more physical offense. So this scheme (or a variant no doubt) is just fine for us which is a good thing. We all know that for now we don’t match up well against the power offenses yet. We will but that is as much personnel and recruiting as it is scheme. But Saturday was a nice job by CP and the defense.

Kevin Bruce played linebacker for USC from 1972-75 and was a part of two national title teams. He is now a member of the FWAA.