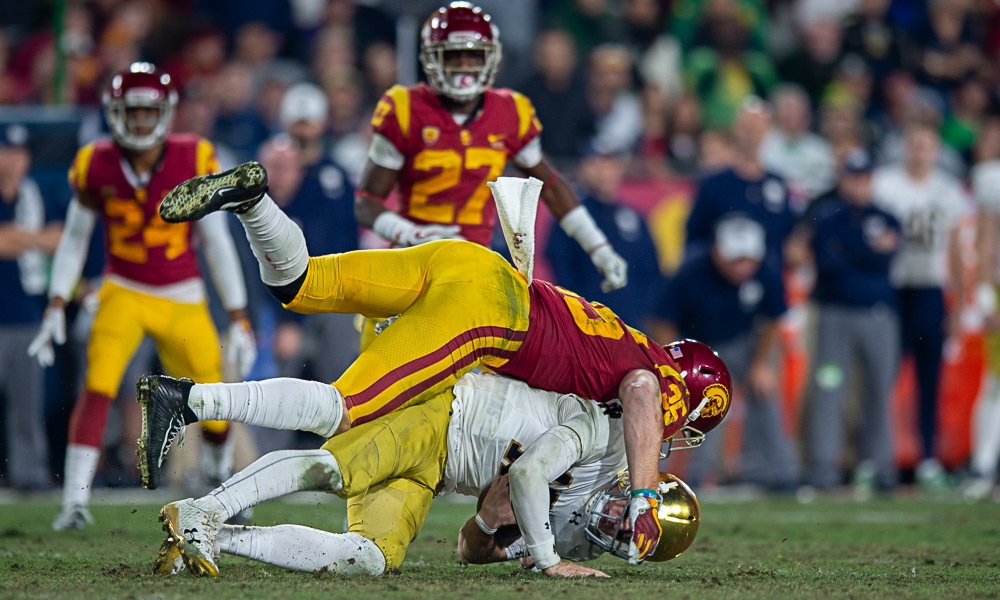 I’m first going to report out about the defensive performance from last night’s disappointment in Los Angeles despite the news, press releases and swirling reactions about the clear an unequivocal vote of confidence and strong commitment from Athletic Director Lynn Swann in support Clay Helton’s continuing role leading the USC football program as head football coach. I’ll add some comments later regarding the coaching situation, but first, the X’s & O’s.

• Honestly, this was a brilliant but risky defensive game plan
• Coach Pendergast (CP) dialed-up zone run pressure by forcing upfield gap pressure by the 3 or 4 DL’s combining that physical pressure with additional speed pressure from the safeties mostly coming from Chase Williams (who had an excellent game)
• The result generated 8 TFLs including 3 sacks
• CP “loaded the Box” by using DLs, LBs and bringing safety and occasional nickel back pressures
• Coverages were varied but boiled down to man/press on corner backs with an occasional man/ back with disguises away from Biggie
• We pressured the two A-gaps with EA and Cam multiple times without the consequences we had last week against UCLA and their break-away run
• DTs were fighting to get upfield along the LOS (I’ve been waiting all year for this physical play to emerge)
• DTs were supported by Safety Williams and LBs providing aggressive run support.
• Excellent game by Cam Smith who showed speed and lateral bursts we’ve not seen in a while
• Biggie had a great game especially in run support but also his coverage was excellent. His PI call was ridiculous. Mugging a defensive player is allowed I guess.
• A fun and enjoyable pick by freshman walk-on Jordan MacMillan…only our 4th pick of the season

• ND identified the weaknesses in this risky set up and exploited it. E.g. ND used Finke in the slot to isolate either the nickel or Cam Smith. We reacted by moving the nickle back to a tighter slot back alignment. ND countered by motioning the slot back thru creating isolation on the vacated weakside OL, Iosefa. Jordan pressures the QB and Smith now must cover the speedier running back in the flat. ND Produced three 1st downs using this adjustment. Cam has no chance to break up these plays but only run down the running back.
• Regarding ND’s Williams explosive 52-yard-long TD run, that was brilliant play preparation, call and execution. ND used two pulling O-linemen with TE plus an offside guard all crashing down inside. Then, add old school ND misdirection and that play still works especially against a tired and inexperienced part of the secondary. If we had jammed the A-gaps ND has to audible out of that call. No such luck. Touchdown ND

• Start the 2nd half with 27 plays resulting in five conservative punts plus toss in two first half fumbles.