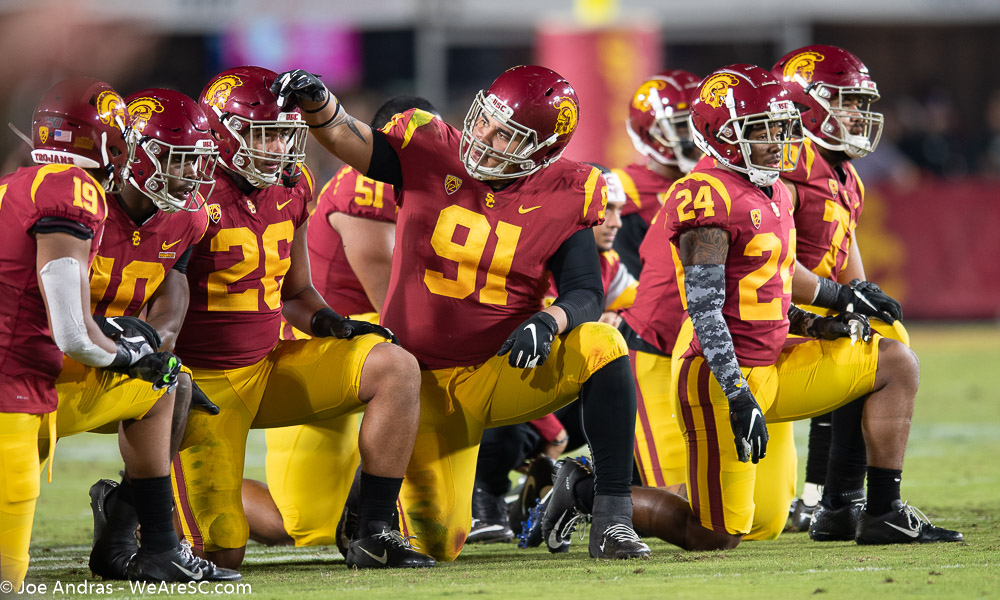 After reviewing hours of University of Texas defensive video I have a number of observations and thoughts. But the key question remains: Is this the best base defense for our personnel in light of our upcoming 2020 season? Good question, so let’s take a look.

The above graphic shows the most fundamental 3-4 look against a vanilla offensive set. While we just don’t see this offensive set much anymore, it is helpful in defining the basics of a 3-4 base set defense. Later on, we’ll jump into more about how 3-4 (or a 3-3-5) looks in application.

For now, don’t worry about the two safeties. Btw, the 3-3-5 is just a 3-4 with an additional pass coverage personnel, usually a nickel type back. The first and most obvious element to note is that there are three true defensive linemen (DLs) which includes a 0-technique nose tackle (NT). All that Zero (0-technique) means is that the NT lines up over the offensive center with no shading to one side or another. He may be responsible for both A-gaps (called a 2-gap 3-4) or just one A-gap with Mike LB responsible for the other A-gap. More later on these differences. The corner backs (CBs) are shown in a simple heads-up press alignment.

While at the University of Texas, the kind of defense Defensive Coordinator Orlando utilized was a 3-4 with 3-3-5 depending on personnel and opponent. I think the below look will help at least understand how our defense might change under Orlando.

UT’s base defense (which worked so well against us in 2018 with 10.5 TFLs and 3 shutout quarters, btw) looks like this:

Against our one back & one TE formation (11 set), UT shows a classic college football 3-4. Note that the nose tackle is in a 0+ technique (with a slight shading to the strong side of the offensive center) and the defensive tackles are in 5+ and 3 techniques respectively. The Strong safety is on the hash (top of picture) supporting run while the free safety is deep reading the inside flex receiver on the hash mark. This offensive formation is prevalent in the Pac-12 and other conferences as well. My key question; is the NT in a one-gap or a two-gap mode? The answer turns out to be a one gap for this play (you can’t tell by looking, you have to watch the play).

Most of UT’s approach under Orlando was two-gap, except on certain passing downs and situations when a true NT one-gap was used. However, He also used a loop technique with the NT where he would loop the 0-tech into the B or C gaps. This looping by the NT helped confuse upfront blocking assignments and opened up effective edge pressure by an OLB or even a nickel/safety. Let’s move on…

The play call is a fake fly-sweep with Carr (#7) slip screen to the right. Not a bad call as UT pressured all night. The play was blown up badly, principally due to poor backside blocking and fast linebacker pursuit/penetration. I have to point out that our offensive alignment and gaps are sloppy and inconsistent. However, UT’s defensive alignment is a true 0-tech NT, 5i (maybe 4+) to the right of the picture and 3+ to left of the three DLs.

By looking at the eyes and head placement, I can surmise that the OLB on the left side of the picture is looking inside at #21 in motion, strong safety is reading thru the offensive center to QB and then to RB (Carr), free safety (deep) is reading motion and the vacated trips (triple) formation. Frankly, UT is focused on penetration from the seven players in the box. While there some is alignment confusion at the trips area by Texas, they successfully defended the play. From a USC perspective, this should have been a running play to the inside right side. UT pressured correctly and was successful on this play and ultimately the game.

As for goal line, UT under Orlando uses a number of alignments as you would expect. For example, in the below picture the offense is in a running formation on 4th and goal. Texas is saying “my NT will defeat your center/guard combo” so they therefore loaded more personnel off the tackle positions on both sides. Ironically, our QB is under center and yes, there is a fullback in the backfield. However, this was a pitch play to the right and three UT defenders ran Carr out of bounds. UT played the red-zone very well.

So what does it all mean for our base set this coming Spring Ball and 2020 season? From my perspective we have the personnel to make a 3-4 or 3-3-5 work. There are some key questions to ask however, including:

As you expect, there are a lot of open questions. We will get a better idea in spring practice regarding these questions, but my educated guess is that a lot of the answers will emerge in August before the Alabama game. I fully expect that there will be necessary adjustments to make after that game. An opener always forces that but an opener against will demand adjustments. A three DL set against Alabama is just plain asking for a physical and athletic test of wills.