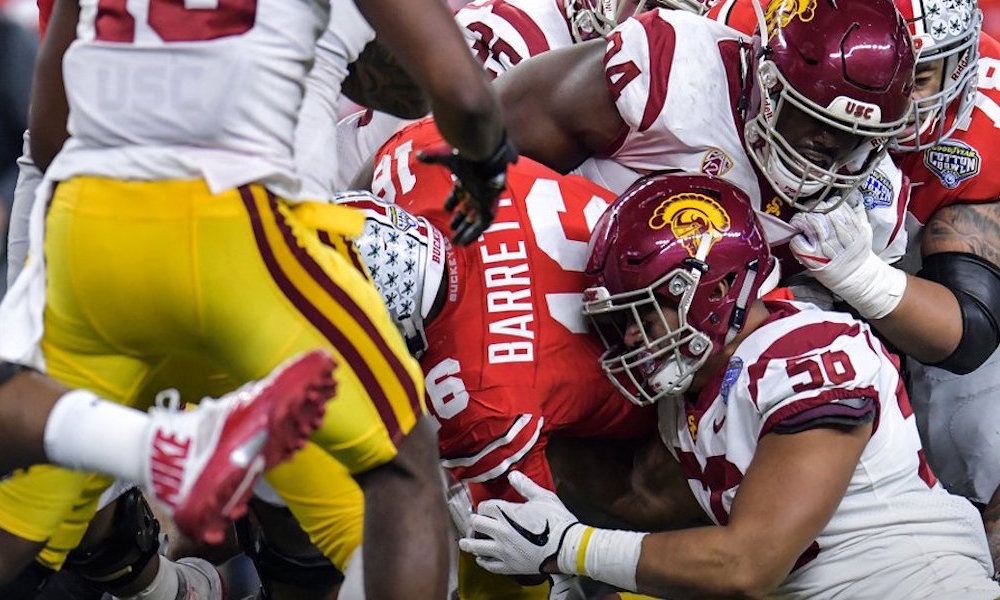 The game against Ohio State showcased our best defensive preparation and performance this season against what was easily the toughest and most balanced opponent we’ve faced. So if the offense and the kickoff return units had gotten off the bus and showed up for the game then we had a pretty good chance putting up a “W”. Regrettably, the game turned out as many of us feared…tOSU defense tearing up our OL and TE blockers, neutralizing Rojo, pressuring Sam, lots of confusing underneath coverage which would produce multiple turnovers.

Also, I was disappointed that our kickoff return unit’s consistently poor performance producing lousy field position and all the while not adjusting to Ohio State’s corner kick position and overload coverage. Btw, the KO return unit’s blocking was abysmal…similar to the OL/TE performance.

So with that in the rearview mirror, I did see some encouraging defensive developments during the Cotton Bowl game that are worth sharing:

1. Great preparation and pre-snap reads by our defense. You could see guys communicating with each other regarding tendency, calls and checks. We didn’t bother to disguise our communication but just make the calls and play. It worked pretty well. Btw, State did the same thing and then some against our offense but more about that later.

2. Defense held Ohio State to 277 total offensive yardage and 17 points (offense only). Admittedly the second half quickly migrated to quite conservative play calling by tOSU but nonetheless the defense showed no quit in them and played physically the entire game.

3. Kudos to John Houston. He played well and has improved more than any player on the defense (probably the entire team). His November and December performances contrasted to September and October are night and day. He showed the range that Clancy wants and improved his interior play. I hope he beefs up so he can take on the big uglies next season more effectively but he’s getting it now and CP is deploying him better. As an example, when in the dime package, CP put Houston at Mike and moved Cam Smith over on the edge. Pretty darn interesting move and not a look we’ve shown before personnel-wise. That means that Houston had Barrett if he broke the pocket. Results were good and caused some confusion for Ohio State and the matches they were scheming to get.

4. Nice tackling by Biggie. He is very effective against the run and perimeter throws. Deeper balls are another matter.

5. CP also used Nwosu as a Mike backer in a modified 3-3-5 look. It’s modified as there is no true NT in play so it’s an even alignment (nobody over the center) but something we’ve not shown this year. It worked again and his blitz result on its first use was a sack #1 on Barrett. CP was ready with a good game plan as the Defensive Coordinator should.

6. I liked the sparkiness we showed when Darnold was hit late out of bounds. Not much of a late hit but we got the call and the bench started to mix it up with Ohio State players. Call me old fashioned but you never ever let our QB recieve a cheap shot and not respond forcefully and immediately.

CP clearly had the defense ready to play and had well scouted Ohio State. He arrived with a nice game plan that the defense could execute. Not perfect but with the sudden changes and short field the defense had a lot to deal with. The defense was reasonably efficient holding Ohio State to just 55 plays, 13 total first downs, 2 of 12 (17%) 3rd down conversions (impressive) and only two red zone opportunities (both were converted unfortunately). What I really liked was the toughness that the defense showed all game and there was no quit in that unit even with small DBs taking on big uglies all night out of our nickel and dime sets.

Now with regards to the pick six by Darnold. This is classic lousy coaching, game planning and of course QB and slot back execution. I’ve not written about this before so as to not give opponents any heads up but we’ve been running an RPO look with running back to the 3 receiver side all season. If Deontay is in the slot the ball is going to him on an inside slant…period. Apparently, we don’t scout ourselves or more likely we just run the play anyway. Ohio State was calling the look from the sideline! The DB waited pre-snap to not give away his move to cut the route off. Sam just throws the ball anyway, Deontay doesn’t flatten out and it’s a pick six dagger in the heart.

For the night, we gave up four turnovers (three by Darnold; two fumbles with poor ball security and a pick six). If tOSU doesn’t muff our punt we would have been shut out. As it was the offense scored zero points while racking up 23 first downs, 413 yards (net of 8 sacks btw), 34:56 TOP, 6 of 19 3rd conversions and 2 of 3 4th down conversions. Our red zone woes continued with 1 out 4 conversions and that after the muffed punt by tOSU. Wow, pretty anemic and I had to clean that language up. As one of my most respected football colleague put it “we produce a lot of empty calories on offense and have done that all season.” Yup, no argument and our pitiful red zone performance underscores the ineffective offensive game planning, blocking and execution. Think about this with all the gaudy offensive numbers we put up this season, our touchdown red zone conversions were only 34 out of 59 attempts. Get this, our total red zone offensive performance puts us 121st out of 130 DI-A teams. Are you kidding me??

So, this season is now in the books. I think most of us agree that it was a season of unfulfilled promise and talent. Now comes the inevitable attrition of seniors rolling off and underclassmen declaring for the NFL. As of now Defensively Speaking is hoping that the guts of the defense upperclassmen stay for one more season (Smith, Green, Biggie and Tell). If we lose these some or all of these players we then have a young unproven team on both sides of the ball and who ever knows what happens with special teams.