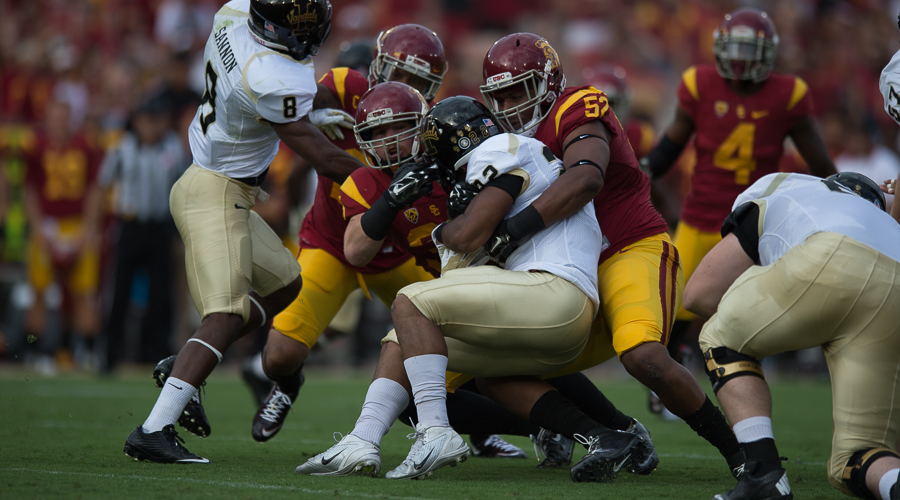 Another “W” and another ugly team performance with moments of great plays, crucial blocked field goal and lots of breakdowns in assignments and results. Of the team components I would rank from best to worst as follows: defense, offense, specials and coaching with all rankings bunched up pretty close to each other. I have to believe that this coaching staff and even some of the players know they got away with one Friday night but not without a pretty steep price in injuries. So tell me do any of you think we’re ready for Oregon and Eugene? Ok then we got this week to get ready for a “yuge” game. The table is set and we play with the guys we have available.

We played two basic fronts similar to what we played against Arizona but with lots more blitzes and slants. We moved from our base 3-4 Hybrid with odd man front to a 2-5-4 even front (sometimes it was a 2-4-5 with a nickel package) routinely. The general pattern was 3-4 on first down and 2-5 on second down depending on short yardage or not. Third downs were interesting as this is often when Wilcox called for various pressure blitzes especially after Sefo Liufau got injured at the end of Q1. Our secondary coverages was complex…well actually it was confused with more blown assignments than I thought possible and still win. The confusion was driven off a well prepared Colorado team versus our defense that blitzed 5 or 6 players often driving different coverage assignments than we were prepared to execute. That’s fully on the coaching staff. More later on this topic. What clearly worked was 1) run stop 59 net rushing (versus our 129 yds.) 2) six sacks and 3) ten TFL’s 4) holding the ‘Buffs to a 40% 3rd/4th down conversion rate and 5) total offense of only 281 yards. What was not impressive was our red zone defense (have to include the 4th quarter 2 yard drive by Colorado which was another lousy punt followed by similar coverage with a personal foul by our punter). We gave up 3 out of 4 touchdowns but thankfully only 1 out of 2 field goals. Colorado clearly won the TOP battle in the 4th quarter 9:48 to our 5:12 but Delvon Simmons had a tremendous night with his blocked field goal, one sack, two TFL’s and a forced fumble…pretty timely and needful.

Last week I pointed out how Biggie Marshall gave up inside leverage and got schooled and then embarrassed. He had a much better game this week but AJ clearly didn’t spend much time spooling up for the defensive part of his game. This week he gave up clear inside leverage in the red zone with no safety on the inside at all just an ILB (Cam Smith). You absolutely can’t give up inside leverage in that situation…it’s obvious yet he did and the results were predictable unless we pressure or sack the QB which we didn’t. Later on in a critical 3rd down situation he bit on a double move from Spruce (an out-n-up) and a RS freshman QB laid a perfect pass over his head but in front of the safety. Right now I think Jackson is trying to do too much as his kick returns are suffering as is his defense. Our secondary played a lot of man CB with multiple safety and/or nickel back package off blitzes. What was wide open often was wide side of the field with a RB or motion back in the flat. When we blitzed it often is from wherever Su’a was positioned and Colorado knew that and called “see me” plays and/or audibles based on Su’a and his actions. One continuing glaring mistake in technique is we routinely let pass receivers and backs free to run routes as we run past them on a blitz or move to a pass responsibility. If we continue to bring 5 or 6 guys and not mess up the patterns and timing it is very difficult to expect an ILB or safety to cover 20 yards or more after giving up position. AT that point I just want the tackle made and take that as the best we can do. I would like to see Su’a wave off his blitz on occasion and peel off after the RB or receiver in a man look forcing the QB to read, react and decide on a delicate throw, tuck it or run or look for his bail out receiver. I really enjoyed seeing Plattenburg flatten (nice alliteration!) the QB on a nickel package corner blitz. That was a great call and execution with Su’a taking the inside move and Plattenburg taking the outside…excellent and something Oregon is going to have to game plan now.

Some other observations I had include the fact we don’t get off the ball very fast. I noticed that last week and it continues. Woods gets gassed and he really just moves to the center or guard and gets “chesty” with them. The other DL’s need to spy the ball and rip it when it moves and get the penetration needed to disrupt. Also when the “lengthy” line is in (Green, Bigelow and Jefferson) get your hands up on pass plays…these guys have the potential of being very good as a unit and are playing better. That’s true for all the DL and hats off to working hard and getting better.

For this week’s game the inside LB’s will have to get it going…and they can. We know Sarao can play plenty of downs and is tough between the tackles though not as much a pass cover or sideline guy as Smith. Tucker, Powell and Hutchings will need to game up but have more than sufficient motivation. My hope is that the defensive gameplan will allow them to play quick decisive football not overly complex read-n-react set ups. If in doubt knock somebody down someone once told me (Coach Goux btw). Finally congrats to Langley for a pretty good outing for a freshman CB.

So now that the balance of the Pac-12 has cooperated we now well and truly control our destiny. Perfect…now it’s time to Fight On!