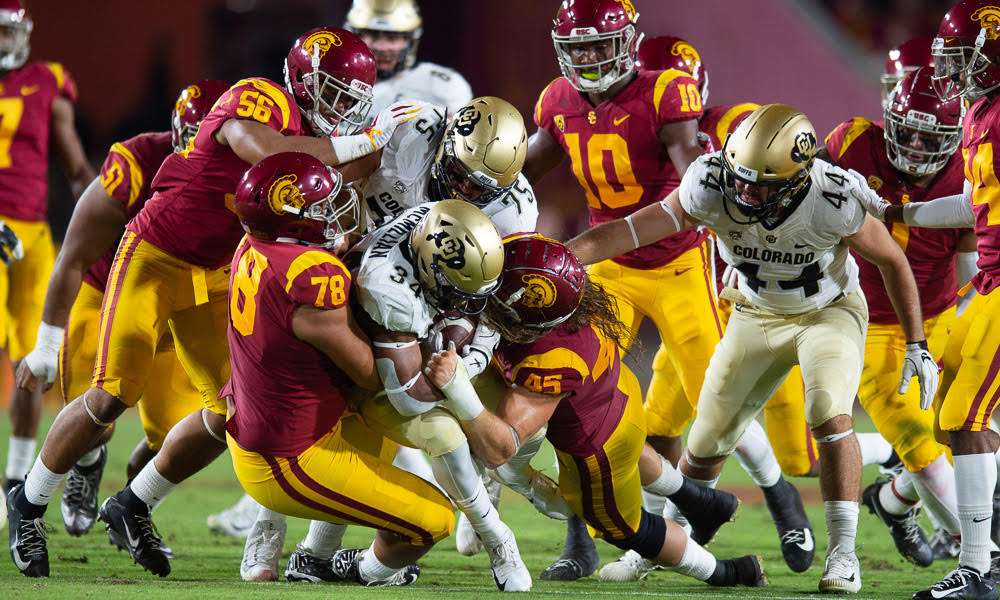 It was pretty obvious that the defense couldn’t have picked a better time to show up than last night. Without such a stout defensive performance with 16 TFLs, sure tackling and a pick six (only our second pick of the season which equals JT’s first quarter), this would have been a big Loss in the won/loss column.

It was ironic, but with the defensive game plan designed to stop Shenault (a very good idea) when he left the game late, Colorado came up with an answer we had a tough time adjusting to. That’s when Montez used his legs with some critical runs, the replacement back Evans (3rd string btw) was effective for grinding out first downs and ultimately Colorado manufactured two TD’s.

There was also a battle of attrition taking place as well with both Colorado’s offense and our defense. There was very hard-hitting game (at least SC Defense vs. Colorado Offense) going on which was frankly the first time I’ve seen that from us in a long while. The defense (all 11 players on the field) knew what they planned to do for most of the game with a few exceptions, which I’ll get to later.

The basic strategy was to find Shenault and smother him with both underneath attention and a safety or cornerback on a spy mission. This is over-simplistic but good enough for now. Colorado is not a deep ball team and prefers formation mis-matches to get #2 open and with the ball. Makes sense.
To counter, we decided to commit to attacking the LOS for the first time this season with our four DTs & DE/OLBs. Also, Clancy used a lot of different set personnel packages depending on down and distance. Smart, and the “youngsters” really responded well as they were very much part of the game plane even if Cam Smith could have been on the field. As an example, the defense put up 16 TFLs…impressive. But it’s names that really stand out; Gaoteote-2.0, Harris-2.0, Gustin-2.5, Peters-2.0, Marshall-1.0, Mauga-1.0, Iosefa-1.0, Jones-1.0, Tufele-1.0, Dorton-0.5, Jimmons-1.0 (to get 16 TFLs there is 1.0 for team). A lot of new names, not a lot of interior DTs as usual (no criticism, that’s the design) and the impact players were spread around the defense. Note that Tell had no TFLs because he became our last line defense if a play gets to second level.

Ok, what happened on the 49-yard TD run by Shenault? That’s on a freshman first-time starting MLB but also on Tell and the sideline. We should have called timeout, period. You hate to burn a timeout while on defense but this was the time to do so (and btw, we didn’t use all of our first have TOs anyway). There was confusion with guys not just “misaligned” but on the wrong side of the center. Colorado had four guys blocking three and physical mis-matches too. Yikes!

Secondary coverage was actually pretty routine with 1) Quarters (4 secondary covering one-quarter of the field in a zone like coverage) 2) cloud with Biggie up in press coverage 3) cover One with single safety high (Tell) and 4) variations including a couple of Cover 7 and Cover 8 each. Utah has a lot to think about when game planning our defense. But then so do we…

The Time of Possession battle was a huge negative for the defense. Colorado ran 84 plays…that’s crazy and many were in the 4th quarter. Colorado had the ball 34:51 minutes and we had it 25:09 resulting in defending 84 plays vs. our 61. Honestly, are you kidding me?? This is why the game turned into an attrition battle because we had a few more players deep in the charts who were better prepared (on defense) and more athletic. Some of the minutes these 2nd and 3rd teamers played in earlier games paid off.

Things that drove me crazy…

• Especially #70 holding the same guy, the same way two different times but the exact same play call. #70’s penalty count last year was 18 or 19 depending on who you talk to who keep track of these things. Hurting himself and the team.
• Taunting by Biggie…lead to Colorado’s 3rd score
• PI by Biggie…this is costing him and the team

• Can’t run on offense…makes life really difficult for a freshman QB
• Wait until Utah and ND and no run game. That will absolutely kill us and maybe JT too. This is not about fixing, it’s about doing!
• O-Line have to move their feet and get to 2nd level. Power blocking is essential and at least pull some people and isolation block a gap. For goodness sake don’t run the dreaded stretch play to #70’s side of the LOS.

4. Weak pass blocking by running backs
• If you want to laugh or cry, watch some iso’s with our backs trying to pass block.

5. Kickoff out-of-bounds
• KO’s have been a strength but the one unforced error is like a holding penalty

This week will be a medical week as much as anything for the defense. My guess is Gaoteote will not be available (btw, I loved his low tackling of the runners legs, that is excellent technique), Gustin is questionable (very), Pili & Griffin with shoulders questionable. The lessons from this week should remain:

1. Attack the LOS
2. Sure tackling really works and is fun!