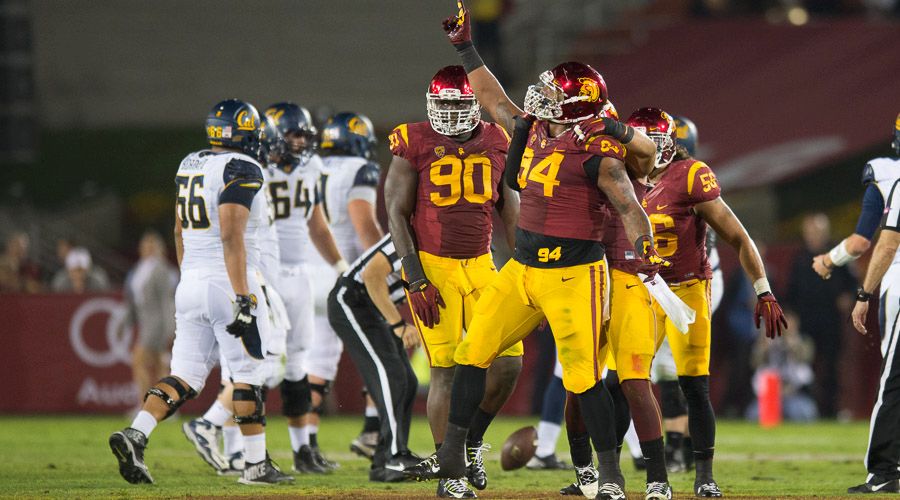 For much of the first half I was thrilled with the defensive performance utilizing our standard scheme but turbo-charged by great DL play that dictated the game. Boy did that change as the second quarter came to a close with Cal scoring easily in the Red Zone and the second half was generally messy and replete with “control the big play; keep it in front of you; bend don’t break” which led to 21 Cal points and more easy Red Zone scoring. We all saw the awful penalty situation with three TD’s wiped out and a fumble recovery. I just am amazed watching two teams compile 25 penalties with scores and turnovers being negated. I’m no fan of Pac-12 officiating and some of those calls (on both teams) seemed ticky-tacky but this was a chippy game with a tremendous amount of sloppiness in details.

Now in the spirit of fairness our defense played with great energy and enthusiasm during most of the first half and to open the second half (first Cal possession). The DL played the best they have all season for about maybe two-thirds of the game. So props to the unit for that part of their results. But the fall off for that last one-third was troubling. I think most of the folks on this board were thinking what I was thinking,”Hundley is going to kill us again if we play like this”.

Nothing new here with our base 4-3 hybrid though we added some additional blitzes (three by my count) with Pullard or Su’a. I saw no corner or safety blitzes as per usual. We also used Townsend in a two-point stance on two occasions with limited success. All else was as before but with a much higher energy level especially during most of the first half. I didn’t see a lot of line stunts though there were a few twists and limited slanting.

Our secondary coverage in the first half was more tight man on the corners with underneath coverage by Pullard and Sarao (they also had man on the RB to their side) with one deep safety or sometimes “halves” or two deep safeties. With two deep our one corner backed off (usually the weak side but in a man coverage or zone up)…btw Adoree doesn’t back off he just plays deeper sometimes to sucker the QB and he played a wonderful game.

It is interesting to note that Cal ran 79 plays (compared to our 77 plays) with 31 rush attempts and 29 of 48 passing…no interceptions btw. We got one nice fumble recovery and should have had two but was negated by penalty (hands to the helmet). Btw we ran 48 offensive plays in the first half compared to 29 in the second half. Defensive fatigue was a real factor as Cal got a bit quicker and we were now a half step slower which allowed for some completions. Also since Cal ran the ball better second half that causes some additional fatigue. No excuses just facts and we have to find a way to win and close the deal out regardless of fatigue, depth or any other issues. It just doesn’t get any easier…

The defense did hold Cal well below their season averages in both yardage, points and passing efficiency. This is a nice job overall with improved tackling but the performance was choppy and we didn’t finish well again which is a huge concern with UCLA and ND coming up. Both UCLA and ND are for real teams with good running games and excellent quarterbacking with escapability…an obvious nemesis and issue for us.

Our 3rd/4th down defensive effectiveness was an excellent 38% but like many stats this is somewhat misleading. Our 3rd down defense was an excellent 3 of 15 but 4th down was horrible at 5 of 6. Which leads me to the Red Zone. This was a really, really lousy performance in the Red Zone and bothered me the most. Cal scored easily from 5 yards, 6 yards and 5 yards again with the fourth and last TD from 29 yards out. Honestly when looking at our defense we are predictable “vanilla” 4-3 hybrid with the occasional 3-4 Cover 8 prevent defense (which doesn’t prevent much regrettably). If somebody is going to score on us make them pay for it.

Ok, we’re all thinking the same thing…can this defense stop UCLA and then ND? To be successful Wilcox needs more explosive plays on defense. This is where Sark/Wilcox are making a huge mistake. Sark is an offensive coach (meaning a coach of the offense not “offensive” personally just to be clear!). He wants to create explosive plays on offense and minimize the same on defense. Wrong theory! You create explosive plays on both sides of the LOS while going after the football (defense) or protecting it (offense). The “safe” strategy is the wrong strategy and we don’t seem to get it. Earlier this week Sark said,”We have a really good front seven, we take pride in our front four and what we can do. We also understand that we have some youth in the secondary that we need to take care of those guys to make sure we are minimizing the big play and defend the pass extremely well. Even though we haven’t blitzed as much, our run numbers have been fantastic, our ability to defend the run has been great, we haven’t had to devote an extra defender to the box, which in turn has helped us in our pass coverage.” This is a statement of somebody who knows offense and has outsourced defensive coaching.

This defensive brain trust needs to make some key gutsy play calls to energize the guys, create TFLs and turnovers and cause the opponents to practice for more variations thereby diluting their attention to our base 4-3 hybrid. Call this an aggressive creative approach to defense which all the great ones have in common. I also know our roster is thin and we are missing talent in a few positions which limit our explosiveness (I don’t use names of players in this category out of respect for them). All said we get the great opportunity to play two good football teams that we really dislike in the extreme…how great is that!! I hope Wilcox knows that these aren’t just rivalries they are defining games.

Kevin Bruce played linebacker at USC from 1972-75 and was a part of two national title teams.