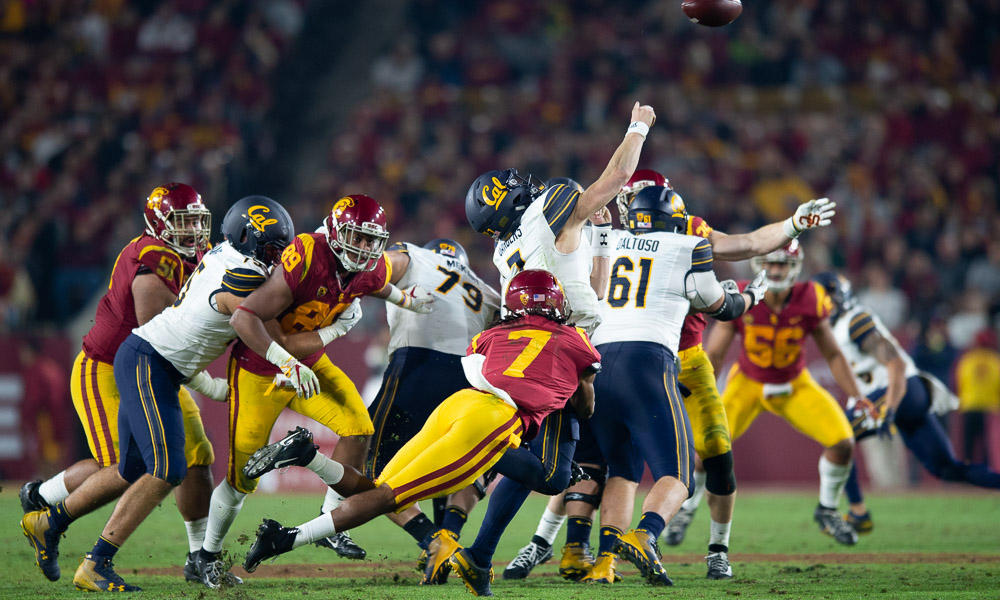 Well that is certainly one way to get national media attention, put on a display of an embarrassing 2nd in a row home loss to an unranked but better opponent that we haven’t lost to in 13 years and 18 years at the Coliseum. Coach Helton is sure racking up the superlatives right now as the national media have added their long knives to a growing population. Nice man but ineffective as head coach or program leader. And btw, Congratulations to Coach Wilcox on a signature win and an excellent turnaround of the Cal program. I thought Wilcox’s tenure as DC with us was suboptimal. I guess his better role is as head coach and he proved it last night on the road…Helton not so much.

Nice guys finish last as the saying goes and are we ever testing that adage or what? USC football this season is a train wreck and no amount of sugar coating it changes a frank and honest assessment.

Scheme
• 2-5-2 variant
• Rector at OL/DE hybrid – good inside pressure but liability on containment & zone read/RPOs
• Injuries are part of the game – stupid penalties don’t have to be (#8 & #8)
• Coverages were typical Cloud with Two high, single high, nickel with press, Biggie on man-thru (twice)
• Houston’s best game – Smith slowed down with hamstring

After a month working overseas with now full game live coverage or even replays. I had the chance to contrast to a month ago. There are discernible signs of meaningful improvement. Trojan football is not restored to prior prominence…achieving a .500 football record is now a significant accomplishment and our new Gold Standard. Great programs don’t descend to this level of play. I never thought I would see this day in my lifetime.