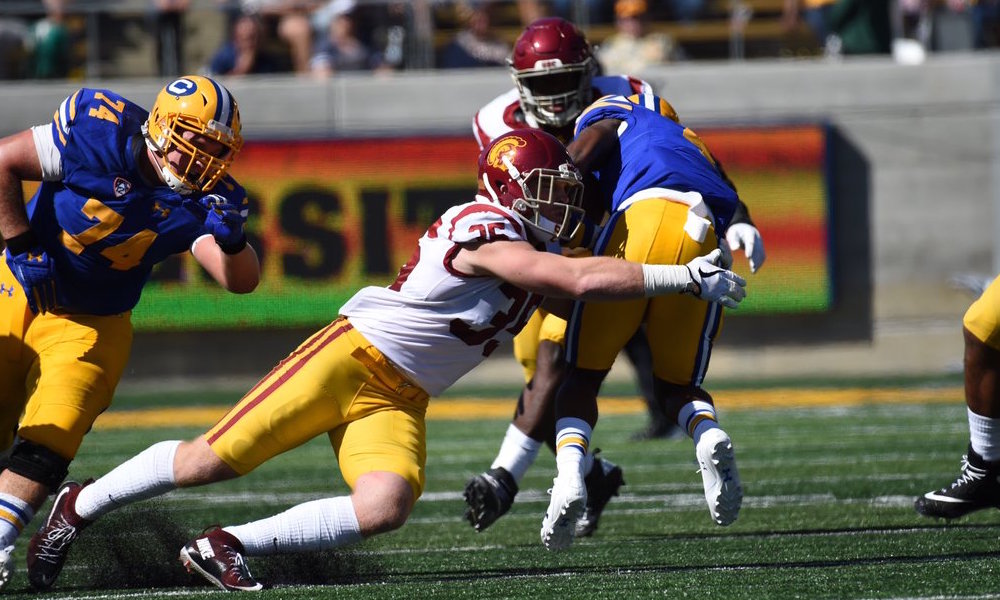 Welcome back to Trojan football when we are the hunted not just the hunters. Yesterday’s game was a tough game and that wasn’t a surprise. What frankly surprised me was the question of “Where was this edition of Coach Wilcox when he was DC at USC??”. No real answer to that question but interesting to wonder about. But with regard to the Cal game yesterday, we saw an emerging pattern that reflects our being the hunted now. We get the best effort of the season by the opponent with a “nothing to lose” mentality allowing them to throw the entire play book at us, ignore 4th down conventions (like punting and field position) and just keep the pressure at the maximum level. Championship teams overcome those all-out efforts and find a way to win. We did, I’m grateful…and concerned. Let’s get into the X’s and O’s as yesterday was a fascinating full-body contact chess match.

The first half was Cal’s best half of football of this game. As it turns out, this result was a clear win for our defense. Cal’s pattern all season has been to crank it up in the second half and pull away from their opponents and get the win…remember they were also 3-0 coming into this game against some quality opponents. We reversed that trend, made some excellent halftime adjustments and played much tougher and better defense in the second half. That second half performance included four turnovers gained in the crucial fourth quarter (total of six for the game btw). In my view, it took all of those takeaways to secure this win when, let’s face it, the offense is in a slump.

So, I guess in the first half our offense really didn’t get off the bus right away but the defense did. We showed what is a pretty traditional four DL set (that includes our OLB’s who now play more like DE’s). Some of this is dictated by available personnel such as Christian Rector (btw, are we not seriously thrilled that he showed up for this defense??!!) who is much more of a five or three-technique (inside DL). He will have a tougher time in a two-point stance if asked to play a true OLB…so don’t do that and Clancy didn’t. But for yesterday, it was essential that our four DL’s get upfield and pressure the QB and/or disrupt the running lanes. An ok (just ok) job in first half but a much, much better performance in second half. Why? The answer is straightforward to my view, Coach Clancy Pendergast made an excellent halftime adjustment which allowed for a different look and set the hounds loose.

I’ll tell you about the adjustment but first let me level set the baseline defense that we saw in the first half. We started the game with our “Rector-based” four DL’s (Nwosu is an DE/OLB but splitting hairs here) combined with Cam Smith (Mike linebacker) and John Houston (at Will linebacker spot) with 5 DB’s except for a few short yardage plays. For some of those short yardage plays I saw Iosefa come in and Yikili Ross leave. Makes sense as does taking Houston out and putting Iosefa in on first down. Houston is improving but is getting bounced around in the box like a pinball. Our secondary coverage was zone cover (sometimes a man/up but almost the same thing) to the strong side and a man look to the weak side. Combined with a strong and free safety and a nickel back (Ross) on the slot or TE with outside-in coverage (also taking a quick peek at the WR on his side btw). The result was pretty good run defense throughout the game excluding the 4th down conversions which were a serious shortcoming.

The second half adjustment was a shift to a six DB look with Matt Lopes as an additional safety. This was the first time this season we showed that look which is something for Washington State to consider as well. This change combined with an all-out four-man rush with an occasional ILB blitz gave the Cal QB fits. By fourth quarter he got very frustrated and forced some throws which was good for us and bad for them. Cal did attack our perimeter with some success but the inside run game they gave up on which was probably not a great decision with a six DB set but there you go.

This game was clearly one when we had to manufacture something good on defense since the offense was just struggling and Cal’s defense was playing very well, stuffing the usual throwing lanes Sam likes and doing a good job out-muscling our O-line. I’ll not get into our O-line play but I have to say that they’d better get it going on since it’s going to get a lot rougher and you can’t expect six turnovers, a missed FG and dropped passes in the end zone from future opponents every week to get our wins.

Individual performances on defense were generally good most of the time. Notably, Marvell Tell and Cam Smith racked up 12 tackles a piece (8 unassisted for Tell…wow!). I’ll just say it now that without the standout performances from Nwosu, Tell and Smith (throw in Rector too) we just might be 1-3. Our CB play was maybe ok at best. Some nice picks by Jones however both Jones and Biggie got muscled a few times by receivers which allowed them to get open. I was less than thrilled with our 4th down conversion effectiveness stopping only two out of six attempts with one of those misses for a rushing TD of one yard on the goal line. That’s big-man on big-man football and we lost…hate that. I also don’t recall a goal line stand this year by our defense but I can still picture of a few of them against us.

So this week, here comes a Friday night travel game with minimal rest and preparation for a red-hot WSU team. If you’re not concerned you should be. But, this is what championship football is all about. Beat the other guy and the Pac-12 schedulers.