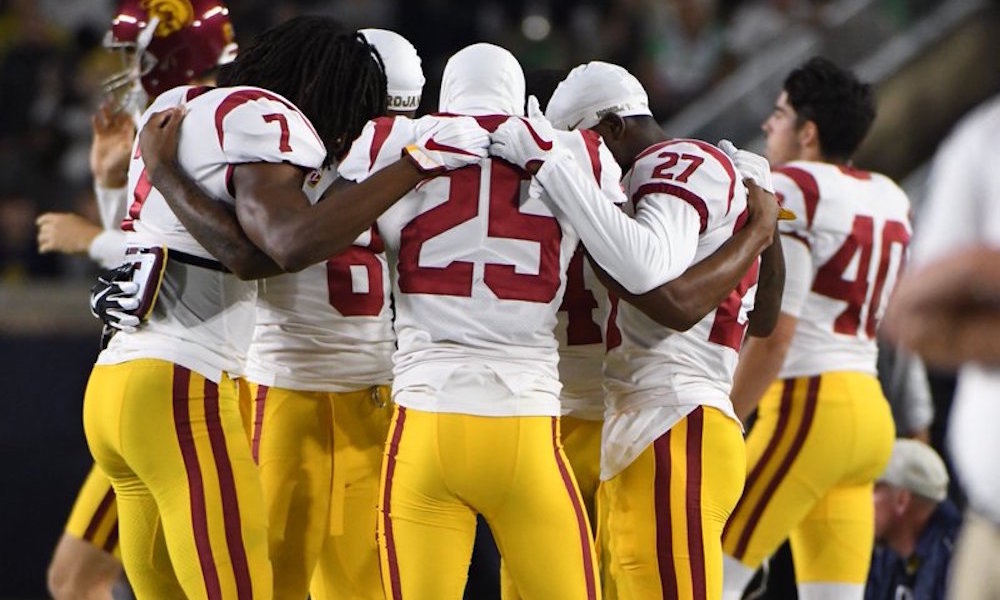 Last night’s game was an excellent “bounce-back” win after last week’s lopsided loss. I actually don’t think there was a category in which we were outplayed…literally. Furthermore, this win shows what happens when 1) you play with intensity and purpose and 2) all aspects are in-synch (coaching, play calling, specials, offense, defense, time-of-possession and 3) playmakers make big plays. It also helped to get a few guys back from the injured not-probable list (Fatu and Gustin) combined with replacements guys stepping up (Pili and Langley).

We’ve all read or heard that “the best defense is a great offense”. Ok, so it happens to be true btw and you saw it clearly on display yesterday. What happened was that the offense scored early enough and quickly enough to take ASU out of their game plan in the second quarter. When I reviewed the replay you can see that the first quarter was fairly close but with the big plays producing points then 1) the defense was off the field and 2) ASU became one dimensional and predictable (pass oriented first vs. “grind it out” and balanced).

Because of this one-dimensional beginning in Q2 was predictable and matched our defensive game plan. I was curious as to how Clancy Pendergast was going to approach the scheme for this game after last week. He started with our standard set of 2DLs with Iosefa replacing Rector at DE/OLB (now OLB and not a true DE). CP went quickly to moving Pili and Green to 3 (both outside techniques) and Cam Smith in an Eagle set to strength and Houston an A-gap. ASU should have audibled to a dive play but stayed with a flat pass (incomplete) and the next play had Nwosu with an inside move off the edge but Houston filled to the outside for contain and almost had a pick six. It was a great 3-n-out to start the game on defense. That was the same scenario as last week so the question was in mind was sustainability and “what else”? “What else” included using Gustin and Green in a strong pass rush. Green was on a mission after last week’s embarrassing performance and he sent a clear message that he’s back and serious about his play. Our run gap attack combined with Pili or Fatu with both controlling A-gaps or occupying two blockers. Secondary play was good “downhill” play on run reads with a two deep (usually) safety look on passes. Cornerback play was probably the best I’ve seen this season with both run support and pass coverage. Jack Jack had an excellent game and Langley really came to play and other than a miss in the red zone on a perimeter pass he was in good solid position most of the time.

What we saw last night was 1) simplified game plan 2) TOP win (USC 34:03 vs. ASU 25:37) 3) sound gap control with no glaring physical defeats 3) defense got off blocks well (best all season by far) 4) good secondary play for both safeties/nickels (no dime packages) and cornerbacks 5) excellent pass rush using just the four DLs producing six sacks and 6) a pick six in the fourth quarter. The defense was excellent on 3rd/4th down conversion attempts holding ASU to just 2 of 14…an incredible job while also controlling Neal Harry to only three receptions (one broken play for 70 yards). Green and Nwosu combined for six sacks after the prior week’s zero.

Apparently, we can’t have a conference game without a Pac-12 officiating controversy. Let’s face it that call reversal at the end of the first half was just a mess. Incontrovertible video evidence was required to over-turn the on-field ruling…really, that’s the requirement but I must have missed it as did the conference officiating knuckleheads.

So now we have a red hot U of A team at home this week. Tate is a freakish athlete running the perfect offense for his skill set. Ok, so here we go let’s get ready for a challenging assignment against a QB that is a defensive nightmare. I like our momentum and defensive improvement.