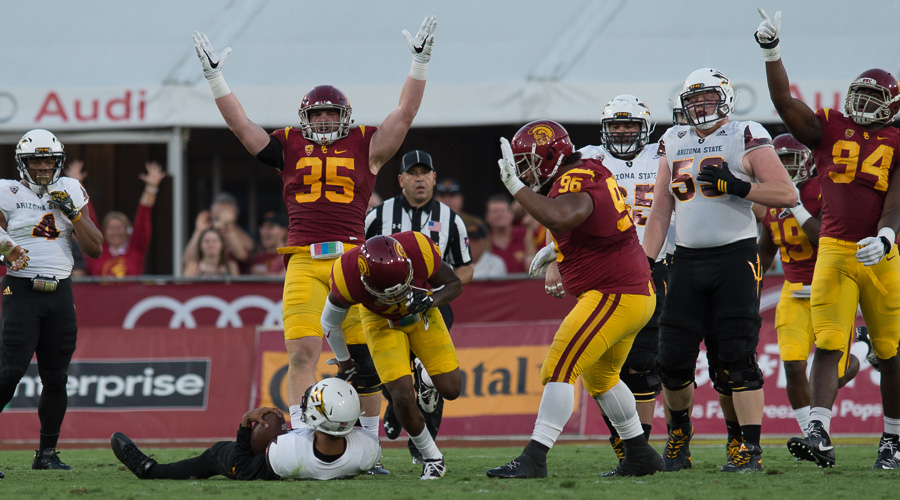 You’re probably asking yourself the same question, “where was this defense the first four games?” Easy answer; Pendergast’s playbook. Last week I noted that he uses his base scheme and then later in the season adds more complexity. Well necessity is the mother of invention so we went from the most vanilla package last week which Utah feasted on to a complex high-pressure look that worked wonders. And it was fun…

What did we do? Better question is what didn’t we do. We used the standard front (4-3 hybrid or Pendergast’s 5-2) less than 1/3 of the time. We used multiple fronts with 5, 6 and 7 on the LOS (line of scrimmage) or crowded the LOS. Most pressure came from the edges but with pretty good containment we forced the QB into pressure and ultimately out of the game. We also used delayed read blitzes (Hutchings mostly) and I noticed that these delayed read blitz is based on the RB in the backfield and no pass threat to that side and then rushed but with lane control…good discipline. We also used some CB blitzes out of nickel package and then used Jackson on man cover on that side…good scheme and execution. The success is based upon putting pressure on the QB which we were successful doing for the first time this season. Pendergast was focused on taking away the run game and forcing pass plays with the QB under duress (might have been a good idea against Stanford btw).

With the same base front but with multiple LBs and secondary crowding the LOS pass coverage was man on corner and tight zone in the seams. However we also had a lot of coverages when we moved to cover 7 and a few cover 8’s (cover 7 is 4 rushing and 7 in coverage & cover 8 is eight in coverage with 3 rushing). Usually these max coverage sets go to a zone look but we still tried to keep tight coverage unlike the last drive against Utah where we backed off. Late in the game with the 2’s and 3’s in the coverage was looser.

Overall the TOP (time of possession) was close with ASU-30:27 and USC-29:33. Ironically ASU converted 6/18 3rd/4th down conversion which is good defense to keep the conversion rate at or below 33%. However ASU held our offense to 4/15 or 27% which is even better.

Some areas that stood out to my eye included:

So this was a good introduction of what the defense should look like going forward. Pressure the QB, control the LOS gaps (not yet physically dominate), keep containment and force the pace. Hey look if you’re going to play then play all out and take some risks. We’ve been hit by explosive plays and sustained drives so go with an aggressive approach…no argument from me.

Many thanks to the San Diego Trojan Club and their hospitality. Had a great time and we got real during our Q & A. I did mention that I thought we would win by at least 14 to some of the great Trojans that were there…not prescient I just knew that this was the week we were going put some of our tools together. I’m thrilled for the players and coaches and as a fan that was fun too.