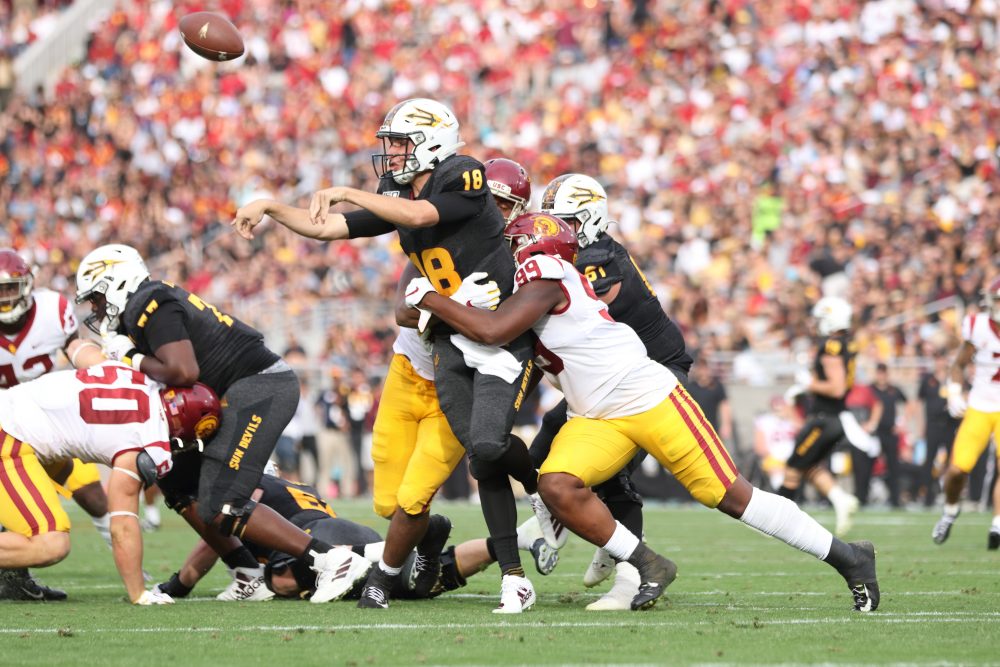 As USC football games go at least for the last several years, yesterday’s contest in Tempe was a perfect analogy of the current state of our football program. Impressively strong start offensively, then quiet down, manufacture several special teams’ breakdowns, sustain a few injuries, commit costly penalties and then perhaps prevail at the end with a victory by a big play (about a 50/50 chance of a win over the past two seasons, btw). This team and football program are not for the faint of heart and don’t ever relax. Frankly, without Rector’s outstanding tip and interception I think ASU wins that game yesterday.

1. The defensive scheme should look very familiar by now. We play four DLs, toggle in a two-point speed rusher situationally (usually Malik McClain or Eli’jah Winston and occasionally Juliano Falaniko). The secondary is a nickel-set with situational players depending on 1) Who is healthy and 2) Who Clancy Pendergast can use of his remaining secondary personnel in his QB blitzes. So, our base defense remains Pendergast’s well understood 4-2-5 but with personnel variations and some nuanced pressure packages. We were effective against the run but not the pass.

2. I noticed that Coach K adjusted our 3-tech (3i) DT to inside shade the offensive guard to get better control of the A-gaps on many first downs especially after Caleb Tremblay went down and Brandon Pili had to handle much of the A-gap control since Jay Tufele got at least double-teamed on every play.

3. You also might be wondering what the heck was going on in the secondary after the first quarter. It seemed like throwing the ball against our defense was just too easy. That was due to a combination of factors;

4. Leave it to the Pac-12 officiating to have not one but two critical plays reversed on questionable calls. This time it was to our advantage by taking a pick six off the board vs. our interception by Talanoa Hufanga.

A Note: I was genuinely surprised by the on-air trash talking regarding Urban Meyer as a coach and leader. I suspect there is some Pac-12 death wish going on when it comes to USC football. Well, screw the Pac-12 and hire the one guy that can turn this program around. We are floundering charitably put which is bad for us, the conference and the student/athletes. I for one would be ecstatic if we could bring on Coach Meyer. We passed on one elite coach already (Orgeron), so why pass on a second one?  Read Arledge’s Musings on this topic, very informative.