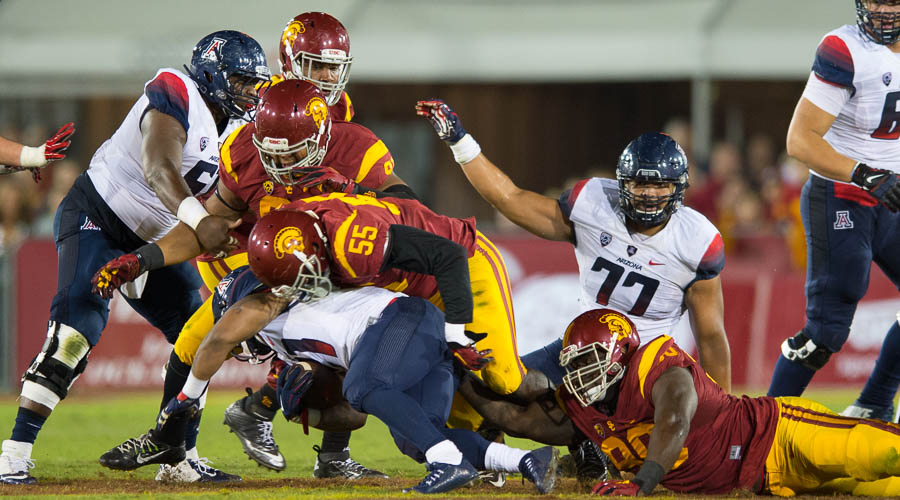 If you want to know what winning ugly looks like last night’s game was a perfect example. But being ugly with a W is a lot different than ugly with a L. On the road or against a deeper team we probably have a different outcome. But as it is we’ve now won three in a row during a tumultuous season that is now calming down and transitioning full speed into the pivotal month of November. Saturday was also a 14 point come from behind victory which is a rarity for these past 4-5 years for USC football.

So what did we learn yesterday? Well for starters it is pretty apparent that our defense is still a work in progress. Some areas seemed improved to me in particular linebacker play and reading the run/pass option. Dawson did a pretty good job in pass coverage and played a stouter run stop game than previously. Su’a played like Su’a and is the key difference and play maker on defense. Our line play was sporadic and sometimes really impressive with six sacks and ten TFL’s but at other times a mixed bag. Secondary play pass coverage was challenged regardless of coverages with 47 pass attempts but pretty effective helping to stop the run game. In the secondary everybody got burned at least once by the pass if not more and I saw quite a few blown coverages and/or mistakes. Not all together a surprise since U of A had only five first downs rushing and 16 by passing. We committed to stopping the read option run game and did a good job of that defensive aspect.

Our scheme was interesting as was the personnel rotations used. We opened with our 3-4 Hybrid but in an under alignment with the NT offset to the strong side of the center and one DT in a three technique and the other in a five. We used the rush end position to try to take away the run part of the option. I think this is why Nwosu started for the first time this season. This move added speed but Uchenna was not really effective and was cycled out by Felix. We continue to be hampered by lack of production out of the hybrid rush end and is a significant weakness in our defense. By design this role needs to be disruptive while maintaining containment with the occasional pass coverage role. Nwosu and Felix each had one tackle which is not productive and neither demanded a double team or special blocking scheme.

Our secondary coverage was man cover for the CB’s (both up and back situationally) which is our standard with safeties in “halves” or “on top” for help on the slot and/or run support. We did use some two DL sets with multiple blitzers to bring unique pressure on Solomon with some good effect but only one “jail break” rush pressure that I recall. Marshall continues to get picked apart in man coverage. I know that man coverage for a freshman is tough but he is clearly to go to defender when it’s third down and time to pass. As soon as I see the strong set away from him and he’s got single coverage and no safety help I know exactly where the ball is going…but you still have to stop it. He’s struggling. On the TD pass he got schooled again. In that set it is slot away single back with WR isolation on him. The WR slightly moved in from the sideline about 5-6 yards. He suckered Marshall into thinking fade route. Iman has inside leverage which means he absolutely positively no kidding cannot allow any inside routes. By getting suckered Marshall gave up his inside leverage responsibility bit on a foot plant fake and boom, ball arrives inside shoulder, end zone, touchdown embarrassment. I just hope somebody teaches him the basics here and or this just will continue to happen as it has all season. Look everybody gets burned occasionally but this is now obvious and all the Pac-12 knows he’s a weak link on man cover and doesn’t understand his assignments well though he is effective against quick screens and run plays and then he is an asset.

I also saw some alignment oddities that cost us two first downs. After the first quarter it became obvious that Arizona was running three basic formations…1) Slot to the strong side two RB’s, WR to weak side 2) two slots each side single back no TE 3) Two WR, two RB’s and TE. Ok so as the pattern settles down we’re getting a feel for the game and we’re attempting to pressure the QB with four and sometimes five rushers. What’s not working is getting pressure on Solomon with four rushers against five OL. That’s not good as we should overwhelm an O-line with a four on five. So later on to compensate we’re bringing a LB on read blitz which is fine. The alignment issue pops up when Townsend starts to take a 5 technique (5i to be precise) but a yard off the LOS with the LB almost stacked but slightly inside of Townsend. This is to a slot side. There is a lot of open real estate to Townsends outside and the LB can’t get to containment 5 yards off the ball. Well neither can Townsend and both times this alignment happened the Cats audiblized to a quick off tackle option read and converted both to first downs. Still trying to figure that whole deal out unsuccessfully.

Some kudos to Pelon last night as he attacked the gap several times including an excellent fourth down stop at midfield (bad call by Rodriguez btw). By doing so he got Woods freed up later and helped with sacks as a result. Nicely done and nice to have him back. He may not be the fastest but he is pretty darn stout.

I guess net we did OK. I just don’t know if we got better. U of A is an enigma offense and probably useful experience pre-Oregon. Holding them to 412 yards on 79 plays sounds good but the 30 points plus that last easy touchdowns by U of A and Utah last week gives me pause. Take the win, learn, get better, get healthy and then get ready because this season is weekly championship games and the other guys know that too.