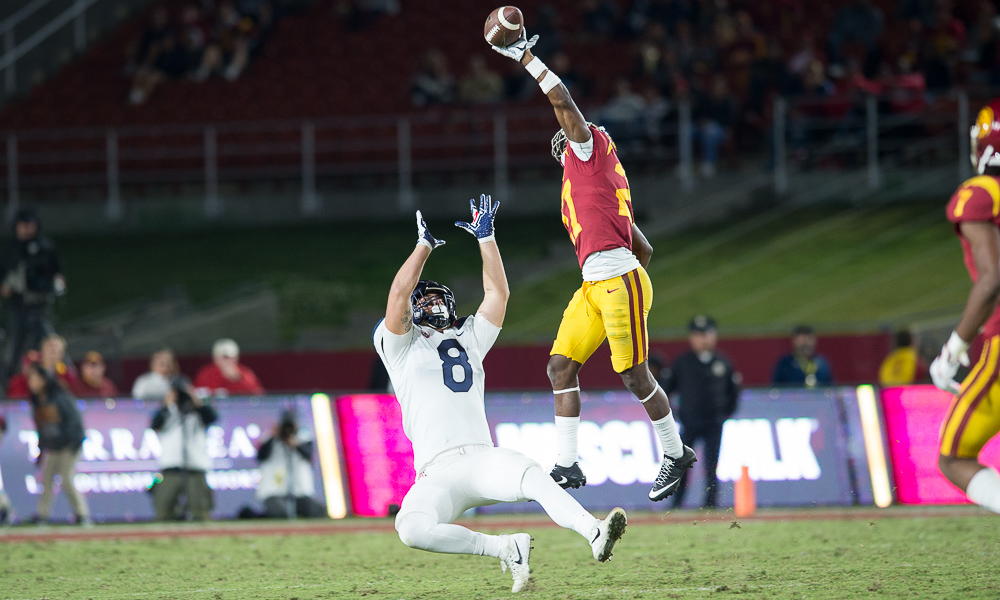 This game required a thorough re-review to really catch the details of what was going on. We saw some great defense and also some pretty ordinary effort against what is clearly one of the most explosive big play offenses currently on display in the NCAA. Let me start by saying that the defensive game plan that Clancy Pendergast (CP) drew up was brilliant…and almost wasted. The execution of his plan was on target for the first half and small portions of the second half. Then reality hit. Kahlil Tate is good; very good especially while running the ball and making plays happen. Four straight touchdowns with a two-point conversion in the 3rd and 4th quarters tying the game prove that to be so. I said all week that we had to be up by two scores in 4th quarter to win this game if U of A had the ball last and a chance to win the game. I was right and I was wrong. I’ll connect the dots a bit later.

So, what was the scheme that CP used to control U of A and QB Tate? Simple enough (same as what we ran against U-dub last season btw) but tough to execute for 74 offensive plays. He used a man-to-man match scheme with Strong Safety (Tell usually) spying Tate in the box with either the Mike or Will backers with secondary responsibility for Tate after keying on the running back. This was because there is no single defender that can match Tate on the ground. But CP also threw in additional safety help in the box on 1st and 2nd downs putting man coverage on the CB’s daring Tate to throw. In the first half U of A tried to exploit these situations with Tate throwing more deep balls which generally were ineffective. Additionally, we used on 3rd downs a pressure package with Hawkins in the box, Tell back in a one deep look with the occasional slant of the line combined with some gut blitzes (A-gaps) with Smith and/or Houston. The edges were set well and with additional support to wall off Tate from breaking down the pocket and rolling out. The defense’s job was to keep Tate in an area and take away the easy runs, reduce the throwing lanes and force him to throw accurately to move the sticks. Worked like a charm…until it didn’t. But why?

There were a number of factors that explain what happened

1. U of A did a much job in the second half taking what was given them and figuring out how to exploit 1st and second downs better to make 3rd down conversions unnecessary or much easier
2. Our offense was putting out some nasty 3-n-outs and short unproductive drives
3. Careless defensive moves causing personal fouls, offsides and other more hidden mistakes (the infamous lack of “gap integrity and bad alignment by backers and safeties)
4. Some inexplicable clock management issues that just make my head explode. I actually think this is most likely the primary culprit that as it accumulated worked against the defense. Clock management is on Coach Helton and Tee Martin. You can’t use a grind it out running game to control the clock and then combine that with an up-tempo flow. If we go up-tempo we’re not taking the clock down inside 10 seconds on every running play. Why grind it out if we’re going to leave more time on the clock for an explosive U of A big play offense?? The fact that we allowed U of A to execute 74 plays and still win is an accomplishment. Proper clock management reduces that play count to about 60 to 65 plays and the defensive effort and energy expended is more controllable. Likely fewer points allowed and less wear-n-tear on the players. We are banged up and extending the opponents play count sure doesn’t help.
5. 14 penalties leading directly to 4 U of A first downs plus extending drives is inexcusable. No excuse works here. Crappy coaching and lousy discipline especially the taunting nonsense. Hey, when you make a good play act like you’ve done it before and you expect it. Geez…
6. Pac-12 officiating. You can’t control it. Always coach players to expect the worst from the referees and you won’t be disappointed. So don’t give these clowns any reasons to throw a flag. Don’t help them, they’ll do bad all by themselves!!!! That quick whistle on a fumble recovery (reversed from the on-field lousy call) was an obscene bad call and is an example of what they can do all by themselves. Anybody remember the ASU first half Hail Mary from last week reversed call?. We won’t get a break so coach to it. Disgraceful.
7. Fatigue. Chasing and responding to Tate’s pressure is exhausting and it showed in the second half. The D was on the field too much and the O was just not making first downs, scoring or grinding the clock. You can’t do that against U of A’s offense. Keep them off the field and get a big lead and keep it.

It was enjoyable to see some special perfomances out there last night. I think most of the defensive players had their moments of great play. Iosefa, Pili, Fatu, Green (he’s hurt and fighting thru it), Hawkins, Tell, Smith (a quiet game but Smith was making some really important contributions on the LOS that are hard to see but opened up the A-gaps for others to exploit), Houston (great interception and in a critical situation), Harris, Jack Jack, Dorton, Lopes, Langley and Nwosu. Ultimately, we have enough special players and great athletes that we pulled this one out. And we did win by two scores but that sure wasn’t how I envisioned it happening.