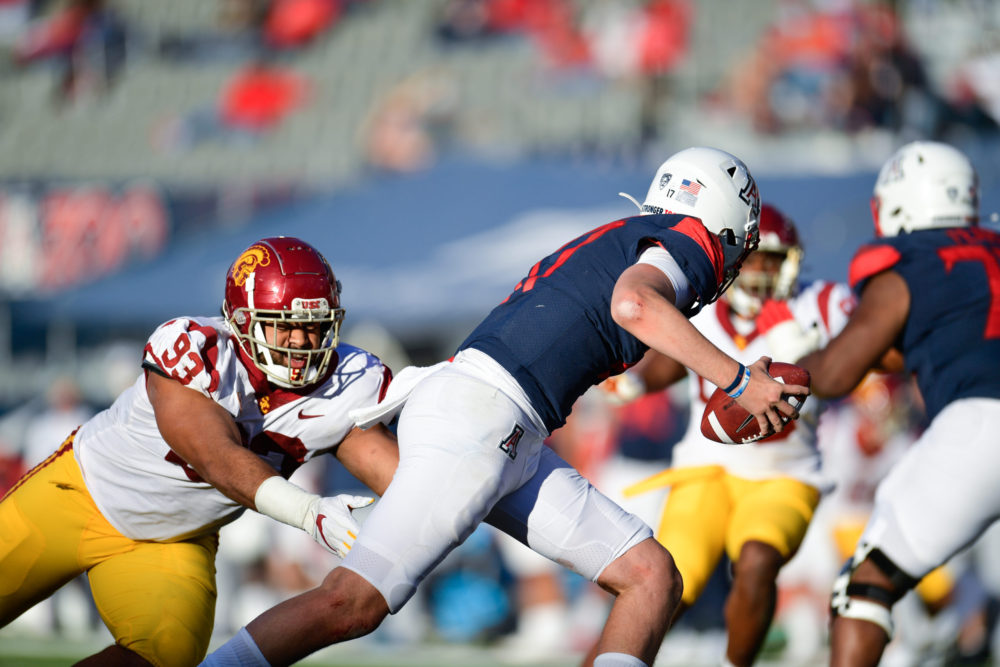 Watching this team and coaching staff is like drinking decaffeinated coffee. What’s the point and it really isn’t good for you, or something like that. You certainly get my point.

I know what I saw and don’t care about what I hear from a coaching staff that needs an intervention to admit what the problems are and specifically what they are going to do about them. This is one of those circumstances when the numbers only tell the story if you dig deep and be honest. “Hi, I’m the USC Football Coaching staff and I can’t admit the truth about:”

I’ll say this, we do get our share of lucky ball tips and missed picks. This team will show flashes of great athleticism. And really, the intensity of play is significantly improved over last season.

And I feel good about the latter improvement.

I’m going to not drift into a long commentary about our offense but I have to say that if U of A hadn’t run out of secondary players and then drop into a different man/zone coverage late in the game because they had to, I don’t think we get that win. We haven’t solved the Cover 2 with short to medium zone coverage yet. With Utah they will pressure with three and occasionally four pass rushers and really cause even more issues for Slovis. By the way, either he is hurt or he isn’t pulling the trigger as before, maybe both. He isn’t stepping into his throws and is short-arming his throws, hence the lack of spiral and floaters. Notice that when he moves around his throwing almost always improves and receivers get open better.

As for the defense, there was a change after losing EA to injury and replacing him with Raymond Scott. All of a sudden we neutralized the number one U of A rusher from the first half, who converted four first downs by way of his legs, not arm. Also, I want to personally thank the Tuipulotu family for showing up. Tuli and Marlon can show a lot of people about how to play football in the box.

There are some really good players on this team that just haven’t come together yet. An example is the 75-yard touchdown pass to U of A’s Cunningham. I confirmed with a reliable and knowledgeable Pac-12 former player and secondary coach. He confirmed that that was a “switch post.” Simply put, the safety has to read the WR and TE. If the TE gets past the inside linebackers, then he takes the TE. If there is no TE pressure, then he switches and helps “over the top” with the WR, helping the CB.

In this case there was no TE pressure but also no help for Greg Johnson and bingo, 75 yard throw and catch for a touchdown. This is poor communication and symptomatic of not playing well together.

So off we go to Utah to try and play a complete game. I don’t know how much of these issues are going to get fixed or improved as there are too many. But Utah will bring it and they know how to play Cover 2 better than anybody else in Pac-12 South. Fight on!