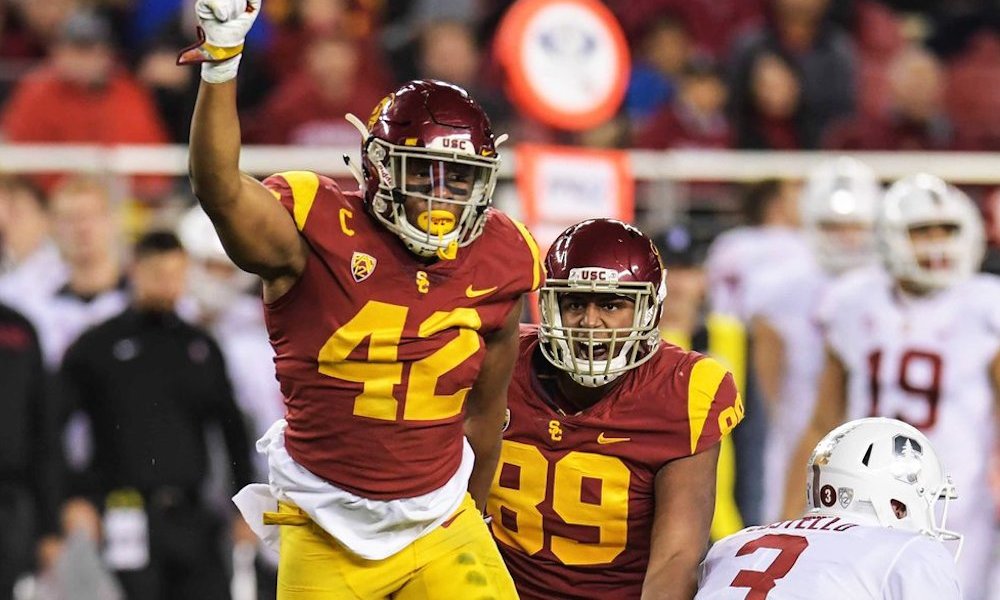 Friday night’s game was a perfect summary of this entire season; great athleticism, highlight reel plays, goal line stand drama, 99-yard drive sparked by Sam’s uncanny ability to make something out of not a lot, bone-headed special teams plays, untimely fumble, crazy penalties, a tough Pac-12 Friday night opponent and an officiating crew that seems to want to be the star of the show. But for now, congratulations to this team for earning a hard-fought and well-deserved Pac-12 conference championship. A signature championship victory so please take a bow.

There was a lot to like about what the defense did, the run fits, gap discipline and mixing up the coverages just enough to hold Stanford to 28 points including an exciting goal-line stand. The stats tell an incomplete story which is often the case. We actually gained more first downs by rushing than they did (8 vs. 9), more rushing yardage and more rushing attempts. We held ‘Furd to a total of 343 yards vs. our 501, generated three 3-n-outs and forced 4 punts and forced 4 fumbles (recovered none). And therein is the secret. We were unable to get the bounce to recovery any of these four fumbles and gain a short field or an extra drive. This allowed the game to stay closer than it should have when combined with our usual ups and downs.

Scheme-wise we saw some specially designed looks for Stanford much different than our September game or other games this season. What Clancy Pendergast (CP) dialed-up was a double 3-technique with our two ILBs crowding the A-gap. That’s not new but what is our stemming out of that look pushing one 3-tech DT back out to 5-tech with one DT moving to a 3 inside technique coupled with Mike and Will backers moving to different positions. This gave Stanford fits as they had trouble finding their assignments and we interrupted their typical line calls and plays. This also forced QB Costello to wait a bit to make a call at the LOS and he guessed wrong a number of times. Finally this look gave Nwosu a more open playing field as his assigned blocker had to hesitate to make sure that the B-gap was covered by somebody on the O-line. This sounds subtle but in the box it’s a big deal and that little bit of confusion makes a profound difference and its doubtful Stanford practiced against a look we’ve not shown before.

What I find very interesting is that our leading tackler by far was a safety (Chris Hawkins) with 14 tackles with an incredible 9 of those as solo. I noticed that Stanford’s best defensive player is their NT (Phillips) with 13 tackles. So, you have a safety and a nose tackle leading both defenses with tackles…that’s scheme and effort by both teams. I’m impressed.

What didn’t work was consistent secondary coverages. We did an impressive job on the WR fade routes but gave up too many catches and points to Stanford TE Smith who had a monster of a game. Also, we can’t hide Jack Jones and his coverage woes any longer. He is one of just a few players who has actually regressed in his skill-level and effectiveness. Langley played a more solid corner role and Harris made some excellent plays and breaks on the ball. Unfortunately, yet again Harris shows that he doesn’t focus on the finer points of the game which includes lateral passes (after his break up) are live footballs so go get it and catching a punt on our 8 yard line and running backwards to the 3-yard line aren’t really very helpful actions. If Stanford’s cover team didn’t tackle him on that punt one of our guys was going to have knock him down or give up a safety…literally true.

This was a team win all the way around with both the offense and defense answering the call when they had to. The defense was impressive not just with a goal line stand but also with a 3-n-out for a minus 13 yards after Carr’s nearly disastrous fumble in the 3rd quarter.

So, congrats to this team and we are all very proud of them. But when it comes to the Pac-12 conference let’s face it, the rest of the college football world just doesn’t think very much of the Pac-12 or us despite our 11-2 record and conference championship crown. I could start a rant here but what’s the point? So let’s celebrate the championship victory and start getting our heads wrapped around a December 29th game at Jerry’s World against what will be the best team we’ll face this season…the Buckeyes.